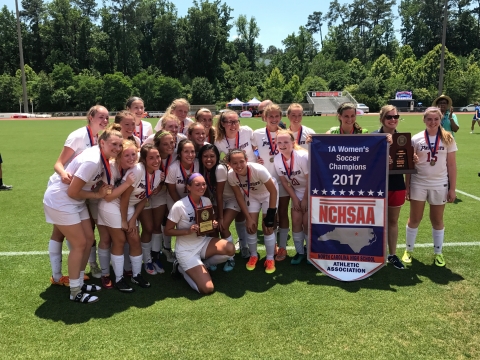 1A Championship: Franklin Academy storms back from three goals down to take out Community School of Davidson in penalty kick shootout

With under a minute to play, still trailing 3-2, Franklin Academy began applying some late pressure trying desperately to equalize. The Patriots drew a yellow card on the Spartans and a free kick from about 25 yards out as the clock trickled down to 30 seconds to play. Krussow sent in a ball targeting the upper-left corner of the goal, it was caught and then dropped by Community School of Davidson goal keeper Tori Hancock. The ball pinballed around in the box, loose for several seconds before Patriot sophomore Chloe Armitage chipped it home to tie in the closing seconds.

Franklin Academy’s Krussow was named the game’s Most Valuable Player for her solid midfield play and goal in the come-from-behind effort by the Patriots. Franklin Academy finished the season 23-2, 14-0 in the North Central Athletic 1A where they were the champions. The Patriots avenged a 5-1 loss to Community School of Davidson in last year’s 1A Women’s Soccer Final with the victory. 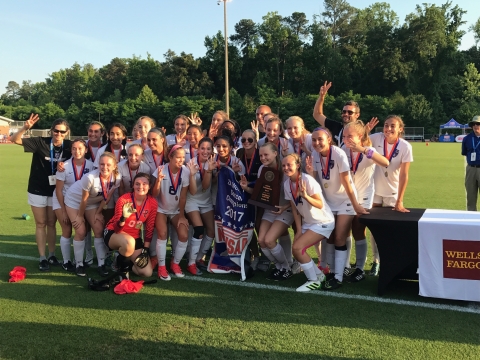 2A Championship: Carrboro gets two early, holds on for third straight title

The two-time defending 2A Champion Carrboro Jaguars quickly settled into the 2017 title game against West Stokes. The Jaguars netted two goals within three minutes of each other midway through the first half to take a 2-0 lead over West Stokes on their way to a 3-0 victory. The win lifted the Jaguars to their third straight 2A State Championship.

Carrboro senior goalkeeper Grace Nanney was tested early as she had to parry a pair very difficult shots off the foot of Zoe Wehr away to keep the game scoreless in the opening ten minutes. She ended up with six saves on the afternoon and was named the match Most Valuable Player. 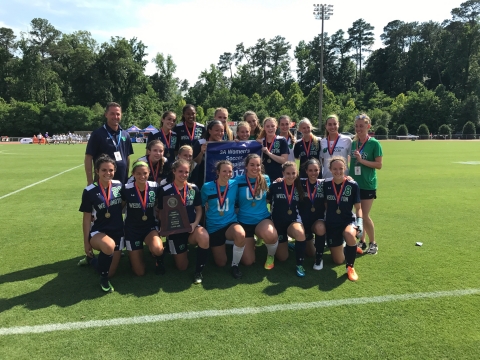 3A Championship: Weddington goes back-to-back with 1-0 win over Corinth Holders

The Weddington Warriors held off a valiant second-half effort from Corinth Holders to win the Warriors second straight state championship, 1-0 on a goal by Morgan Macia.

Weddington dominated possession in the first half and that led to an opportunity in the 28th minute for Macia who dribbled through three defenders and put home what turned out to be the game winner. Macia was named the Most Valuable Player for the 3A Championship Game. 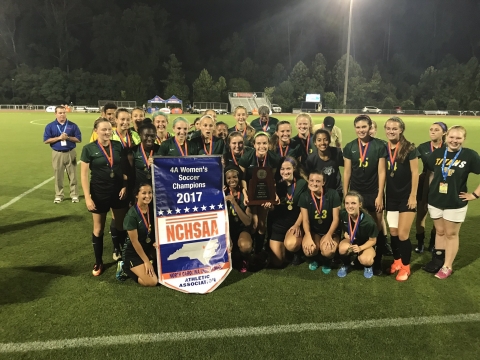 4A Championship: West Forsyth wins a thriller over Cardinal Gibbons 4-3 in overtime

In a fast-paced 4A State Championship game, it was the Titans of West Forsyth that prevailed in overtime 4-3 over Cardinal Gibbons to win the school’s first Women’s Soccer State Championship. Riley Terry unleashed her right foot on a free kick from 35 yards out that found the back of the net in the 98th minute during the second and final overtime period, lifting the Titans to the title.

Terry’s free kick came off of a tough challenge from behind by Gibbons defender Montgomery Cooling on Erin Blevins, who went down, drawing the free kick. Terry’s game-winning boot and solid defensive play made her the game’s Most Valuable Player.