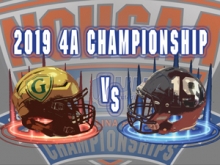 Ty’shaun Lyles was the 4A Championship Most Valuable Player for the second year in a row, leading the Eagles offensively with a pair of touchdown throws on 10 for 16 passing with 171 yards. He also rushed 17 times for 63 yards in the game.

Jacob Gill got the scoring going as Cardinal Gibbons took their opening possession eight plays and 56 yards, polished off when Gill hauled in a nine-yard scoring toss from Andrew Harvey. The throw gave the Crusaders an early 7-0 lead, but East Forsyth responded late in the quarter.

The two teams traded possessions until East Forsyth drove five plays and 65 yards in the latter part of the opening quarter. The Eagles got on the board thanks to a 59-yard pass from Lyles to Jamison Warren with 1:58 to go in the quarter, tying the game at seven.

Gibbons jumped back in front early in the second quarter when Harvey hit Cameron Noble for 40 yards and a score with just 36 seconds gone in the second frame. However, East Forsyth responded quickly as Lyles connected with Warren a second time, this one from 56 yards out to knot the score at 14 with 6:01 to go in the half.

The Eagles got a good bounce on the ensuing Crusader possession, as Jordan Timmons scooped up a Gibbons fumble and rumbled nine yards for a score to give East Forsyth its first lead of the game. The Eagles carried the lead into the locker room and added to it in the third quarter when Andrew Conrad chipped through a 31-yard field goal to extend their lead to 24-14 with 4:33 to go in the third.

Cardinal Gibbons did not go away quietly, as the Crusaders marched 10 plays and 80 yards capped off by an eight-yard touchdown pass from Harvey to Cameron Noble with just 3:42 to play, but the Eagles managed to hold Gibbons out of field goal range in the final two minutes to seal the victory.

Cardinal Gibbons finished the season 12-3, the Crusaders were 5-1 in the Cap 7 4A Conference where they were the runners-up. The program reached the NCHSAA State Championship game for the first time in school history, winning their first regional final.

East Forsyth wrapped up the year 13-2, the Eagles were 3-2 in the Central Piedmont 4A. East Forsyth won the program’s third Western Regional Championship and collected their third state championship.

The Cougars dominated the line of scrimmage, holding the Pride to just 80 yards of total offense in the game. Power Echols was named the game’s Most Valuable Player, leading the Cougars in tackles with 6.5 for the day, including 1.5 tackles for loss. He also rushed twice for 16 yards and a touchdown.

Vance opened the scoring with an 84-yard explosion for a touchdown when Austin Grier found Jordan Payne for a score, capping off a drive that started at the Cougar four-yard line. Leesville responded early in the second quarter with their only points of the game as Noah Burnette split the uprights for a 34-yard field goal to trim the lead to 7-3. Melvin Benitez answered for the Cougars with an 18-yard field goal of his own with just five seconds to go in the half, putting Vance up 10-3.

The Cougars closed out the game with a pair of touchdown runs in the fourth quarter. Daylan Smothers increased the lead with a six-yard scoring run with 9:58 to go that gave Vance a 17-3 lead. Then with 8:55 to play, Echols cashed in a 14-yard run just one play after a Leesville turnover, to ice the game 24-3.

Leesville Road reached the State Championship game for the first time in program history. The Pride finished the season 13-1, 6-0 in the Cap 7 4A Conference where they were the champions.