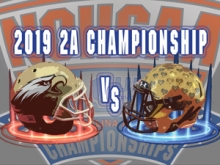 WINSTON-SALEM – The Reidsville Rams were dominant defensively and worked together just enough offense to overcome Northeastern for the second year in a row and win the school’s 18th NCHSAA State Football Championship. The Rams nipped Northeastern just one year ago, a come from behind win, 31-28.

This year, the Rams jumped out in front early and rode a strong defensive effort to the championship. Lionel Long pounded his way into the endzone with 1:38 to go in the first quarter to put Reidsville in front 7-0. Long was the workhorse for the Rams, carrying the ball 31 times for 156 yards and a single score. He was chosen as the game’s Most Valuable Player.

The only other touchdown in the game came in the closing minutes of the first half when Kyle Pinnix scampered 19 yards for a score to put the Rams up 14-0. Defensively, the Rams were led by Jiheem Hooper who accounted for 7 tackles. Stevion Harrison also had a good outing for Reidsville with a pair of sacks in the game, helping his team to hold Northeastern to just 101 yards rushing.

Reidsville outgained the Eagles 324-135, and the Eagles were led by Holden Hogde who rushed 15 times to gain 54 yards. He also threw for 31 yards in the game. Northeastern finished the season 12-4 and 4-1 in the Northeastern Coastal 2A. The Eagles reached the State Championship game for the third time in program history.

Reidsville wrapped up their season 15-1, the Rams were 4-0 in the Mid-State 2A where they were the league champions. Reidsville appeared in the State Championship game for the 24th time in school history and won a state record 18th State Championship. 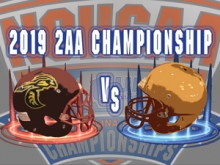 WINSTON-SALEM, NC – The Golden Lion defense was absolutely impenetrable in the 2AA State Championship Game as Shelby held Salisbury to -6 yards rushing for the game, lifting the Golden Lions to back-to-back titles and the program’s 11th NCHSAA crown.

Ja’hari Mitchell opened the scoring with 5:53 to go in the first quarter, crossing the plane from four yards out to put Shelby up 7-0. He scored two more times on just six total carries and 24 yards as he was selected as the game’s Most Valuable Player. Mtichell also threw a touchdown pass, finding Nick Stites from nine yards out in the fourth quarter for the game’s final score.

Shelby quarterback Isaiah Bess was also spectacular, completing 17 of 27 passes for 212 yards and one score as he found Diavonni Daley from 38 yards out in the second quarter to push the Lions lead to 20-0.

Salisbury was unable to muster much offensively, outgained in the game by Shelby 359-39. The Golden Lions defense held Salisbury to the fewest yards ever allowed in an NCHSAA State Championship Game since record keeping began in 1989. The 39-yard allowance was ten fewer than the previous mark of 49 yards allowed set by Robbinsville in 1992 when they held Lakewood scoreless in the 1A Championship.

Salisbury finished the season 13-3. The Hornets finished 7-2 in the Central Carolina 2A Conference and were tied for second in the league. The Hornets reached the State Championship game for the fourth time in program history.