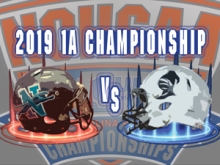 Rylee Anderson was the star for Robbinsville scoring the game’s first three touchdowns to push his team out to a 21-0 lead with 9:02 to go in the second quarter. Anderson cashed in two additional runs in the second half on his way to a fantastic 34 carry, 176 yard and five score stat line. He was named the game’s Most Valuable Player.

Robbinsville also had a great rushing performance by Lex Hooper who carried 14 times for 125 yards including his 20-yard run to put Robbinsville up 38-14 early in the fourth. While the rushing attack was dominant for the Black Knights, their defense played exceptionally, only allowing the Jaguars 65 yards via the ground and 53 through the air.

Northampton County got on the board in the third quarter with Na’Jae Newsom hauling in a 23-yard scoring pass from Zion Kendall. Just over two minutes later Kendall broke free for a 15-yard touchdown run. The Jaguars finished the season 11-4, they were 5-1 in the Tar Roanoke 1A Conference. Northampton County reached the state championship for the first time in school history and only the second time any school from the county made it to the finals, matching the 2005 team from Northampton-West.

Robbinsville wrapped up the year 15-0, they were 6-0 as the champions of the Smoky Mountain 1A Conference. The Black Knights made the program’s 17th appearance in an NCHSAA state championship game.

DURHAM, NC – The East Surry Cardinals got seven touchdown passes from senior quarterback Jefferson Boaz to knock off Tarboro 56-28 and win the program’s first state football championship. Boaz threw for 478 yards and seven scores, completing 33 of 42 passes on his way to being named the 1AA Championship Game Most Valuable Player.

Boaz set new state championship game neutral site records for most passing yards in a game, most completions in a game and most touchdown passes in a game in the effort. Stephen Gosnell and Landon Stevens hauled in the majority of Boaz’ passes Gosnell grabbed 13 for 206 yards and two scores. Stevens pulled down 10 passes for 179 yards and two touchdowns.

The Cardinals and Vikings traded first-quarter touchdowns, with both teams scoring twice in the opening quarter. Stevens broke the ice on a 39-yard heave from Boaz just a minute and 11 seconds into the first quarter. Tarboro took the ensuing possession and tied the game on a 63-yard sprint by Khalil Staton. Seven plays later, Gosnell answered for East Surry, going 41 yards on a pass from Boaz with 5:08 to go in the first. Thenk Kimani McDaniels slipped 21 yards to the house to knot the game at 14 heading to the second quarter.

Initially, in the second quarter, it appeared neither team would stop the other, as East Surry took a 21-14 lead on a one-yard sneak by Boaz with 7:43 to go in the half. Just two plays later, Travis Johnson ripped off a 59-yard touchdown run to bring Tarboro back even again with 7:09 to go. But after that Tarboro touchdown, East Surry went on to score 28 unanswered points, all on Boaz touchdown tosses, to pull out to a 49-21 advantage early in the fourth quarter.

Dillon Mosley grabbed two of those touchdowns passes in the 28-point run and capped off the night with an 11-yard scoring reception to round out is 6 catch, 42-yard night. East Surry’s defense successfully limited the powerful Tarboro rushing attack, holding all four primary backs to under 100 yards rushing, though Tarboro still managed to rush for 242 yards in the game.

Tarboro finished the year 14-1, they were 6-0 in the Coastal Plains 1A Conference where they were the champions. The Vikings made the school’s tenth appearance in an NCHSAA state championship game.

East Surry wrapped up the season 15-0, they went 5-0 in the Northwest 1A Conference, winning the league title. The Eagles won the Western Regional for the second time in program history and claimed the program’s first state championship.