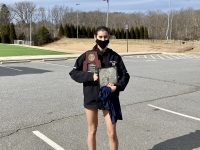 KERNERSVILLE, NC – Pinecrest’s Carmen Alder won the individual title, the third of her outstanding high school career on Friday in the NCHSAA’s first state championship event since the COVID-19 outbreak shut down high school athletics in North Carolina in March 2020. Alder completed the course at Ivey Redmon Park in 17:47.30 besting her younger sister Vanessa, who finished second, by more than 55 seconds. 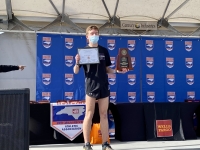 Murphy Smith, a senior from, claimed the men’s individual title, nipping Wesley Haws from Cardinal Gibbons. Smith crossed the line in 15:44.65 just in front of the first heat time of 15:46.59 set by Haws. Maddon Muhammad from Myers Park paced much of the first heat of the day before a strong kick from Haws. Muhammad placed third with a time of 15:58.03.

The Hoggard women grabbed their second straight team championship, outrunning Panther Creek 96-101. The Viking women averaged 19:44.74 to the Catamount’s 19:48.39. Hoggard was led by sophomore Molly Parker who finished third overall with a time of 18:49.13. 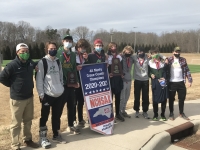 The Men’s Team Championship race was incredibly tight with Cardinal Gibbons edging Hoggard 103-105. The Crusaders averaged 16:47.02 for their top five runners while Hoggard blitzed to an average finish of 16:54.92. Haws made the difference for the Crusaders, landing as the only runner on either of the top two teams to finish in the top ten individually. 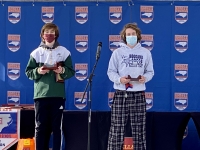 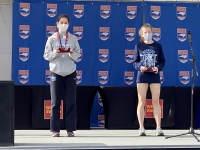 The NCHSAA is proud to highlight outstanding sportsmanship and annually presents the NC Farm Bureau Sportsmanship Awards at each NCHSAA State Championship event. One member of the top two men's and women's teams are selected for the annual Cross Country Award. This year’s winners for the 4A women’s meet were Erin Johnson from Hoggard and Molly Haggerty from Panther Creek. The winners on the men’s side were Brady Colford from Cardinal Gibbons and Luke Ward from Hoggard.