KERNERSVILLE, NC – North Lincoln’s runners dazzled in the 2A NCHSAA State Cross Country Meet at Ivey Redmon Park. The Men’s team and women’s both cruised to state championships, the men grabbing their fourth straight while the women secured their first in program history. 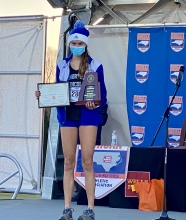 North Lincoln’s Angie Allen destroyed her own 2A State Meet Record for the course at Ivey Redmon Park, posting a time of 18:05.50. Her time shattered the previous 2A State Meet mark that she set a year ago on the course in 2019 when she finished in 18:42.23. Allen bested the field by more than a full minute with Lincolnton’s Katherine Hopkins crossing in second with a time of 19:23.93.

Atkins senior Walter Sellers sped through the course in 15:40.86, narrowly missing the 2A State Meet Course record for the Ivey Redmon Complex Course. The mark is still held by the 2019 performance of Jason Thomson from North Lincoln who posted 15:40.66 on the same trail. Sellers run helped push Atkins to a second-place finish as a team, averaging a time of 16:54.45. 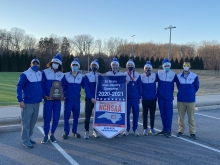 North Lincoln men ran away with the meet, defeating Atkins by a 40-79 margin. The Knights were led by Miles Phillips who finished second in the meet with a time of 15:51.39. Teammate Jacob Scott was just on his heels at 15:54.64 in third overall with fellow squad members Stephen Fernetti and Jared Campbell posting top-ten overall finishes in the race. The group combined for the school’s sixth Cross Country State Championship on the men’s side. 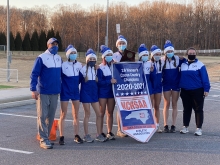 The NCHSAA is proud to highlight outstanding sportsmanship 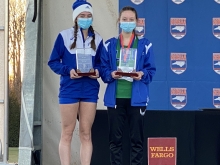 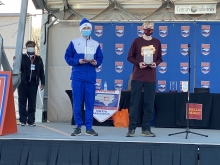 and annually presents the NC Farm Bureau Sportsmanship Awards at each NCHSAA State Championship event. One member of the top two men's and women's teams are selected for the annual Cross Country Award. This year’s winners for the 2A women’s meet were Carla Castro from North Lincoln and Abby Farris from Lake Norman Charter. The winners on the men’s side were Ethan Davis from North Lincoln and Walter Sellers from Atkins.