Neither team led by more than eight at any point in the game during a game with six lead changes and two ties. Both teams held their largest leads during the third quarter as Southeast worked their way out to an eight-point lead with 7:24 to go in the quarter before Cuthbertson whittled that lead down and built a six point lead of their own with a 13-0 run capped off by Kayla Young’s jumper at the 1:09 mark to put the Cavaliers up 39-33. 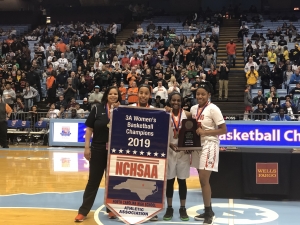 Southeast Guilford’s Kennedi Simmons led all scorers in the game scoring 27 points with a pair of rebounds and an assist as she was named the Kay Yow Most Valuable Player for the 3A Championship Game. Her teammate Kristen Roberts was the only other Falcon in double-figures, scoring 13 points with 2 rebounds as she was selected as the Most Outstanding Player for Southeast Guilford.

Maddie Dillinger led the way for the Cuthbertson Cavaliers, scoring 17 points with seven rebounds. She was chosen as the Cavalier’s Most Outstanding Player. Lauryn Haridman had 11 points and eight rebounds while Kayla Young added 10 points and four rebounds for the Cavaliers.

Cuthbertson finished the season 29-4 on the year. The Cavaliers went 12-2 in the Southern Carolina 3A Conference and claimed the school’s first Western Regional Championship in Women’s Basketball.

Southeast Guilford wrapped up the year 27-3, 14-0 in the Mid-Piedmont 3A Conference. The Falcons won the Eastern Regional Championship for the first time in school history, claiming the school’s first appearance in the Women’s Basketball State Championship Game.

The NCHSAA, in partnership with the North Carolina Farm Bureau, is committed to recognizing outstanding sportsmanship. Prior to the start of the game, the Association recognizes one individual from each team with the 2019 North Carolina Farm Bureau Sportsmanship Awards. This year’s recipients were Kennedi Simmons from Southeast Guilford and Avery Urquhart from Cuthbertson.