1A: Uwharrie Charter hangs on to 36-32 victory over Robbinsville for first Dual Team Title 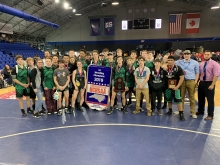 GREENSBORO – The Uwharrie Charter Eagles ran out to an early 15-0 lead in the first three matches and managed to hold off a hard-charging Robbinsville squad 36-32 in closing matches to win the school’s first dual team wrestling championship.

Josh Poteat started things off quickly for the Eagles, pinning Robbinsville’s Luke Wilson in 1:13 to put Uwharrie Charter up 6-0. Then Hayden Waddell received a forfeit win to push the Eagles out to a 12-0 lead and Timmy Blake followed that up a 132-pounds with a 5-0 decision win over Braden Millsaps to make the deficit 15-0.

Robbinsville was not deterred and responded with back-to-back wins by pin as Nathan Fisher and Kade Millsaps won by fall at 138-pounds and 145-pounds respectively to cut the lead to 15-12 in favor of the Eagles. Caleb Bryant was able to stem the Knights momentum, holding on for a 4-2 decision victory over Robbinsville’s Cooper Cable. Then Jerry Jimenez followed that up by pinning Kamron McGuire at the 4:36 mark of the 160-pound bout to give Uwharrie Charter a 24-12 lead.

Austin Lovin kept Robbinsville within striking distance as he won a 9-2 decision at 170-pounds, beating Uwharrie Charter’s Garrett Smith to trim the advantage to 24-15. However, in the next match at 182-pounds, Isaiah Martin stunned Jaret Panama, pinning him in just 0:09 seconds and putting the Eagles ahead comfortably 30-15.

The Knights battled back with a 7-2 decision win by Payne Anderson at 195-pounds and a win by fall at 3:53 by Isaac Wilkinson over Aiden Carter to cut the deficit to 30-24. But in the 285-pound bout, Robbinsville’s Kyle Fink was disqualified during the match, giving Sergio Saldana the victory and Uwharrie Charter a 36-24 lead with just two matches remaining.

Jaden Nowell went to work at 106-pounds for the Knights, pinning Gage Beal in just 1:36 and cutting the lead in half to 36-30. Matt Lovin did get a sudden victory decision win, 4-2 over Heaven Fitch, but the win was not enough for the Knights to overcome the deficit, and Uwharrie Charter hung on for a 36-32 victory. 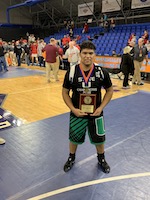 The NCHSAA is committed to recognizing and upholding good sportsmanship throughout the season. The 2019 winners of the North Carolina Farm Bureau Sportsmanship Awards were Sergio Saldana from Uwharrie Charter and Colton Phillips of Robbinsville.

·      *Denotes Dual began at this weight class; winner in bold

·      Robbinsville was docked a team point in the third period of the 113-pound match for unsportsmanlike behavior from the bench.

2A: West Lincoln runs away with back-to-back titles with 60-14 victory over Croatan 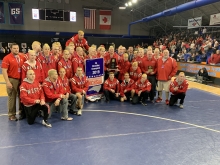 West Lincoln got seven wins by fall to capture the team’s second straight NCHSAA 2A Dual Team Wrestling Championship in a 60-14 win over Croatan. The Rebels reeled off five straight wins by pin, starting at 160-pounds with Canon Bridges and ending with Harley Scronce’s pin of Walker Gladwell at 220-pounds.

The most outstanding wrestler for the tournament for West Lincoln was Brock Steele who secured a victory by decision in the 285-pound class. Steele was a decision winner 5-3 over Nathan Waltrip stretching West Lincoln’s advantage to 51-14.

Croatan started off strong, with Luke Walker winning a 7-2 decision victory over Chade Norman in the opening match at 120-pounds. After a forfeit by the Cougars at 126, Anthony Marello pinned Chance Norman at 5:02 in the 132-pound bout. Marello’s win gave the Cougars a short-lived 9-6 lead. But pin wins by West Lincoln’s Ricky Reynolds and Xander Pendergrass in the next two matches pushed the Rebels lead out to 18-9. Justin Jolin dominated his 152-pound bout to put the Cougars back in the dual, picking up a win by technical fall, 16-0, and cutting the West Lincoln lead to 18-14 before the decisive run of fall wins by West Lincoln.

The NCHSAA is committed to recognizing and upholding good sportsmanship throughout the season. The 2019 winners of the North Carolina Farm Bureau Sportsmanship Awards were Anthony Marello from Croatan and Luke Stewart for West Lincoln.

·      *Denotes Dual began at this weight class; Winner in bold 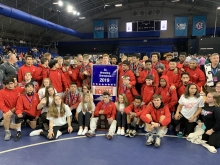 The St. Stephens Indians got a win by fall victory from Coy Reid in the 106-pound bout to clinch the school’s first dual team wrestling state championship. Reid pinned Demetrius Oxendine from Cape Fear at the 1:20 mark, stretching the Indians’ lead to an insurmountable 35-25 with just one bout remaining.

Tariq Shuford set the tone early for St. Stephens with a win by technical fall in the first match of the dual, 120-pound. Shuford hammered Carson Boisvert 16-1 to put the Indians up 5-0 early. But Cape Fear, as they would do almost the whole dual, responded quickly, as Triston Chapman won a major decision 16-5 over Dalen Milligan to cut the St. Stephens lead to 5-4. St. Stephens and Cape Fear traded pins in the next two matches as Graham Ormand from St. Stephens stapled Jose Paz at the 2:35 mark and Jeremiah Smith nailed Garrett Bolling in 138-pounds at 3:40.

The Colts got their first lead of the day when Dallas Wilson knocked off Blake Baker 11-4 in the 145-pound division, putting the Colts in front 13-11. They added to that lead in 152-pounds as Woodson Young edged De’Untae Henry 5-4 and put Cape Fear up 16-11.

The lead swings continued the remainder of the dual, with Ivan Vergel putting St. Stephens up 17-16 after his win by pin at 160-pounds over Jaleel Parks. Cape Fear answered right back with a pin of their own in 170-pounds as Jared Barbour tacked Dorian Whitworth to the mat at 0:47 second mark and the Colts led 22-17.

But St. Stephens won the next three weight classes with a 2-0 decision win by Jordan Bolling at 182-pounds, a 5-1 decision win by Dakota Metcalf at 195-pounds and a win by fall at 0:42 in the 220-pound division when Salvador Gilvaja pinned Nick Mincacapelli to give St. Stephens 29-22 advantage with just three matches to go.

Cape Fear’s Vincent Valentin gave the Colts a chance at a come-from-behind victory late as he downed Ryan Campbell in an 11-6 decision. That brought the Colts to within striking distance at 29-25, but ultimately Reid’s pin in 106-pounds for St. Stephens was a decisive blow. 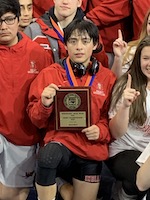 Jovanny Urzua was the tournament Most Outstanding Wrestler for St. Stephens and he got another win by pin in the final match at 113-pounds, pinning Collin Gaddy to make the final margin 41-25.

The NCHSAA is committed to recognizing and upholding good sportsmanship throughout the season. The 2019 winners of the North Carolina Farm Bureau Sportsmanship Awards were Austin Hunt from Cape Fear and Dorian Whitworth from St. Stephens.

4A: Northwest Guilford storms back in upper weight classes to take 33-27 decision over Laney 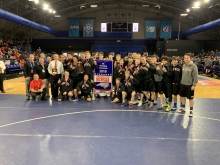 The Northwest Guilford Vikings trailed almost the entire dual before flipping the dual score in their favor with a pair of wins by fall consecutive bouts in 195-pounds and 220-pounds on their way to holding off Laney 33-27 for the school’s first Dual Team Championship.

Northwest Guilford’s Chris Garrison pinned Jonathon White at 2:56 in the 195-pound match, tying the dual at 21-21, the first tie of the dual. Then the Vikings saw Jacob Hardy pin Tyler Feuston just 1:46 into their match at 220, putting Northwest Guilford up for the first time all afternoon at 27-21.

Stephen Vega picked up a critical win by decision, 2-1 over Emmanuel Bell in the 285-pound bout, and forced Laney to wrestle under extreme pressure in the final two matches as the Vikings held a 30-21 advantage after the decision win. 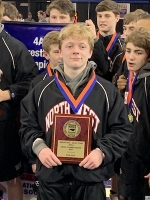 Laney’s 106-pound entrant, Mark Samuel rose to the challenge, pinning Chance Abel at 1:58 in the match, narrowing the Viking lead to 30-27 and setting up a decisive bout at the 113-pound class between Northwest’s Riley Edwards and Evan Kite. While Kite kept things interesting for the first two periods, Edwards held on, picking up a few escape and reversal points to stretch out a lead 7-0 late in the third. Edwards held on for the decisive decision, 7-0, and was named the 4A Most Outstanding Wrestler of the 2019 Dual Team Tournament.

The NCHSAA is committed to recognizing and upholding good sportsmanship throughout the season. The 2019 winners of the North Carolina Farm Bureau Sportsmanship Awards were Evan Kite from Laney and Stephen Vega from Northwest Guilford.