CHAPEL HILL— Emani Foster from Vance County High School and Savone Tutt from Pamlico County High School have been named recipients of the NCHSAA Performance of the Week award. Each week two athletes in North Carolina High School Athletic Association competition are selected for this award from nominations received from coaches, media, and school administrators. 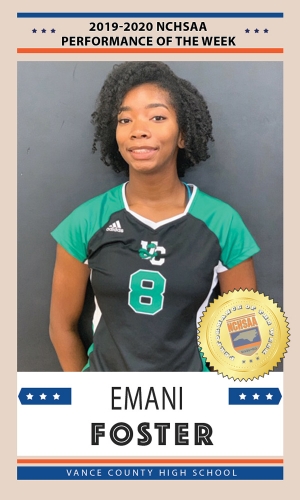 Foster, a senior on the Vance County Volleyball team, recorded 101 kills, 41 digs, 23 blocks, and 3 aces in 3 games last week.  Her 52-kill performance against Northwood was the second-highest total ever recorded in a single match in NCHSAA history.  Emani now holds the top 3 single match kill totals in NCHSAA competition. 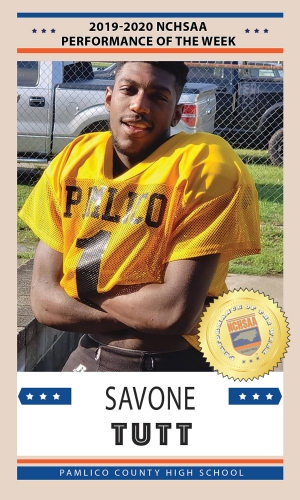 In another record-breaking performance, Savone Tutt accounted for 527 all-purpose yards and a state record 9 total touchdowns as Pamlico defeated Riverside 72-56.  The junior running back had 19 carries for 369 yards and 8 rushing touchdowns to go along with a 79-yard kickoff return for a touchdown.  Tutt also rushed for three 2-point conversions bringing his total points scored to 60, another NCHSAA single-game record.