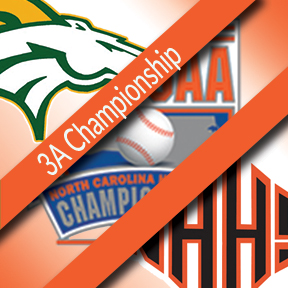 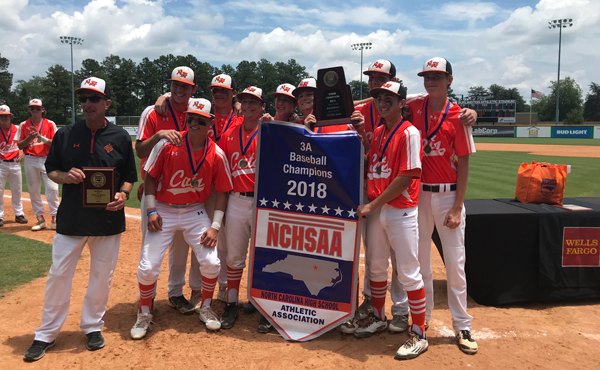 BURLINGTON – The New Hanover Wildcats claimed their third state championship since play went to four classifications in 1960 with a 2-1 win in game two of the 3A Baseball State Championship. The Wildcats swept the series with the win, earning their first title since back-to-back 4A Championships in 1993 and 1994.

Crest opened the scoring, taking their first lead of the series in the top of the fourth. Luke Scism slapped a ground ball to left, pushing across Riley Cheek who singled to open the inning. Scism was 3 for 3 on the game and the RBI single gave Chargers a 1-0 lead, but that advantage would not last long.

In the bottom of the fourth, New Hanover’s Brett Kemp doubled with two outs. That brought up Blake Walston who hit a ground ball to second but reached on an error that brought Kemp around to tie the game at 1. 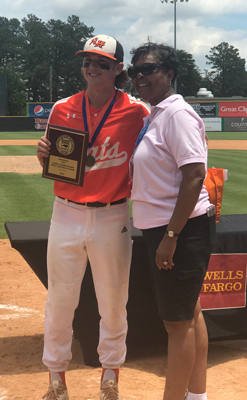 The Wildcats took the lead in the bottom of the fifth on a two-out solo homer by Jac Croom. Croom was named the series M.V.P. Croom finished the series 3 for 6 at the plate with 3 runs scored, a homer and three RBI’s.

Brayden Barry went the distance for New Hanover, scattering six hits while striking out six and walking one. Barry allow just the one earned run in the outing.

New Hanover finished the year 28-1, claiming the school’s first state championship since 1994 in Baseball. The Wildcats completed their quest for a title after falling short in the 4A Championship series a year ago when T.C. Roberson won the crown.

BURLINGTON – The New Hanover Wildcats returned to the NCHSAA Baseball State Championship Series for the second consecutive year, facing a fellow returning team, the Crest Chargers for this year’s 3A crown after both finished runners-up a year ago. In game one, it was the Wildcat bats that stole the show as New Hanover jumped out to a 5-0 lead and never looked back on the way to an 8-4 victory in game one of the best-of-three series.

The Wildcats opened the game with a leadoff double by Jac Croom, before back-to-back one out doubles by Kyle Smith and Brett Kemp plated the game’s first two runs. New Hanover tacked on three more in the second to stretch the lead to 5-0 on a Max Hildreth three-run homer.

Crest chipped away at the lead, scratching out one run in the bottom of the second and another in the third. The Chargers got on the board with an RBI double by Riley Cheek in the second that plated CJ Mayhue. It was a bases loaded walk pushed across another run in the third to make it 5-2 in favor of New Hanover.

The Chargers made things very interesting in the bottom of the fourth, plating two runs and cutting the Wildcat lead to 5-4. John Kyle Mitchell singled but a throwing error let Cheek make his way home from third to cut the lead to 5-3. Then Mayhue singled to right field to bring Mitchell around from second for the second run of the inning.

New Hanover loaded the bases in the top of the sixth with two away, but the Chargers couldn’t work out of the jam. Croom singled to right field to bring in a pair of runs, pushing the New Hanover lead out to 7-4.  The Wildcats tacked on an insurance run in the seventh as Alex Sniffen drove home Kyle Smith with one out in the seventh on a single to left.

Crest dropped to 27-4 on the year while New Hanover improved to 27-1 on the season. The Wildcats can close out the best-of-three series with a win Saturday. Game two is scheduled for 11:00 a.m. at Burlington Athletic Park on Saturday.