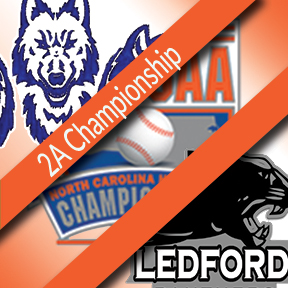 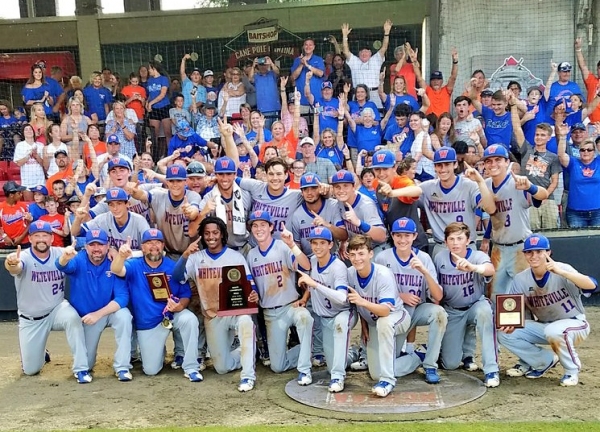 ZEBULON – Whiteville used a four run fifth inning to slide by Ledford 6-4 and win the program’s second straight state baseball championship, this one at the 2A level. The Wolfpack took home the 1A Championship a season ago downing Murphy in two games.

Whiteville got on the board first as Dylan Lawson ripped a double to right field that scored Joey Kurtyka and put the Wolfpack up 1-0. However, Ledford responded with a pair of runs in the top of the third to take the lead back. The Panthers scored on a sacrifice fly by Cameron Mills that plated Eric Sidden to tie the game at 1. Then Logan Whitaker had an RBI bloop single to right that scored Zack Weant.

Whiteville answered right back in the bottom of the third as starting pitcher Jake Harwood helped his own cause reaching on an error that saw Will Hinson score to tie the game at 2. Ledford pushed in front once more in the top of the fourth when Avery Cain singled home Ayden Holt to make it 3-2. The Panthers extended their lead by one in the top of the fifth when Holt drove in Mills on a line shot to left field. 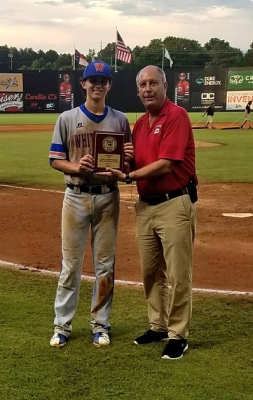 The Wolfpack exploded for four runs in the bottom of the fourth inning to take the lead 6-4. Series M.V.P. Brooks Baldwin started the inning off with a leadoff single to left. He moved up on a wild pitch and then stole third before Harwood slashed a ball to the third baseman that created an error in the field and saw Baldwin touch the plate to trim the lead to 4-3. Then Lincoln Ransom singled to left to put Harwood across and tie the game.

With two outs in the big inning for Whiteville, the Wolfpack got an RBI single Dylan Lawson that gave the Wolfpack the lead again at 5-4. Then Earl Grubbs singled to left bringing Kurtyka around to score and putting Whiteville in front 6-4, which ended up the final margin.

2A Baseball Championship: Whiteville forces game 3 with an 8-3 win over Ledford

ZEBULON – The Whiteville Wolfpack powered their way to an 8-3 victory and forced a decisive game three for the 2A State Championship Series. The Wolfpack got a strong complete game performance from their ace, Brooks Baldwin, to push the series to the final game.

Whiteville struck quickly, pushing across a run in the top of the first on a two-out RBI single by Logan Hooks that scored Jake Harwood. Both teams stayed quiet until the top of the first when Whiteville tacked on two more runs to stretch their lead to 3-0. Earl Grubbs singled to left field scoring Joey Kurtyka. Then Matthew Smith doubled to center, plating Dylan Hamilton, but Grubbs was tagged out at the plate for the third out of the inning.

Ledford responded in the bottom of the fourth with Noah Soles singling in Chris Villaman to get the Panthers on the board, trimming the lead to 3-1. Whiteville managed to limit the inning, giving up another run, but turning a 6-4-3 double play to grab two outs and make the score 3-2.

The Wolfpack struck for two runs in the fifth, Brooks Baldwin rounded the bases on an inside the park homer to right to lead off the frame and make it 4-2. Whiteville added one more as Logan Hooks plated Jake Harwood on a sacrifice fly to give the Wolfpack a 3-run lead.

Ledford managed to scrape one more run across, trimming the lead back to two in the bottom of the fifth as Chris Villaman doubled home Cameron Mills with two outs. Baldwin cruised the remainder of the way, finishing his pitching day with a complete game, allowing 3 earned runs with five hits and eight strikeouts.

Whiteville added three more runs in the top of the sixth, as they stretched the lead to 8-3, holding on for the game two victory. Ledford fell to 29-4 on the year, snapping a 9-game winning streak. Whiteville improved to 28-2 on the season, forcing a decisive game three at Five County Stadium. First pitch is scheduled for 5:00 p.m. in Zebulon.

ZEBULON, NC – The Ledford Panthers jumped on Whiteville early, scraping out two runs in the first inning before they ripped off a 10-0 win in five innings over Whiteville in game one of the 2A Baseball State Championship.

The Panthers got a one out-walk from Chris Villaman in the top of the first, advancing to third on a double by Logan Whitaker. Noah Soles singled to right, plating the first run of the game by scoring Villaman and advancing Whitaker to third. Whitaker scored on an RBI ground out by Will Bethune to make it 2-0 after a half inning.

Ledford added four more in the second, stretching their lead to 6-0. The inning again started with a walk, as Avery Cain drew the one out-walk followed by a walk for Zack Weant. Weant was cut down at second for the second out of the inning as Cameron Mills reached on a fielder’s choice putting runners. Villaman doubled to score both runners, stretching the Panther lead to 4-0. Villaman scored on a single by Whitaker, and Whitaker later came around to score an error in left field.

The Panthers tacked on three more runs in the top of the third, pushing their lead to 9-0. The runs came after a single and a pair of walks loaded the bases with one out. Aydan Holt scored on a wild pitch before Eric Sidden scored on a squeeze bunt with the bases loaded by Mills. Then Weant came across for the third run of the inning with another wild pitch.

Ledford raised the lead to 10-0 with a run in the top of the fifth, with Mills scoring on a sacrifice fly by Villaman. Villaman was the star offensively for Ledford as he went 1 for 2 with 2 walks, 2 runs scored and 3 RBI’s.  He also threw the complete 5 innings, allowing only 2 hits while striking out 8 without issuing a walk.

Whiteville fell to 27-2 on the year and snapped a 26-game winning streak with the loss. Ledford pushed their record to 29-3, winning their ninth straight and need just one win to close out the 2A State Championship Series when it resumes tomorrow. Game two is scheduled for 11:00 a.m. at Five County Stadium in Zebulon on Saturday.