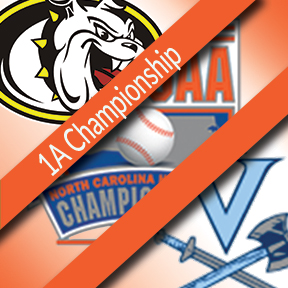 1A Baseball Championship Game 2: Murphy strikes for five in the seventh to stun West Columbus 8-5 and take the school’s first baseball championship 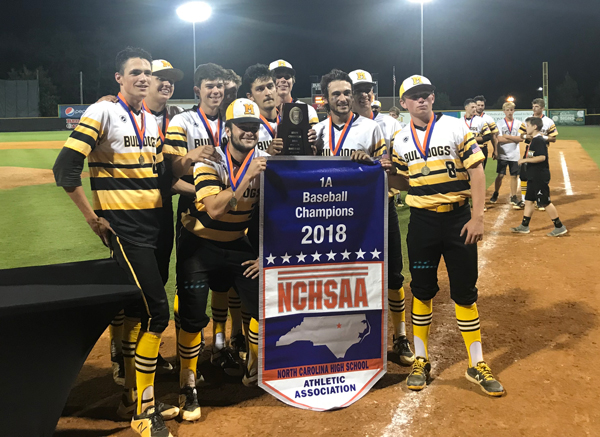 BURLINGTON – The Murphy Bulldogs found themselves trailing by a single run heading into their last at bat of game two in the 1A State Baseball Championships. The Bulldogs pressed to a five-run frame, flipping all the pressure onto West Columbus and taking the lead 8-4 before holding off the Vikings in the bottom half of the inning to get an 8-5 victory and earn the school’s first baseball state championship.

With his Bulldog’s trailing by a single run, Murphy’s Lucas Barolet started off the top of the seventh reaching on a fielding error and was sacrificed over to second. Then Joey Curry singled to center field, plating Barolet to tie the game at 4. Then Royce Peterson ripped a single to left pushing Curry across for the go-ahead run. After a walk was issued to Nathan Barolet, Caleb Irwin cleared the bases with a 2-RBI triple to make it 7-4. Travis Seabolt brought him home with an RBI single to left. 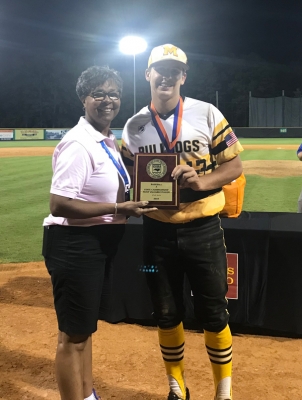 Curry came on to relieve Nathan Barolet in the seventh with a four-run lead. Curry surrendered one run, unearned, with two hits and a strikeout to close down the game and nail down the Bulldogs first baseball state championship. Nathan Barolet went six innings, striking out eight, while issuing six walks and surrendering four runs, all earned. He did earn the win in the game.

West Columbus jumped out to a lead again with a pair of runs in the bottom of the first inning. Jerry Locklear, Jr. snapped a 2-RBI double to left scoring Timothy Soles and Jagger Haynes. Murphy trimmed that lead to 2-1 in the top of the second when Travis Seabolt singled to right to drive in Kendall Keating.

The Bulldogs briefly jumped out in front in the top of the third, scoring two runs to go up 3-2. Peterson singled to short, scoring Jeremiah Clark, then Nathan Barolet’s fielder’s choice drove Curry home.

West Columbus responded in the bottom of the fourth with two runs of their own. Haynes singled to right knocking in Dylan Blackwell to tie the game at three before Nigel Ceesay took the plate on a steal of home to go up 4-3. The Vikings appeared to be in cruise control through the fifth and sixth innings, as Haynes only allowed a single base runner through the two frames before Murphy exploded for the decisive five-run blow in the seventh.

1A Baseball Championship: Murphy claims game 1 in a 7-5 slugfest over West Columbus

BURLINGTON – The bats were lively in the first four innings of the 1A Baseball Championship Series between West Columbus and Murphy. However, it was the Murphy bats that prevailed in a 7-5 slugfest with the Vikings.

West Columbus jumped out to a 2-0 lead in the top of the first, loading the bases with a walk, single and hit by pitch. The Vikings pushed two across when Jerry Locklear, Jr. lifted a fly ball to center, reaching on an error that plated two runs. The Vikings added another run in the top of the second as Timothy Soles gave West Columbus a 3-0 lead with an RBI sacrifice fly.

Murphy finally got on the board in the bottom of the second, as Lucas Barolet singled to left field to bring home two runs. The two-RBI single trimmed the West lead to 3-2, but the Vikings pushed that advantage back out to three in the top of the third with a pair of RBI singles by Locklear and Cody Benton to make it 5-2.

Murphy turned on the bats again in the bottom of the third, tying the game at 5 on a two-run homer by Royce Peterson that plated Joey Curry who had just smashed an RBI-triple to center field. The Bulldogs added two more in the following inning when Barolet tripled to lead off the inning before scoring on an RBI single by Jeremiah Clark. Clark came around to score after advancing to third on an error and coming home on another Viking error to make it 7-5.

Caleb Irwin went the distance on the mound for the Bulldogs, allowing five runs but only two of them earned with six strikeouts while scattering eight hits. Curry and Peterson were each 2 for 4 with a pair of RBI’s each in the game, powering the heart of the Bulldog order.