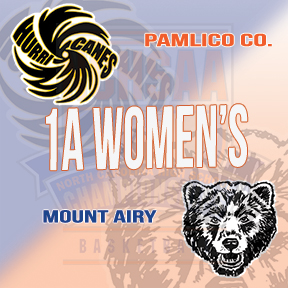 RALEIGH, N.C. – Mount Airy and Pamlico County faced off in the 1A Women’s Basketball State Championship Game for the second year in a row, and once again the Granite Bears came out firing on all cylinders on their way to a 69-32 victory and a second straight state championship.

Jo Snow put the Bears on her back early, scoring 13 of her team’s first 15 points as Mount Airy ran out to a 21-10 lead after the first quarter. Snow went on to score a game-high 27 points with four steals and a pair of assists as she was named the Kay Yow Most Valuable Player of the 1A Women’s Basketball Championship Game.

Mount Airy clamped down on the defensive end even tighter in the second half as the Granite Bears held Pamlico to just 11 points in the final 16 minutes. Shaunae Sawyers added nine points and grabbed a team-leading six rebounds on her way to being named the Granite Bears Most Outstanding Player.

Pamlico County never really got going offensively, as the Hurricanes turned the ball over 27 times in the game while forcing only 15 turnovers by Mount Airy. Jainaya Jones was named the Hurricanes Most Outstanding Player as she led the team with 17 points, playing the whole 32 minutes. The Hurricanes finished the season 26-2, as Eastern Regional Champions for the second year in a row.