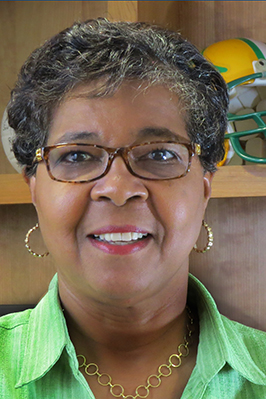 A native of Rockingham County, Tucker came to the Association in 1991 after a stint as an assistant coach for the North Carolina State University women’s basketball program. She worked under storied head coach Kay Yow.  Among her duties there was to oversee the team’s academic progress.

Before entering the collegiate ranks, Que was a highly successful coach at Reidsville Senior High School.  As a head women’s basketball coach at the high school level, she complied with a career win-loss mark of 145-104 from 1978 through 1988 and posted a 58-16 state as a volleyball head coach.

Tucker was an outstanding athlete at Stoneville High School in Rockingham County and went from there to Mars Hill College. She played basketball and graduated in 1974 with a B.S. degree in physical education.

She earned her master’s degree in physical education from the University of North Carolina at Greensboro in 1977, serving as a graduate assistant in women’s volleyball and basketball.  Her first teaching position was in the McDowell County system, where she taught and coached at West McDowell Junior High in Marion, NC. She finished her public school career teaching at Reidsville Junior High while serving as Varsity Volleyball and Basketball at Reidsville High School Schools.

She is a charter member of the Mars Hill College Athletic Hall of Fame and was an assistant basketball coach in the East-West all-star game conducted by the North Carolina Coaches Association in 1989.  She also has an excellent officiating background, serving as a game official in volleyball, basketball, and softball.

As Assistant Executive Director, Tucker developed the Association’s student services program, one of the unique offerings by a state association in the country.  The program dealt with substance abuse education, leadership development, academic accountability, and citizenship.  She helped organize the Student-Athlete Summer Institute (SASI) programs across the state.  To operate this program, she oversaw a budget of over $500,000, state monies from the NC General Assembly.