The #SportsmanshipTogether series follows examples of good sportsmanship and programs doing things the right way in an effort to highlight the positive things seen across the NCHSAA during the Association's "Sportsmanship ... Together we make the right call" campaign. If you see an example of excellent sportsmanship at an NCHSAA member school or event, please contact James Alverson of the NCHSAA with the details (james@nchsaa.org).

Shelby Golden Lions football is a big deal in Cleveland County. It should be, considering they’ve won four straight state championships. With success comes a lot of eyeballs, and the Golden Lions are drawing attention for a lot of very good reasons.

Through the “Football Buddies” program with Jefferson Elementary School, now in its third year, the Shelby football seniors make a positive impact on the children in their community. Each Friday, the seniors head over to Jefferson Elementary, where they are each assigned a classroom.

#SPORTSMANSHIPTOGETHER: NCHSAA TEAMS GIVE BACK OVER THE HOLIDAY SEASON WITH TOYS FOR TOTS CAMPAIGNS

Over the holiday season there are always a tremendous number of causes that draw people’s attention. Many NCHSAA teams looked for ways to give back to their communities throughout the season, and a few partnered with the United States Marine Corps Reserves’ annual “Toys for Tots” campaign.

Overhills and Southern Lee used their boys basketball game against each other to collect toys for the campaign while Cape Hatteras Baseball raffled off a Wal-Mart Gift Card to raise money and toys for the effort.

#SportsmanshipTogether: Injury brings two teams together in middle of a playoff game 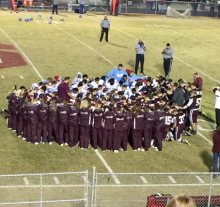 BRYSON CITY, N.C. - Playoff games are always intense. There is always an added edge when you know your season could end if you're on the losing side that night. Swain County hosted North Stanly in the 1AA Football Playoffs last Friday night and for one of the two teams, their season would come to an end.

It is not an uncommon sight to see teammates rally around each other during a very serious moment, but what was uncommon was the response of their opponents from North Stanly. Unprompted, North Stanly's coaching staff and players walked over to the far sideline and joined the Maroon Devils in kneeling and praying for their injured opponent.

JACKSONVILLE, N.C. – When Hurricane Matthew ravaged eastern North Carolina, it quickly became apparent that it would take a lot of cooperation from everyone in the affected communities and beyond to put life back together again. Many communities were hit hard, and West Craven High School was no different.

Many of the school’s students and families were displaced, forced into shelters by the rising floodwaters and daily school work, let alone high school athletics, quickly became an afterthought. In fact, at the time of this story, some two weeks after the hurricane hit, West Craven students have still not been able to get back to their school.

With West Craven cut-off by flooding and damage, White Oak is stepping up to help their conference rival. 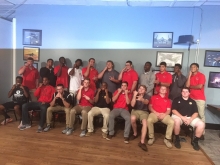 In the week leading up to such a heated rivalry game, Middle Creek Football Coach Randy Ragland and Fuquay-Varina Coach Jeb Hall thought it would be a good idea to bring leaders from each school's football program together for a #RespectTheRivalry dinner designed to promote good sportsmanship between the two schools. Many players grew up near each other, but several were meeting for the first time at the dinner. 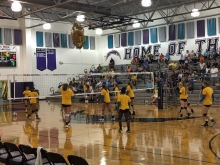 CONCORD, N.C. - Last Thursday's Volleyball match between Cox Mill and Hickory Ridge had the potential to be like any other match between two cross-county rivals, but thanks to the hard work of many student-athletes, coaches and the community, it was much more. For the match against Hickory Ridge, Cox Mill was putting on their second annual #BeBoldForGold charity match, raising awareness for Childhood Cancer Awareness month and raising money for the Prayers for Elijah Foundation.

#SportsmanshipTogether: A small act of kindness goes a long way in Rocky Mount

ROCKY MOUNT - We've all seen it, a player gets injured in a game. It is not a pretty part of the sports experience, but it was part of the reality of the JV men's soccer match between C.B. Aycock and Rocky Mount on Tuesday, September 13.

Sam Andrews from C.B. Aycock was injured trying to make a play in the Rocky Mount box, and laid behind the Gryphons goal. His injury drew the attention of Rocky Mount JV goalkeeper, Lucas Martinez. After the game, Martinez made it over to the C.B. Aycock sideline to check on the injured Andrews who had fractured his ankle in two places. It is not the injury itself that drew attention to the event, it was the simple act of concern and sportsmanship shown by Martinez that drew the attention of Andrews' mother, Betty Andrews. 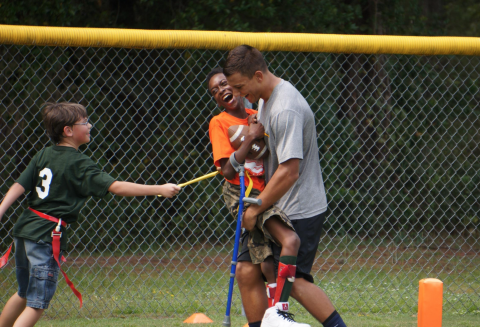 FAYETTEVILLE, NC - Friday night when Cape Fear and Terry Sanford clash on the football field, the Colts and the Bulldogs will be rivals, but on Saturday morning the two teams will join forces to help kick off the Fayetteville Cumberland Parks and Recreation (FCPR) "Buddy Flag Football" season.

Saturday is opening day for FCPR's 2016 Buddy Flag Football season which provides children with disabilities the chance to learn the basics of football, promotes skill development, cooperation and the making of new friends. The program utilizes the "buddy system" which pairs children with physical and mental disabilities with a buddy from a group of volunteers. All players get a buddy to help them throw, catch, run and make plays on the field.