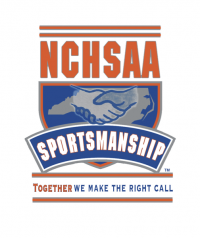 These pledges can be used during your preseason team meeting(s). A student-athlete and parent have to sign only one pledge per school year, but you can have your coaches sign as many as you believe necessary. Please remember that these are only samples, and you should feel free to write your own.

This award recognizes eight coaches who exemplify good sportsmanship and are positive role models for student-athletes. A coach’s colleagues may submit nominations. A recipient is then selected, one from each state’s eight regions, and will be recognized at the NCHSAA Annual Meeting in May with a plaque. This program is funded by North Carolina Farm Bureau Mutual Insurance Company.
Deadline April 1st

Heart of a Champion

Heart of a Champion recognizes student-athletes who have participated in at least one varsity sport and remained ejection-free during the school year. These students also exemplify outstanding citizenship and sportsmanship. The recognition ceremony is a luncheon in April, sponsored by the NCHSAA Student Services Division and North Carolina Farm Bureau Mutual Insurance Company.
Deadline: March 1st

Recognizes student-athletes who participated on an ejection-free team throughout the season. Each member of the ejection-free team will receive a certificate upon request by the coach. The coach can also submit three student-athletes names who went the "extra mile" to be good citizens and role models. In addition to a certificate, these students will also receive a sportsmanship t-shirt. This program is funded by North Carolina Farm Bureau Mutual Insurance Company.

This program is currently under reconstruction and temporarily unavailable!  Check back later for details!

Spirit of Sport Award (Nomination form will be posted soon)

Sponsored by the National Federation of State High School Associations, this award was established to recognize those individuals who exemplify the ideals of the positive spirit of sport that represents the core mission of education-based athletics. It is given in recognition of a specific act or an activity of a longer duration. Nominees can be a coach, athletic administrator, official, trainer, student-athlete, or others associated with the school’s athletic program.

The goal of the NCHSAA is to solicit nominations from the membership and select a state winner. The recipient will be recognized at the Annual Meeting in May, and his or her application will be submitted to the NFHS for the national award. All nominees will receive a certificate of recognition.
Deadline January 4, 2021