CHAPEL HILL— The North Carolina High School Athletic Association (NCHSAA) is pleased to announce the 2022 recipients of the Charlie Adams Endowed Scholarship, an award honoring the late and former executive director of the NCHSAA. For the first time in the award’s history, four student athletes will be honored with scholarships. Connor Goodman from Jay M. Robinson High School and Luke Hegler from East Rowan High School are this year’s male recipients. The female recipients are Briley Bickerstaff from Riverside-Martin High School and Rachel Bowers from Research Triangle High School. All four student-athletes will receive the $1,500 scholarship award.

About the Scholarship Winners 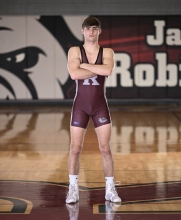 Connor Goodman, a senior at Jay M. Robinson High School, is a four-year member of the varsity wrestling team, and played one year on the JV football team. As Connor began his wrestling career, he was named Jay M. Robinson Rookie of the Year and Jay M. Robinson Most Outstanding Wrestler (an honor he received three of his four high school years). He wrapped up his high school year as Team Captain and earned his 150th High School Career Win. While concentrating on his wrestling, Connor found time to be a part of the Creative Ministries group at his church, taking a mission trip to Alaska in the summer of 2021. Connor plans to continue his wrestling career at Queens University where he will study graphic design.

A thought from Conner – “You will always come out better in sports and life by staying humble and trying to be the bigger person, putting others ahead of yourself. Sometimes it is hard, but it is the right thing to do.” 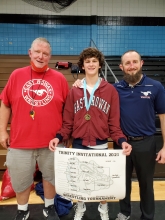 Luke Heglar, a senior at East Rowan High School, is a four-year member of the varsity wrestling team, and participated in track and field for one year. During his sophomore year, Luke was named East Rowan Most Improved Wrestler and by his senior year, was voted Most Outstanding Wrestler in the Rowan County Championship Tournament. He earned his 100th High School Career Win during his final year of high school. Luke was a member of several school and community clubs, being inducted into the East Rowan Honors Society in his junior year and was nominated for the National Society of Leadership and Success as a senior. Maintaining a 3.97 unweighted GPA, Luke was active in his church as leader of the youth group and volunteering on several community projects, working in the Meals on Wheels warehouse one summer. Luke hopes to major in Actuarial Science at either North Carolina State University or High Point University.

A thought from Luke – “My grandfather has always told me that ‘integrity is always doing what is right, even when no one is watching.’”

Briley Bickerstaff, a senior at Riverside High School in Martin County, is a four-year member of the varsity cross country and track and field teams, where she served as captain of the cross country team and was the MVP all four years.  All her hard work paid off as Briley was the 1-A Cross Country State Runner-up in her junior and senior years and the 1-A State Champion in the 1600-meter and 3200-meter runs. In addition to her focus on running, she maintained a 3.85 unweighted GPA and was named to the Academic All-Conference team each of her four high school years. In Briley’s sophomore year, she was inducted into the National Honor Society. Briley maintained membership in the Fellowship of Christian Athletes, Interact/Key Club, Phi Theta Kappa Society, and the Alpha Beta Gamma society. To give back to her community, she volunteered with Toys for Tots, Operation Christmas Child, Blessings in a Backpack, and Special Olympics. Briley’s desire to become a Registered Dietitian will be realized at North Carolina State University.

A thought from Briley – “Leadership requires courage. When you lead with courage it is contagious.”

Rachel Bowers, a senior at Research Triangle High School, is a four-year member of the cross country team, a three-year member of the track and field team, and participated on the golf team as a junior and on the swimming and diving team as a senior. She has 2 State Championship gold medals, one as a member of the 1-A Cross Country Championship team, in her sophomore year: and the other one for the 4x800 relay as a junior. She was named her high school’s Student-Athlete of the Year twice. Rachel was inducted into the National Honor Society and the National English Honor Society during her sophomore year. In addition to her involvement in outside activities and community projects, Rachel was selected to be a member of the NCHSAA Student-Athlete Advisory Council where she organized a community service project to collect children’s books for the Wake County Guardian ad Litem, providing books to foster children.  Rachel plans to pursue civil and environmental engineering at Mississippi State University, University of Tennessee, or University of North Carolina-Chapel Hill.

A thought from Rachel – “. . . with the hope that one day I can help others make the world more sustainable, one step at a time.”

About the Charlie Adams Endowed Scholarship

The Charlie Adams Endowed Scholarship was created in honor of Charlie Adams, former executive director of the NCHSAA, for his more than 40 years of dedication to helping the boys and girls of North Carolina by offering opportunities to participate in athletics. Adams led the Association through huge transitions and great expansions during his tenure as Executive Director from 1984 until he retired in 2010. He was the fifth Executive Director in the history of the Association. Prior to becoming executive director, Adams served as assistant executive director and supervisor of officials for the Association for some 17 years. He passed away in 2017 at the age of 81.

The female award is given in honor of his daughter, Michelle Adams Szwajkun, who participated at Chapel Hill High School on the cross-country team, including a spot on the 1984 state championship team. The male award is given in memory of Charlie Adams’ son, C. Scott Adams, who wrestled at Chapel Hill High and was the first Tiger to compete in the state wrestling championships, finishing fourth overall.