The tournament consists of a two-round stroke play format and crowned an individual champion and a team champion in each of the four classifications. Recaps and links to results are included below. 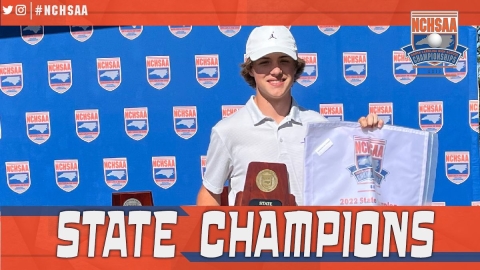 Mitchell Mountaineer sophomore Connor Warren dominated the final day of competition at the 1A Men’s Golf State Championship, carding the only under-par round of the tournament on day two. Warren backed up his +4, 76, on Monday with a nearly flawless 2-under, 70 on Tuesday to cruise to an Individual State Championship, besting Eastern Randolph’s Connor Carter by eight strokes.

Warren played to perfection on the front nine, going out in 32 with three birdies and six pars. The flawless front nine gave him plenty of cushion for the back nine, as overnight leader Colin Ferrick from Christ the King, and the two players Warren spent the night tied with at +4, Carter and Cameron Lutterloh, all had rough patches in their respective rounds.

Ferrick fell back early with a +6 stretch on holes 2 through 4 on his way to a 41 on the front nine. Lutterloh struggled out of the gate with a double on the opening hole followed by a bogey on the second. He then doubled the par 5 5th Hole on his way to a front-nine 39. Carter held things together for the longest of the individual leaders. He managed to make the turn in 1-under 34 thanks to two birdies and a single bogey on the opening side. However, on the closing nine, Carter struggled mightily, carding five bogeys and a double against just one birdie on his way to a 44 and final round score of 78. 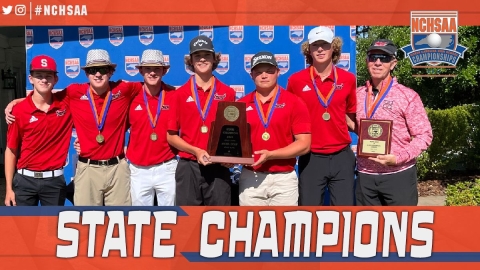 South Stanly led by three shots over Mitchell overnight, and the Bulls managed to hang on to that lead, giving up just one stroke to the charging Mountaineers on the final day of competition. Once again, all four scoring players for South Stanly broke 90, led on day two by Dustin Hurley who carded an 82 (+10). Luke Webb was just a few shots in back of his teammate at 85 with Davis Wright posting a day two 86 and Luke Dennis coming up with an 89 to round out the Bulls scoring foursome on the final day.  The title was the first State Championship in program history for South Stanly, which qualified for the team competition for the first time since 1996.

The NCHSAA is committed to recognizing and promoting outstanding sportsmanship and has partnered with the NC Farm Bureau to recognize two individuals at each State Championship who have demonstrated these ideals throughout the 2022 season. The 1A Men’s Golf Championship Sportsmanship Award Winners for this year were Brody Miller from Mitchell and Jacob Turner from South Stanly. 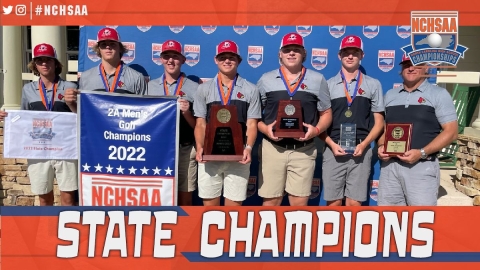 After sharing the lead overnight, East Surry bested Midway’s foursome on the final day of the 2A State Championship to win the Cardinals’ seventh team state championship and their first since 2008. The Cardinals were led again by Bradley Davis, Jr. who entered the day at 75 (+3) just one shot in back of the overnight leader, Drew O’Neal from Beddingfield.

Davis matched his +3 round from the first day on the final day to put up a superb 6+ total for the tournament, but Midway’s Logan Atkins posted the only even-par round of the tournament in the Final Round to pair with his opening round 76 (+4) to win by two shots over his counterpart from East Surry. Atkins win makes him the second player to win an Individual State Championship from Midway, joining Logan Patrick, a two-time individual champion, as the only other Midway player to earn that distinction. 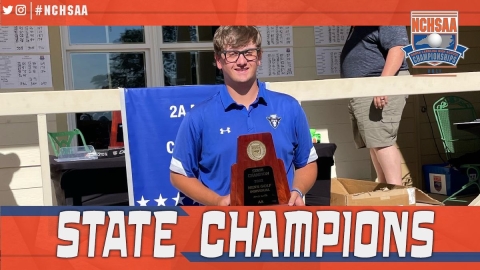 Atkins went out in 35 on the opening nine, draining two birdies and carding just a single bogey on the front nine. After an opening bogey on the par 4 10th Hole, he steadied the ship and knocked in pars all the way home to post an even-par 72 and take the tournament.

East Surry also got outstanding rounds from the rest of their scoring foursome to solidify the victory on the final day of the event. Chase Harris shot 78 (+6) thanks to a pair of matching 39’s on the front and back nine. Connor Key and Anderson Badgett contributed an 86 and an 87, respectively.

The NCHSAA is committed to recognizing and promoting outstanding sportsmanship and has partnered with the NC Farm Bureau to recognize two individuals at each State Championship who have demonstrated these ideals throughout the 2022 season. The 2A Men’s Golf Championship Sportsmanship Award Winners for this year were Caden Hodges from Midway and Jordan Davis from East Surry. 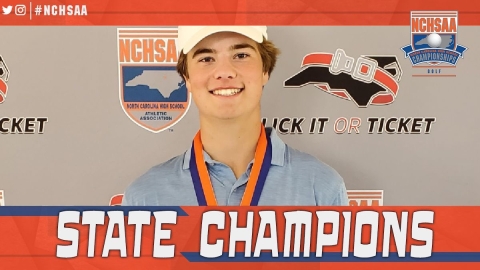 J.H. Rose swept the team and individual honors at the 3A Championship, but the Individual Championship needed two sudden-death holes to decide the winner. Four players tied for the top spot at +5 for the tournament, including the overnight leader Nick Norman from Forestview. The senior was joined by fellow senior Davis DeLille from High Point Central, junior Gavin Drose from Cape Fear, and sophomore Luke Mosely from J.H. Rose. 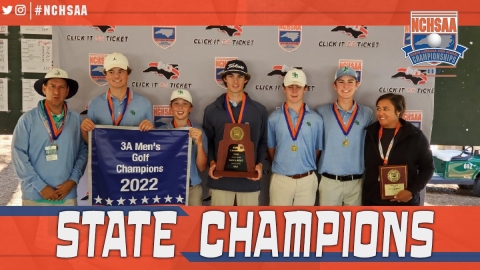 Rose bested Terry Sanford by 17 shots, posting a +40 total of 616. Mosely was aided by Cameron Hardison who bounced back from a day one round of +7, 79, to be one of two golfers in the field to go under par in a round. Hardison posted a 1-under, 71 on the final day of the tournament to finish in a tie for fifth with Terry Sanford’s Thomas Horne. The lone other player to go under par for an 18-hole total was Gavin Drose, who carded a 1-under, 71, on Tuesday to lift himself into the championship tiebreaker.

The NCHSAA is committed to recognizing and promoting outstanding sportsmanship and has partnered with the NC Farm Bureau to recognize two individuals at each State Championship who have demonstrated these ideals throughout the 2022 season. The 3A Men’s Golf Championship Sportsmanship Award Winners for this year were Parks Helms from Terry Sanford and Cameron Hardison from J.H. Rose. 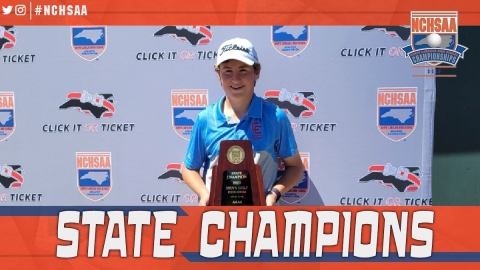 Hartman carded four birdies in the round, including a pair of birdies back-to-back on the par 5 2nd and the par 4 3rd Holes. He went out in a blistering 35, coming home at even par on the back nine with a pair of birdies to match a pair of bogeys. After matching Hartman shot for shot on Monday, Marvin Ridge’s Jack Wieler faded a bit on day two. Weiler could not get things going on the front nine after his first birdie of the day on the par 4 3rd. He bogeyed the 5th and 6th holes to post a 1-over, 37 on the front nine. He struggled to a 39 on the back nine, carding four bogeys against just a single birdie, as he saw Hartman slip away down the stretch. Leesville Road’s Simon Burgos finished third, at 5-over, 149 for the tournament, posting very respectable +2 and +3 rounds, respectively. 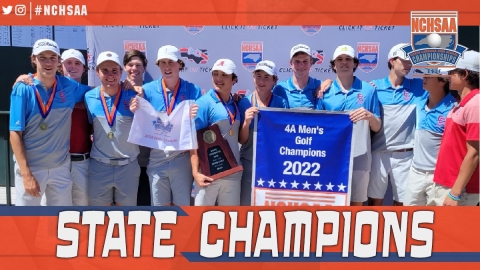 The Cougars also got a strong performance from Steven Shea as the junior finished in a three-way tie for fourth at +7 for the tournament. Shea was just one shot off the co-leaders overnight but struggled in the opening 11 Holes of Day 2, posting a +6 through the first section of the day. Tyler Doresy and Will Guthrie rounded out the Cougars’ scoring quartet in the second round, carding rounds of +11, 83.

The NCHSAA is committed to recognizing and promoting outstanding sportsmanship and has partnered with the NC Farm Bureau to recognize two individuals at each State Championship who have demonstrated these ideals throughout the 2022 season. The 4A Men’s Golf Championship Sportsmanship Award Winners for this year were Will Mitchell from Green Hope and Jason Vargosko from Charlotte Catholic.