During the month of February, in honor of Black History Month, the NCHSAA website will feature information about African Americans who have made major contributions to the great tradition of high school sports in our state. We hope you find these both entertaining and informative. Our thanks to Rick Strunk, former NCHSAA Associate Commissioner, on his research into many of these articles and Championships 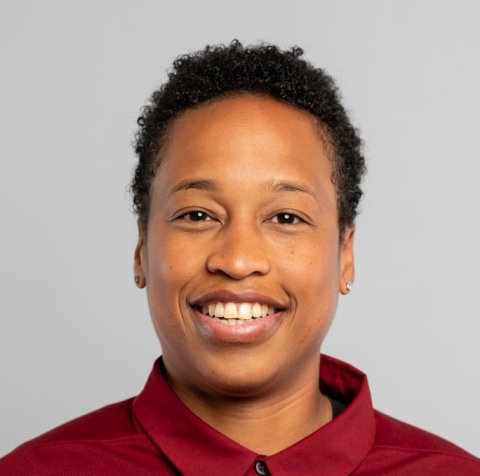 A four-sport star for her high school, King participated in volleyball, basketball, softball and track. She played four years for NCHSAA Hall of Fame head coach Woody Wall at Rockingham County High School and helped the team to the 2001 State Championship Game. She was named the team’s Most Valuable Player and earned all-region and all-conference honors. King was selected and played in the 2001 East-West All-Star game for North Carolina Coaches Association and graduated with the school record for three-pointers in a career and season. In softball, she graduated with the school record for most doubles in a game.

At Guilford College, she was a two-sport athlete, participating in basketball and softball, starting for both teams. She earned honorable mention all-conference honors in 2002-2003 for basketball, ranking tenth in the ODAC in scoring and assists.

King worked as an assistant basketball coach at Greensboro College from 2006-2016, helping the program to five regular-season championships and two conference tournament wins. In 2016, she was hired as the head coach of Johnson & Wales University, a program that had been in existence for just two years, winning seven games the season prior to her hiring. In just two years, King led the program to a USCAA Division II National Championship, posting a 37-10 record in her two seasons as head coach.

In 2018, the NFL hosted the NFL’s Women’s Forum, and King was one of 40 women to attend the program. There she met Ron Rivera, then Carolina Panthers Head Coach, and was hired as an intern by the Panthers later that year, working with their wide receivers. After a full-time stint with the Alliance of American Football (AAF) Arizona Hotshots, she returned to the Panthers staff as an intern, working with the running backs, before a stint at Dartmouth in 2019 and the Washington Football Team, again with Rivera, in 2020.