CARY, NC – The North Carolina High School Athletic Association (NCHSAA) 3A State Championship meet was dominated by the Carrboro Jaguars on both the men’s and women’s side of the meet. The Jaguars men’s and women’s 200 Medley Relay teams led off the finals with victories and they never looked back on their way to claiming the men’s sixth team title and the women’s fourth straight championship. 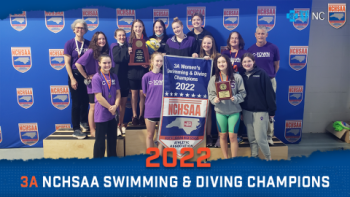 Carrboro women blasted past runner up J.H. Rose 306-233. The Jags swept the three relay events to stretch out a comfortable lead in the team standings. Kate Hegland, Lindy Bilden, May Lambert, and Grace Macklin dominated the 200 Medley Relay with a time of 1:50.60. In the 200 Free Relay Hegland, Emily Carpenter, Avery Shuping, and Bilden combined to post the winning time of 1:36.52. The Jags relays closed out the meet with a victory over J.H. Rose in the 400 Free Relay as Hegland, Lambert, Shuping, and Carpenter outraced the Rampants with a time of 3:33.39.

Two Jaguar racers collected wins in individual events at Bilden stood atop the podium in the 100 Butterfly thanks to her time of 54.58 seconds and her teammate Carpenter grabbed the gold in the 100 Backstroke with a time of 54.97 seconds.

J.H. Rose rolled to a second-place finish in the team standings thanks in large part to the efforts of Madeline Smith. The Rampants’ swimmer collected victory in a pair of individual events, bringing home the title in the 200 Freestyle with a time of 1:48.45, just in front of her teammate Emma Hastings who touched in 1:49.07. Smith also snatched victory in the 100 Freestyle, sprinting to a time of 50.18 seconds and the 3A Most Outstanding Swimmer Award.

Hastings was also impressive for the Rampants. She won the longest event of the meet, the 500 Freestyle, with a new 3A State Meet Record time of 4:48.78, the lone State Meet Record to go down in the 2022 State Meet. The other two-event winner was Maddie Geyer from Parkwood who collected gold in the 200 Individual Medley with a time of 2:03.81 and in the 100 Breaststroke in 1:04.72. 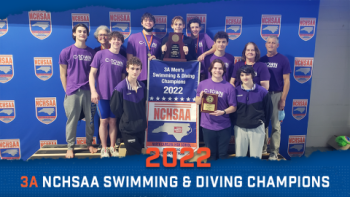 The men’s meet was a little closer as Carrboro held off Northwest Cabarrus 218-183 to win the Jags second straight team state title after winning last year’s 1A/2A meet. Will Thompson led the way for the Jags, picking up wins in the 100 Freestyle and 100 Backstroke. The sophomore blitzed the field in the 100 Back, touching in 49.30 seconds and over four seconds ahead of second place Davis Adcock from South Point. Thompson was challenged a little more in the 100 Free as he tapped the wall in 46.30 seconds ahead of Northwest Cabarrus’ Lane Bradshaw who touched in 47.53.

Lucca Battaglini from Durham School of the Arts won a pair of individual events on his way to being named the 3A Most Outstanding Swimmer for the meet. Battaglini collected wins in the 50 Free and 100 Butterfly. He touched in 20.05 seconds in the 50 Free, a full second ahead of second place Briggs Cloutier from West Carteret. Battaglini also was victorious in the 100 Butterfly with a time of 47.35 seconds, outracing Harrison Ranier from Northwest Cabarrus for the win.

The lone other swimmer to pull in multiple individual victories was Concord’s Matthew Lucky. Lucky was victorious in the 200 Individual Medley with his time of 1:49.06. He also collected a gold medal in the 100 Breaststroke with a time of 55.91 seconds.