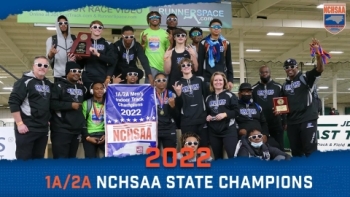 The Mountain Island Charter men outran Cummings by a final of 57-49 in the team competition. The Raptors were led by Trevin Moyer who set new 1A/2A State Meet Records in the 55 Meter Dash and the 500 Meters. Moyer sprinted to the line in 6.25 seconds in the 55 Meter Dash, besting Cummings’ Jonathan Paylor who crossed second in 6.46. Moyer’s 55 Meter time eclipsed the 1A/2A Meet Record of 6.33 seconds set by Juwan Crowder from Forest Hills in 2015. Moyer also knocked down the 500 Meter record, completing the run in 1:05.31 on his way to being selected as the 1A/2A Men’s Most Outstanding Performer.

There was one other 1A/2A State Meet Record to fall by the wayside on the men’s side. The Pole Vault record of 14’ 10” set by Jake Justice in 2019 went down not once, but twice. Matthew Gray from Swain County went over the bar at 15’ 00”, which any other year would have won the 1A/2A Indoor Pole Vault event. However, East Burke’s Kenneth Byrd soared over the bar at 16’ 00” and came crashing to the mat the 1A/2A Pole Vault State Champion and new 1A/2A Stat Meet record-holder. Byrd also won the High Jump with a clearance of 6’ 04”. 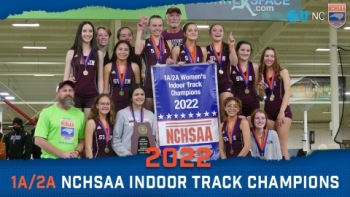 The Women’s meet was as close as they come, as Swain County held off a tough challenge from Community School of Davidson 42-41. The Maroon Devils won the team competition despite not collecting an individual state championship in the meet. The Swain County runners were led by Arizona Blankenship who finished second in the 1600 Meter Run with a time of 5:21.25. She was bested by Briley Bickerstaff from Riverside-Martin who finished in 5:20.77. Blankenship also finished third in the 3200 Meter Run posting a time of 11:35.92 and clocking in behind the champion, Bickerstaff (11:12.51), and Madison Clay from Patton (11:13.14).

The Swain County 3200 Meter Relay team finished third with a time of 10:34.68 behind Community School of Davidson and Polk County. They also place two finishers in the top five of the Pole Vault event as Laiken Harvey finished fifth and Amelia Rogers brought home silver by clearing 9’ 06”, just a foot less than Wilkes Central’s Abigail Tully who won the event.

Cummings star Tamesia Pinnix was the 1A/2A Meet Most Outstanding Performer, racing to victory in the 55 Meter Hurdles in 8.15 seconds. She also won the Triple Jump with a jump of 37’ 5.00”