CARY, NC – The North Carolina High School Athletic Association (NCHSAA) 4A State Championship meet was a highlight reel from start to finish. Myers Park women brought home the program’s first state championship since 1976, edging Green Hope 264-216 on the strength of the team’s depth. On the men’s side, Green Hope nipped Myers Park 202-201, winning the final event, the 400 Yard Freestyle Relay in a new state meet record time to climb to the top of the team standings and earn the Falcon men their fifth straight team state championship. 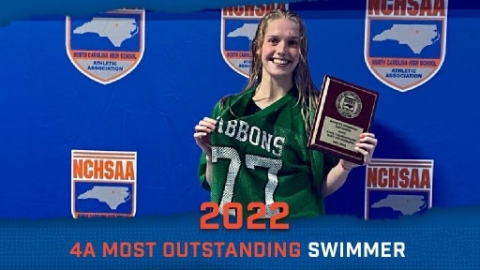 There were many highlight worthy individual performances in the meet, but none stood out as much as Cardinal Gibbons senior Claire Curzan’s final high school meet. After bringing home Olympic Silver from Tokyo in 2021, Curzan finished her high school career with an emphatic flourish.

Her split time on the anchor leg was 46.76 seconds for the 100-yard distance, nearly four seconds faster than the next fastest split in the heat. Curzan’s stellar night earned her the Most Outstanding Swimmer Award for the 4A Women’s Meet and powered Cardinal Gibbons to an eighth-place finish in the Women’s team standings. 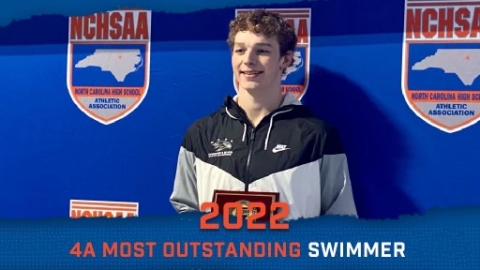 On the men’s side, Michael Cotter from Green Hope was the dominant force. Cotter won a pair of events individually, ascending the podium in the 200 Free and the 500 Free. Cotter set a new all-Classification State Meet Record in the 200 Free with his time of 1:35.01, eclipsing the time of 1:35.34 set by Myers Park’s Jack Walker in 2019. He cruised to victory in the 500 Free with a time of 4:21.14, more than nine seconds in front of second place Matthew Marsteiner from Leesville Road.

Cotter also anchored the victorious 400 Free Relay team for the Falcons, helping bring home the team title with their victory and new all-Classification State Meet Record in the event. The Falcons quartet of Landon Lloyd, Colin Whelehan, Brian Farrell, and Cotter combined to post 3:04.31 taking down the record time of 3:04.91 set by J.H. Rose in the 2014 state meet. Cotter collected the honors for Most Outstanding Swimmer in the 4A Men’s Meet. 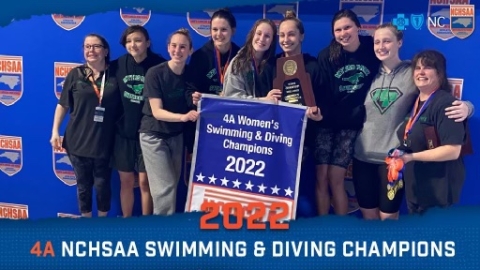 The women’s team competition was all about depth as Myers Park only won a pair of events. The Mustang ladies captured first in the 200 Medley Relay as Kayman Neal, Sofia Plaza, Kiley Wilhelm and Maya Gendzel swam to victory in 1:42.86.

Wilhelm grabbed the lone individual event title for the Mustangs, setting a new all-Classification State Meet record in the 200 Individual Medley with her time of 1:55.79. Wilhelm’s victory trimmed the time of 1:56.71 set by Apex Friendship’s Brooke Zettel in 2021. The junior swimmer, Wilhelm, also finished second in the 100 Backstroke with a time of 52.64 seconds while teammate Neal placed fifth in the event in 55.71 seconds.

Plaza finished third for Myers Park in the 200 IM, checking in just behind Grace Rainey from Hough. Another Mustang found their way into the championship heat of the 200 IM as Grace Tuchi placed eighth in 2:06.45 after swimming 2:05.02 to qualify for the championship heat in prelims. Neal medaled for the Mustangs in the 100 Butterfly, placing fourth in a time of 55.12 seconds.

Of note, the 4A State Meet Record time in the 100 Breaststroke was trimmed by Grace Rainey from Hough. Rainey touched the wall in 1:00.97 just slightly ahead of her own mark of 1:01.05 from a year ago in the state meet. 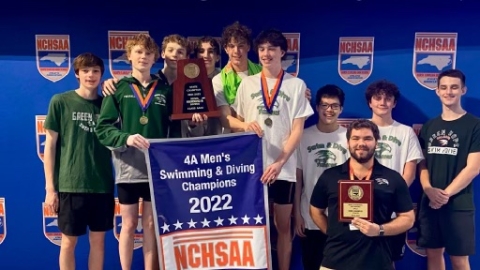 A single point separated Myers Park and Green Hope in the men’s team standings, Green Hope getting the edge thanks to the final event relay win in the 400 Free Relay. Myers Park swimmers brought home the meet’s opening relay, the 200 Medley Relay, with a time of 1:33.10 behind the strong performance of Spencer Freeman, Jack Guenther, William Berkeley, and Graham Hohnbaum. They out-touched Green Hope’s quartet by 0.29 seconds to get the win.

The two teams were always neck and neck in the meet, with Green Hope’s Cotter outracing Myers Park’s Spencer Freeman to the wall in the 200 Freestyle. The Falcons Whelehan also nipped the Mustang’s Guenther for third in the 200 IM. Whelehan also placed second in the 100 Butterfly, knocking down a time of 49.24 seconds and coming in behind Wake Forest’s Tate Bacon who finished in 47.13 seconds.

Landon Lloyd gave the Falcons another podium in the 100 Freestyle, swimming a time of 45.70 seconds to finish in third behind David Greeley from Cardinal Gibbons and Tiesyn Harris from Butler who finished in 45.10 and 45.38 seconds, respectively.

The Myers Park team of Joseph Clark, Bryan Bucci, William Berkeley, and Graham Hohnbaum finished third in the 200 Free Relay, posting a time of 1:25.70 and touching behind champions Cardinal Gibbons (1:24.92) and West Forsyth (1:25.67). The Green Hope relay squad finished fifth in the event with a time of 1:26.28 and that set up the final showdown in the 400 Free Relay to close the night. 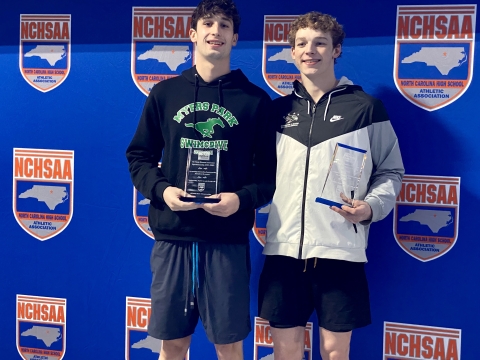 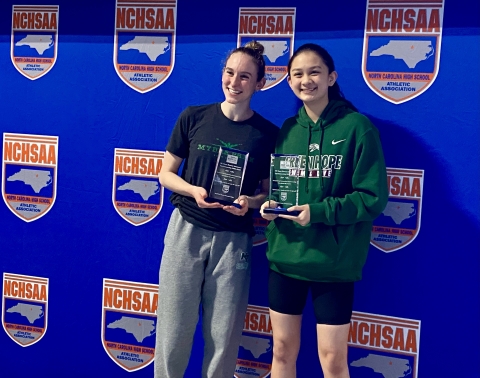