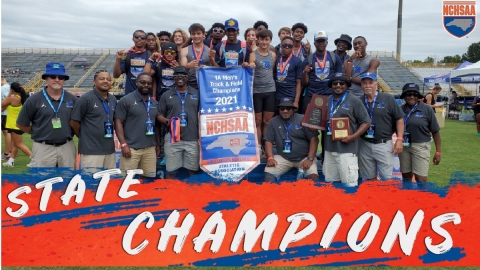 Mountain Island runners dominated the 1A Men’s meet. The Raptors collected individual championships in the 100 Meter Dash, 200 Meters, 400 Meters, the 4 X 100 Relay, and the 4 X 200 Relay. Armonte Ferguson broke the tape just in front of his teammate with a time of 10.96 seconds in the 100 Meter Dash. Trae Nickleson got his own individual title with a time of 22.41 seconds in the 200 Meters, while Raptor teammate Giovanni Bernard brought home the 400 Meters in 50.65 seconds.

The Raptors claimed victory in the two shortest relays as well. Nickelson and Ferguson teamed up with Jonavon Fisher and Reginald Taylor to blast their way to the 4 X 100 Meter Relay Championship in 44.05 seconds. Nickelson, Fisher and Taylor got an assist from Caleb Patton to close the title run in the 4 X 200 Meter Relay in 1:31.50. The two relay wins and dominating performances in the sprint events helped the Raptors outscore second place Pine Lake Prep 91.5 to 54 in the final team standings. 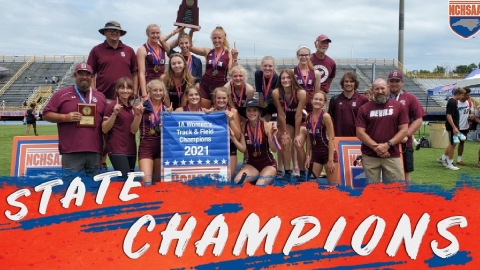 In the Women’s meet, the team championship was much more closely contested as Swain County only outscored Pamlico 78-52. The Maroon Devils and Pamlico participants each claimed three individual State Championships, but Swain’s depth in the field events and hurdles helped push them to the team title.

The 1A Women’s Most Valuable Performer award went to Highland Tech’s Lauren Tolbert who claimed a pair of individual State Championships. Tolbert raced to the 400 Meter Run victory in 56.81 seconds and sprinted to a time of 2:22.86 in her championship 800 Meter Run. Tolbert also finished second in the 100 Meter Dash and third in the 200 Meters.

Tra’Nijah Pettihomme won the 100 Meter Dash and 200 Meter Dash for Pamlico, crossing in 12.32 seconds and 25.48 seconds for her victories. She also anchored the Hurricanes victorious 4 X 100 Meter Relay squad, combining with Timia Smith, Carrigan LeMaster and Kierra Tutt to cross in 50.75 seconds.

The NCHSAA promotes good sportsmanship by student-athletes, coaches, and spectators across our state. To highlight our commitment to sportsmanship, the NCHSAA has partnered with NC Farm Bureau to honor two athletes at each NCHSAA State Championship event who have demonstrated outstanding sportsmanship throughout the season with the NC Farm Bureau Sportsmanship Awards. The 2021 1A Women’s Track & Field Sportsmanship Award Winners were Jenna Marr from Swain County and Mirachell Maher from Pamlico County. The 1A Men’s winners were Trae Nicholson from Mountain Island Charter and Lukas Valley from Pine Lake Prep.