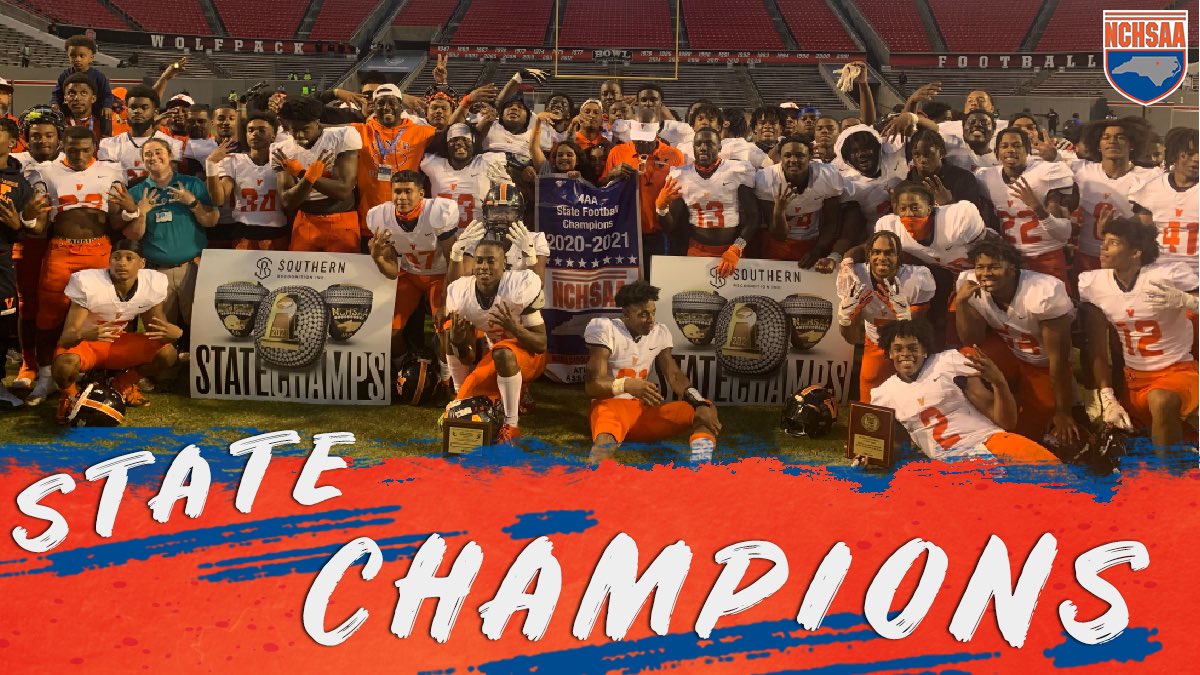 RALEIGH, NC –  The Vance Cougars knocked out Rolesville 35-14 to win their second straight State Championship. Austin Grier threw for 200 yards and three touchdowns to lead the Cougars and grab the game’s Most Valuable Player honors.

Grier sealed his MVP award with a pair of third-quarter touchdown passes, both to Asuani Allen to push the Vance lead out to 35-14 with 3:03 to go in the third quarter before the Vance offense watched their crushing defense bring things home in the fourth.

The Vance offense was simply prolific, rushing for 331 yards and two scores in the game, as the Cougars racked up 531 yards of total offense in the win. Meanwhile, the Cougar defense was miserly, holding the Rams to just 67 yards of total offense in the game. The Cougars were led defensively by Jalen Swindell who had six tackles, including a sack and 2.5 tackles for a loss on his way to Most Outstanding Defensive Player honors.

Grier got started on his day early, hitting Armon Wright for a 59-yard score just two minutes into the game to go up 7-0. Rolesville answered the early bell, punching back with a touchdown of their own on a 13-yard pass from Byrum Brown to Noah Rogers to tie the game with 6:12 to go in the opening quarter. Rogers collected Most Outstanding Offensive Player recognition for Rolesville, picking up five receptions and 69 yards to go with his two scores.

Vance jumped back in front in the second when Kevin Conception grabbed a pass from Grier and went 14 yards to the house. The Cougars point after attempt was blocked and Vance held a 13-7 lead. Rolesville took the lead just under two minutes later when Rogers hauled in a six-yard touchdown pass from Brown, converting the point after to take their only lead of the game at 14-13 with 6:33 to go in the first half.

Just before halftime, the Cougars snatched the lead back when Dylan Smothers dashed nine yards to paydirt to cap a 12 play, 80-yard drive that ended with just 1:38 to go in the half. Smothers ran for 97 yards on just 12 carries, bringing home Most Outstanding Offensive Performer hardware.

Though they drew a very difficult assignment, trying to contain the Vance skill players, the Rolesville defense performed well, particularly in the first half. Jacorrey Bible finished the night with a game-high 17 tackles, including four tackles for loss. He was named the Most Outstanding Defensive Player for the Rams.

Vance wrapped up the season 9-1. The Cougars were 6-1 in I-Meck 4A play. Vance secured the program’s third straight Regional Title, appearing in the State Championship Game for the third year in a row.

Rolesville finished the season 9-0. The Rams were 35-0 in Northern 4A play. They won the program’s first conference championship, first regional title, and appeared in the State Championship Game for the first time in school history.

The NCHSAA is committed to recognizing and promoting good sportsmanship and has partnered with the NC Farm Bureau to highlight individuals from each State Championship event who exemplify the ideals of outstanding sportsmanship. The 2020-2021 4AA Sportsmanship Award recipients were Jalen Butts from Rolesville and Zarion Jackson-Bass from Vance.