CARY, NC – The North Carolina High School Athletic Association (NCHSAA) 4A State Swimming & Diving State Championships saw seven all classification or 4A state meet records go by the wayside as two familiar teams took the top of the podium at the end of the night. The Green Hope men’s team claimed their fourth straight team title as the Hough women won the program’s sixth team championship.

The format of this year’s State Swimming & Diving Championships included timed finals, rather than the traditional prelims feeding a consolation and championship heats. The number of entries was also reduced from 24 per event to 12. Team points were awarded for the top eight times, down from the usual 16 scoring positions. 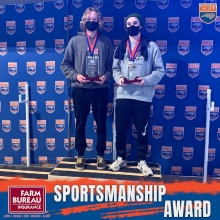 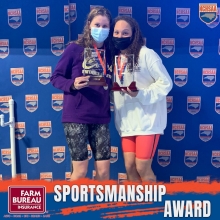 The NCHSAA is committed to recognizing and promoting good sportsmanship and has partnered with the NC Farm Bureau to highlight individuals from each State Championship event who exemplify the ideals of outstanding sportsmanship. The 2021 4A Sportsmanship Award recipients were Amaya Hanley from Hough, Olivia Gschwind from Broughton, Jackson Pollard from Green Hope, and Sam Howard from South Mecklenburg.

Hough dominated the meet in team scoring. The Huskies won the meet’s opening relay, the 200 Medley Relay, in a time of 1:42.98 as Amaya Hanley, Grace Rainey, Elizabeth Sowards and Kyra Tonsil worked to a victory. Morgan Razewski followed that race up with a victory for Hough in the 200 Freestyle for Hough, swimming the four laps in 1:46.74. Hough’s Grace Rainey established a new 4A state meet record in 100 Breaststroke swimming 1:01.05 which bettered her own time of 1:01.26 in 2020. The other individual event winner for Hough was Andra Buchan in the 1-Meter Diving event. Buchan scored 433.35 in her 11 dives.

Other notable swims in the meet included Cardinal Gibbons’ Claire Curzan who tied her own all-classification state meet record in the 100 Butterfly, posting a time of 50.35 seconds and matching her personal mark that is still the fastest time ever recorded in the National Federation of State High School Associations (NFHS) National Record Book. Curzan also won the 100 Backstroke, posting a time of 51.67 seconds.

Brooke Zettle from Apex Friendship set a new all-classification state meet record in the 200 Individual Medley. Zettle touched in 1:56.71, nipping the previous record of 1:56.77 set by Kylie Wilhelm from Myers Park in 2020. 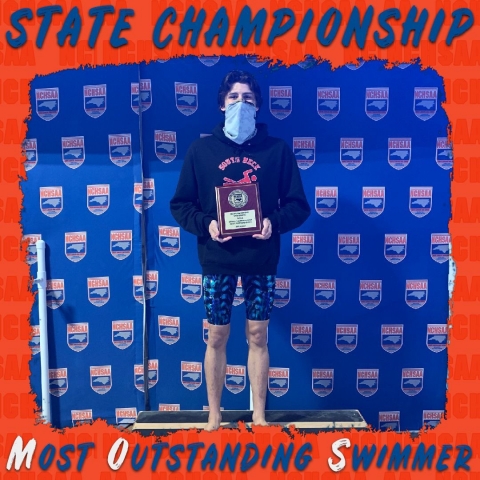 Garrett Boone from South Mecklenburg won a pair of individual events, establishing new 4A state meet records in each event on his way to 4A Most Outstanding Swimmer honors. Boone won the 50 Freestyle in 20.32 seconds, sliding in just ahead of the previous record of 20.33 seconds set by Reagan’s Max Edwards in 2019. Boone also set a new 4A state meet record in the 100 Backstroke, winning the event in 48.28 seconds and eclipsing the previous record of 48.44 seconds set by David Wahlen from Athens Drive in 2019.

Green Hope was dominant in the men’s team competition, winning a pair of relay events and picking up a pair of individual event wins by Michael Cotter. Cotter won the 200 Freestyle in 1:36.49 before going on to victory in the 500 Freestyle with a time of 4:26.59. Cotter teamed with Landon Lloyd, Jackson Pollard, and Ben Prucha to win the meet’s opening event, the 200 Medley Relay, with a winning time of 1:33.58. Then Cotter anchored the victorious 400 Freestyle Relay, combining with Pollard, Prucha and Colin Whelehan to swim a time of 3:05.30.