The format of this year’s State Swimming & Diving Championships included timed finals, rather than the traditional prelims feeding a consolation and championship heats. The number of entries was also reduced from 24 per event to 12. Team points were awarded for the top eight times, down from the usual 16 scoring positions. 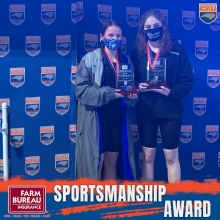 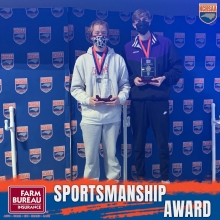 The NCHSAA is committed to recognizing and promoting good sportsmanship and has partnered with the NC Farm Bureau to highlight individuals from each State Championship event who exemplify the ideals of outstanding sportsmanship. The 2021 1A/2A Sportsmanship Award recipients were Sophie Welborn from Elkin, Eliot Hunsberger from Carrboro, Jackson Lee from Carrboro and Matty Burrows from Community School of Davidson. 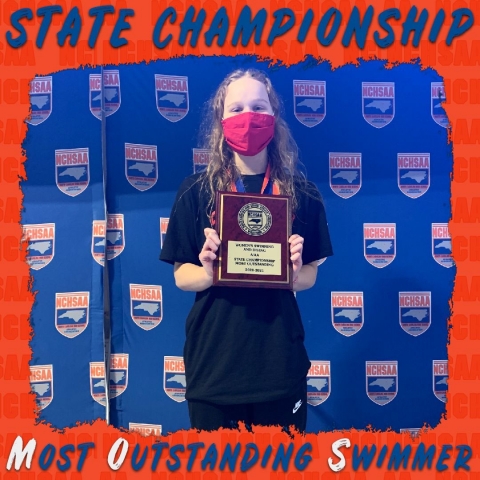 Emily Knorr from Salisbury was awarded the 1A/2A Women’s Most Outstanding Swimmer Award. Knorr won a pair of individual events, capturing the 200 Freestyle and 500 Freestyle, both in 1A/2A State Meet record times. Her 200 Freestyle time of 1:49.11 eclipsed the old mark of 1:49.31 set by Christina Lappin from Lincoln Charter in 2014. She also established a new 1A/2A State Meet record in the 500 Freestyle, touching in 4:49.04 just ahead of the former record, 4:49.20, held by Kelly Ann Baird from West Davidson in 2010.

Carrboro won the team’s third straight state meet on the strength of their depth and the success of their relay teams. The Jaguars 200 Freestyle Relay team of Kate Hegland, Emily Carpenter, Maya Lambert and Lindy Bilden powered to a winning time of 1:38.09. In the 400 Freestyle Relay, Carpenter, Bilden, Eliot Hunsberger and Hegland teamed to post 3:38.46 en route to the event win. Bilden was the only individual event winner for the Jaguars, taking the 50 Freestyle in 24.00 seconds.

Two additional 1A/2A State Meet Records were established during the meet. Joslyn Oakley from Langtree Charter performed exceptionally in the 1-Meter Diving event, posting an 11-dive score of 492.50. Her performance bested the 490.60 set by East Gaston’s Kyndal Knight in 2018. Jordan-Matthews’ Jennah Fadely touched in 1:02.11 for the 100 Breaststroke, trimming .03 seconds off the previous record set by Emme Nelson from Community School of Davidson a year ago.

Chase’s Jenna Bridges won the 100 Butterfly for the third consecutive year. Bridges raced to a time of 55.56 in her heat to claim the win.

Baylor Nelson from Community School of Davidson claimed the 1A/2A Men’s Most Outstanding Swimmer Award. Nelson set a new all-classification State Meet Record in the 200 Individual Medley, touching in 1:46.07. His performance eclipsed his own record of 1:47.17 one year ago in the 2020 State Meet. He also picked up a new 1A/2A State Meet Record in the 100 Butterfly, racing to a time of 48.15 seconds and besting the mark of 48.26 seconds set by Carrboro’s Will Macmillan in 2016. Nelson helped the Spartans to a second-place team finish.

Carrboro men captured the program’s first state championship since tying for the 2015 1A/2A team title with Shelby. The Jaguars won a pair of relay events, starting the meet with a win in the 200 Medley Relay thanks to a 1:36.04 performance from the quartet of Will Thompson, Brandon Miller, Andrew Commins and Jackson Lee. The Jaguars capped off the night in a similar fashion with a victory in the 400 Freestyle Relay as Commins, Miller, Kieran DeWalt and Thompson combined to post a time of 3:12.74.

No individuals from Carrboro won individual events on the men’s side, though Brandon Miller finished second in the 200 Individual Medley touching in 1:53.12, seven seconds behind the state meet record time of Nelson. Will Thompson from Carrboro was edged in the 100 Freestyle by 2019 event champion Will Barker from Croatan. Barker took the event for the second time in his career with a time of 45.29 seconds while Thompson touched in 46.58 seconds. Brandon Miller also posted a second-place finish for Carrboro, finishing second in the 500 Freestyle with a time of 4:33.26, just behind Nash Central’s Lance Norris who won in 4:20.83.

Croatan’s Barker was a two-event champion for the Cougars, grabbing the 100 Freestyle win and picking up his second straight title in the 100 Backstroke. Barker slipped in at 48.18 in the 100 Backstroke just in front of Nash Central’s Lance Norris who touched in 48.75 seconds.

Bradford Prep’s Reid Miller established a new 1A/2A State Meet Record for the 50 Freestyle sprinting to a time of 20.42 seconds and trimming the previous mark set by Raleigh Charter’s Joe Bonk in 2012 by .04 seconds.