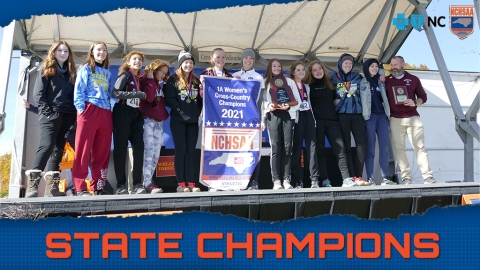 KERNERSVILLE, NC – Swain County freshman Arizona Blankenship led the 1A Women’s field by over eight seconds, winning the first individual championship for a female runner for the Maroon Devils. Blankenship powered the Maroon Devils to the 1A Team State Championship as well, helping them outscore Thomas Jefferson Classical 89-101 in the team standings. The team championship is the first team title for the Swain County women in Cross Country.

Blankenship completed the course in 19:06.19, outrunning Briley Bickerstaff from Riverside-Martin who clocked in at 19:14.81. Blankenship established a new NCHSAA 1A State Meet Record for the Revised Layout of the course at Ivey M. Redmon Complex, trimming the record of 19:15.05 set by Highland Tech’s Lauren Tolbert in the 2020-2021 Championship Meet.

Maroon Devils coming in behind Blankenship were Amaya Hicks in 14thoverall with a time of 21:19.94 while fellow junior Gracie Monteith checked in at 21:32.22 in 15th. Emily Ulaner finished 29thwith a time of 22:16.83 while Laiken Harvey rounded out the scoring five for Swain County at 23:21.13 in 52nd overall. Second-place in the team standings was Thomas Jefferson, led by Kaitlyn Rowe. The senior completed the 5K distance in 21:18.73 and finished 13th overall.

The NCHSAA and NC Farm Bureau Insurance Sportsmanship Awards for the 1A Women’s Championship went to Emily Ulaner from Swain County and Audrey Friedman from Thomas Jefferson. 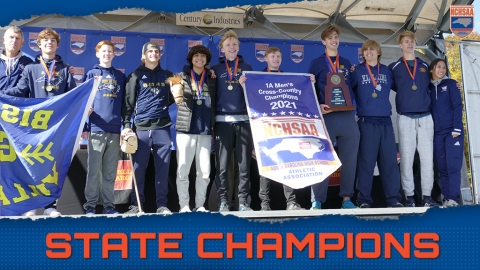 KERNERSVILLE, NC – Bishop McGuinness dominated the team competition at Ivey Redmon Complex, outracing second-place South Stanly by a 65-138 final tally. The individual championship was a two-man race between Corvian Community’s Jacob Fiorillo and Thomas Jefferson’s Carson Gilliam. The two ran stride-for-stride for most of the race, and Fiorillo pushed to the line just a few feet in front of Gilliam.

Fiorillo won Corvian Community’s first individual State Championship in Cross Country, crossing the line in 16:34.24. Gilliam trailed behind him, posting a time of 16:36.59, in one of the closer individual races in recent memory.

Bishop McGuinness was led by third-place finisher, C.J. Pacholke, who crossed in 16;52.89. Evan Sturgill trailed him for the Villains, clipping the line in 17:42.23 and 11th place overall. Arrington Culbertson crossed in 18:11.23 and 21st for the Villains while senior Noah Goodman finished in 25th at 18:14.57. Alessandro Lopez-Morales rounded out the scoring five for Bishop McGuinness as he finished 29th overall with a time of 18:19.83. Second-place team South Stanly was keyed by sophomore Josh Huneycutt who finished in 10th overall with a time of 17:35.32.

The NCHSAA and NC Farm Bureau Insurance Sportsmanship Awards for the 1A Men’s Championship went to Evan Sturgill from Bishop McGuinness and Josh Huneycutt from South Stanly. 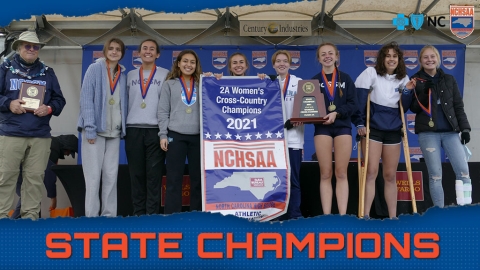 KERNERSVILLE, NC – Junior Lucy Murray from Brevard strode away from Franklin Academy’s Emily Myers in the final stretch of the 2A Women’s Cross Country Championships at Ivey Redmon Park. Murray clipped the tape in 19:26.50 and in doing so won Brevard’s first women’s cross country individual title since Macy Little’s win in the 1997 2A Race. Murray sped away from Myers late, as Myers crossed at the 19:35.82 mark.

Murray helped pace Brevard to a fourth-place finish in the team competition behind State Champions, NC School of Science & Math (NCSSM), Pine Lake Prep, and Community School of Davidson. The Unicorns of NCSSM were led by third place finisher Caitlyn Elliott who crossed in 19:38.74. Ella Evans was 11th overall for NCSSM with a time of 20:13.26 while teammates Valen Chapel and Meara Kane finished in 21:03.84 and 21:14.41, respectively. The Unicorns outscored second-place Pine Lake Prep 36-74, as Pine Lake Prep was led by sophomore Abby Pike who finished in 19:50.48.

The NCHSAA and NC Farm Bureau Insurance Sportsmanship Awards for the 2A Women’s Championship went to Rylee Hegedus from Pine Lake Prep and Valen Chapel from NCSSM. 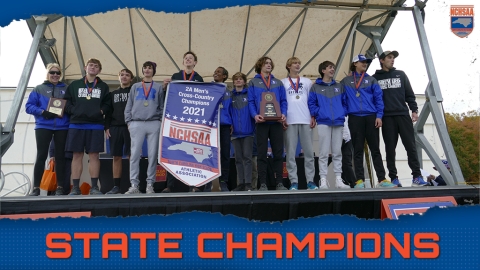 Brevard’s scoring five included a strong sixth place showing from Townsend Dierauf who crossed in 16:58.16 and a 12th place finished by Abdi Green who ran through in 17:16.66. The final two scoring runs for Brevard were from Eli Snowden and Noah McLauchlin who crossed in 17:55.98 and 18:02.27, respectively. Second place team Lincoln Charter was led by Brandon Wright who finished 7th overall in 16:59.48.

The NCHSAA and NC Farm Bureau Insurance Sportsmanship Awards for the 2A Men’s Championship went to Ben Bruce from Lincoln Charter and Noah McLauchlin from Brevard. 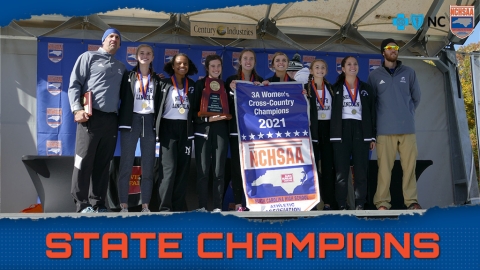 KERNERSVILLE, NC – Croatan’s Navaya Zales ran away from the field on her way to the school’s first individual state title in Cross Country for either gender. Zales posted a time of 18:12.97, easily holding off Carrboro’s Hannah Preisser who crossed in 18:43.75 to finish in second overall. The team championship went to North Lincoln which cruised to the title with a 59-150 tally over Carrboro in the race. The Knights collected their second straight Women’s Cross Country title after winning the 2A Championship a year ago.

The NCHSAA and NC Farm Bureau Insurance Sportsmanship Awards for the 3A Women’s Championship went to Emily Laramie from North Lincoln and Natalia Serre from Carrboro. 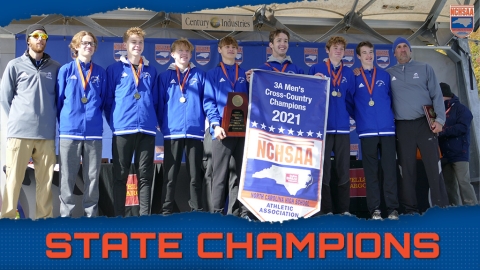 KERNERSVILLE, NC – Twin brothers led the field at the 3A Men’s Cross Country Championship as Zachary Willer nipped his brother Nicholas Willer by just under 3 seconds to win the school’s first Cross Country individual State Championship in either gender. Zachary crossed in 15:42.61 just in front of his twin Nicholas who finished in 15:45.32. North Lincoln’s team grabbed the school’s fifth straight Men’s Team State Championship, the first one at the 3A level after four consecutive wins in 2A.

The Knights won the program’s seventh state title overall, running behind Stephen Fernetti who led the team with a fourth-place finish at 15:50.44. Connor Bagwell showed well with a 22nd place time of 16:46.19 for North Lincoln. Alex Bradley followed behind him in 32nd at 17:10.89 while Mack Viverette came in 35th at 17:14.69. Mirko Glavan placed 39th for North Lincoln with a time of 17:23.54 to close out their scoring five runners. Second place Croatan was paced by senior Colten Rodriguez who closed out his career with a time of 16:14.30 to finish ninth overall.

The NCHSAA and NC Farm Bureau Insurance Sportsmanship Awards for the 3A Men’s Championship went to Colten Rodriguez from Croatan and Mark Viverette from North Lincoln. 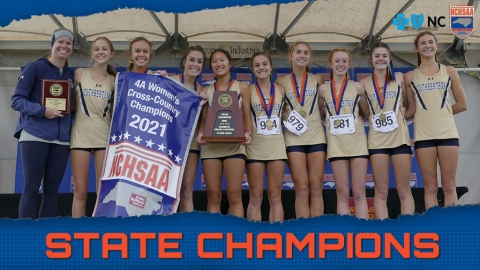 KERNERSVILLE, NC – Sarah Mitchell from Apex took down the 4A Women’s Course Record at Ivey Redmon Complex’s Revised layout, busting through the tape at 17:26.96 and eclipsing the 4A record set on this layout in 2016 by Leesville Road’s Nevada Mareno (17:27.62) and the top Individual Time in a 4A Meet set by Millbrook’s Sammy George in 2011 (17:27.19). Mitchell outlasted Cardinal Gibbons freshman Hannah Rae Shaffer who crossed in 17:32.55 coming in second place.

Cuthbertson grabbed the school’s fourth straight team State Championship, winning their first 4A crown after three straight wins at the 3A level. The Cavaliers bested cross-county rivals, Weddington, 50-98 in the final tally. Cavalier runners were led by Alyssa Preisano as the junior finished fourth with a time of 17:59.01. Sophomore Stella Kermes finished 9th in 18:21.24 while teammate Lillian Nasta checked in two spots behind her in 11th at 18:28.95. Charlotte Bell and Justine Preisano capped the Cavalier scorers at 16th and 17thoverall, finishing with times of 18:35.91 and 18:36.70, respectively. Second place Weddington was led by Emma Jones who finished in fifth posting a time of 18:07.41.

The NCHSAA and NC Farm Bureau Insurance Sportsmanship Awards for the 4A Women’s Championship went to Samantha Hoover from Cuthbertson and Emma Jones from Weddington. 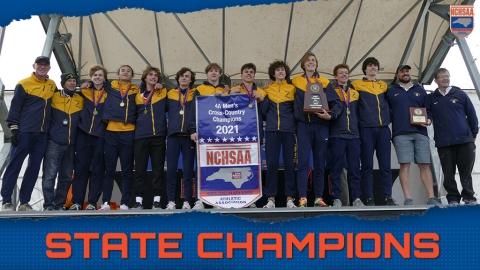 KERNERSVILLE, NC – Will Soule led the field at Ivey Redmon Complex, holding off a good challenge from Porter Ridge’s Jacob Laney in the final stretch, as Soule led Mount Tabor to the school’s fifth Men’s Team State Championship and the first since a 3A Crown in 2017. Soule crossed the line in 15:31.62, outstriding Laney who landed in 15:34.33. The individual win was a fifth individual title for a Mount Tabor runner on the men’s side, their first since 2017 when Cameron Ponder collected the title.

Mount Tabor held off a solid challenge from second place Weddington to win the team event, outscoring the Warriors 64-75 in the final tally. Tabor placed three runners in the top ten of the events, in addition to Soule, Davis Potter finished sixth at 15:51.45 and Douglas Gledhill finished ninth in 15:53.22. The Spartans scoring team finished with Andrew Burrell who crossed in 21st at 16:09.29 and Lucas Plitt in 43rd at 16:28.97. The lead runner for Weddington was Isaac Clark who finished in 15:57.77 and 11thoverall.

The NCHSAA and NC Farm Bureau Insurance Sportsmanship Awards for the 4A Men’s Championship went to Conner Inman from Mount Tabor and Gavin Boutwell from Weddington.