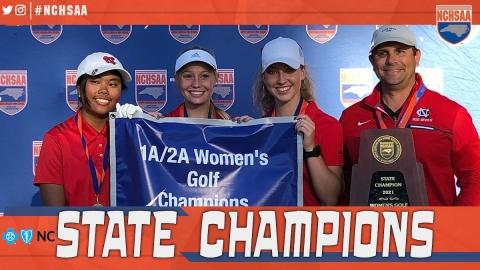 SOUTHERN PINES, NC – Katelyn Griggs was a force to be reckoned with at Longleaf Golf and Family Club. The junior from Gray Stone Day held off Hayesville’s Madison Logan by three shots to win the 1A/2A Individual State Championship. Newton-Conover used their nine-shot lead overnight to hold off Raleigh Charter by 16-shots in the tournament and win the school’s first team state championship in Women’s Golf.

Griggs played a beautiful 2-over, 74, on day one of the tournament. She led by one shot overnight, as Hayesville’s Logan lurked at 3-over, 75. However, the wind picked up on day two and the scores went higher. Griggs held things together long enough in challenging conditions, carding a 7-over, 79 on her way to a 9-over, 153 for the tournament.

The junior, Griggs, brought home the hardware with a solid 2-over, 39 on the back nine, bogeying just two holes on the final nine on her way to the Championship. The back nine was also good to her on Monday, as she carded a 1-under, 36, on day one with a birdie on the par four 18th hole to wrap up her clean final nine. Griggs became the first player to win the Individual State Championship from Gray Stone Day. 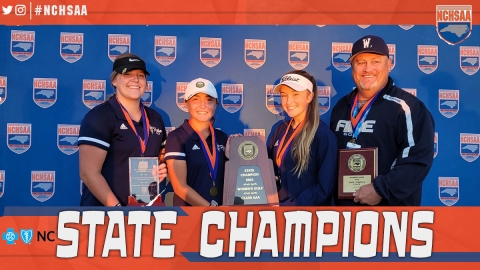 JACKSON SPRINGS, NC – Eastern Alamance’s Emily Mathews ran through the Gray Course at Foxfire Resort in 3-under, 69, on the final day of competition to card an even-par, 144, for the tournament and claim the 3A Individual State Championship in Women’s Golf. Mathews claimed her second straight individual title after winning the 3A title a year ago at Beacon Ridge.

Mathews carded five birdies against just a pair of bogeys in round two. She finished strong with three birdies in a four hole stretch from the par five 13th through the par five 16th on her way to a 2-under, 34, on the back nine. The strong back nine was a six-stroke improvement for Mathews from her 4-over, 40, in the opening round on her way to carding a 3-over, 75 for the day and a three-shot overnight lead.

Jacksonville’s Sanaa Carter was steady both days, shooting 6-over, 78, on both days of competition to hold off South Brunswick’s Jillian Fatkin by a single shot for second place honors.

The Golden Demons from Fike were the victorious team, holding off Union Pines by just three shots to win the Demons’ first State Championship in Women’s Golf. Fike was led by Bree Council who finished tied for 7th at 24-over, 168. Avery Briley contributed a 42-over, 186, to the Golden Demon effort, placing tied for 23rd overall. The pair was joined by teammate Morgan Harold who finished tied for 54th at 67-over, 211. 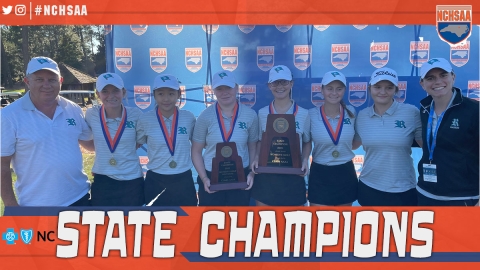 PINEHURST, NC – The Reagan Raiders captured their third team title in the last four years, winning back-to-back 4A crowns as they blistered Pinehurst No. 5 with a two-round team 434, or 2-over par. Morgan Ketchum led the way for the Raiders, after battling to a 3-over 75 in the opening round, Ketchum came alive on the final day of the competition, firing a 7-under 65, a new State Tournament single round record. Ketchum’s 65 bested the 67 set by three players, including yesterday’s low-scorer, Ellie Hildreth from Hoggard, who slipped back to fifth place finish at 2-over, 146, after a 5-under opening round that tied the State Tournament record.

Reagan’s three scoring rounds came from Ketchum, Macy Pate, and Anna Howerton. Last year’s individual champion, Pate, carded an even-par, 144, for the tournament, finishing in a tie for second overall with Elizabeth Rudisill from Myers Park. Howerton played solidly, posting a 6-over, 150, placing tied for 11th in the individual event and helping the Raiders knock off Cardinal Gibbons, who placed second with a 17-over, 449, thanks to the steady hands of Ella Perna (+1), Ann Lattie Jackson (+5), and Kaitlyn Rand (+2).

The individual championship for Ketchum was the fourth individual title in Women’s Golf for the school. She joined Pate, last year’s champion, Sasha Hayes, the 2018 winner, and Victoria Allred, the champion in 2011, as the school’s individual state champions in the sport.