ABOUT THE SCHOLARSHIP WINNERS 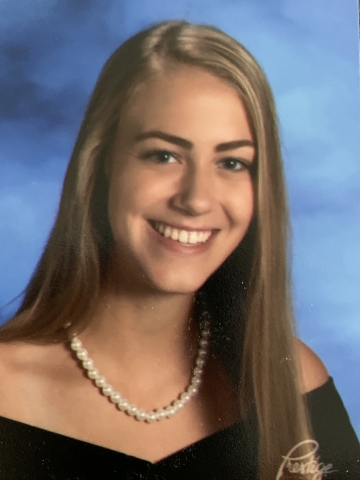 Madeline Dierauf is a student at Brevard High School where she is a varsity cross country and track athlete. Dierauf has received a number of accolades including being a member of the school’s Mountain 6 Conference Championship team and the 2A West Regional Championship team. She placed first in the 1600 meter run in the Mountain 6 Conference meet, the Franklin 4 meet, and in the 3200 meter run at the Leesa Anderson Invitational. Outside of her athleticism, Madeline is an accomplished musician, who plays Bluegrass and Irish Traditional Fiddle Music and will pursue her studies in political science and music this fall.

Peter Petroff is a student at Concord High School where he was a two-sport athlete in football and wrestling each of four years with the Spiders. During his senior year, Mr. Petroff was the team captain for his varsity wrestling and football teams. In addition to being recognized for his leadership, Peter has also received a number of honors including selection as a member of the All-Conference team for both wrestling and football. Petroff is a member of the National Honor Society and the National Science Honor Society. He is also an accomplished pianist and plans to double major in English and Economics this fall.

ABOUT THE CHARLIE ADAMS ENDOWED SCHOLARSHIP

The Charlie Adams Endowed Scholarship was created in honor of Charlie Adams, former executive director of the NCHSAA, for his more than 40 years of dedication to helping the boys and girls of North Carolina by offering opportunities to participate in athletics. Adams led the Association through huge transitions and great expansions during his tenure as Executive Director from 1984 until he retired in 2010. He was the fifth Executive Director in the history of the Association. Prior to becoming executive director, Adams served as assistant executive director and supervisor of officials for the Association for some 17 years. He passed away in 2017 at the age of 81.

The female award is given in honor of his daughter, Michelle Adams Szwajkun, who participated at Chapel Hill High School on the cross-country team, including a spot on the 1984 state championship team. The male award is given in memory of Charlie Adams’ son, C. Scott Adams, who wrestled at Chapel Hill High and was the first Tiger to compete in the state wrestling championships, finishing fourth overall.