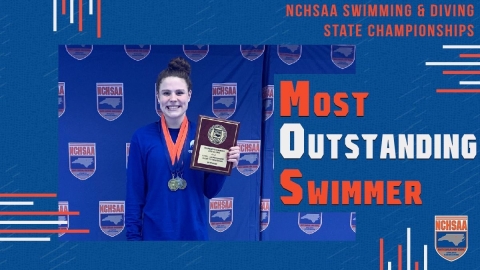 Emme Nelson from Community School of Davidson claimed the Most Outstanding Swimmer for the women’s meet. Nelson touched first in two events and participated on a victorious relay team. She and her 200 Medley Relay teammates Katie Tolone, Eliana White and Meredith Tucker won the meet’s opening event in a time of 1:48.18 as Nelson swam the second leg for the squad. Nelson capped off her high school career winning the 200 Individual Medley and 100 Breaststroke. She won the 200 IM for the fourth time in her career, touching in 2:03.49 and cruising to the victory by over four seconds. She also won the 100 Breaststroke for the fourth time in her career, edging the field with a time of 1:02.81 for her final high school swim. 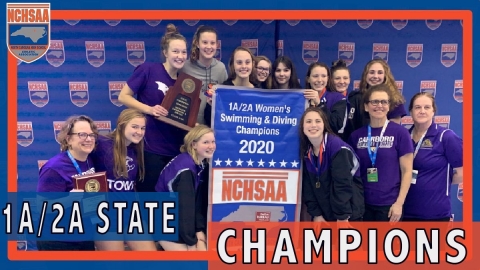 Carrboro won two of the meet’s three relay events. The Jaguars team of Emily Carpenter, Lucy Carroll, Lindy Bilden and Kate Hegland combined to win the 200 and 400 Freestyle Relay events. The quartet touched in 1:38.13 to win the 200 Free Relay, racing past second place Community School of Davidson. Then in the final women’s race of the night, the foursome blitzed past the field by more than five seconds, touching in 3:33.54. Bilden also managed to win the individual title in the 50 Freestyle, posting a time of 23.65 seconds.

Emily Knorr from Salisbury also won a pair of individual events. Knorr captured the 200 Freestyle in 1:50.56, holding off Ede Kosik from Voyager Academy. Then Knorr dominated the 500 Freestyle, winning the event for the second straight year by posting a time of 4:52.40, over three seconds clear of the field. 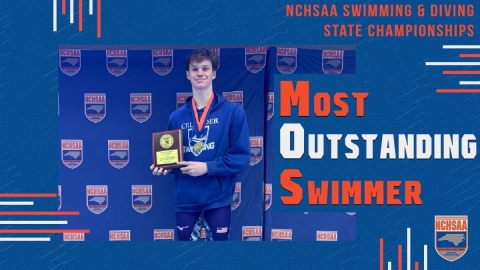 Timothy Connery from Christ the King High School was named the Most Outstanding Swimmer for the men’s competition. Connery set two new state meet records. Connery nipped the 100 Freestyle state record with a time of 44.18 seconds, eclipsing the mark of 44.62 seconds set just last year in the 3A meet by Chapel Hill’s Sam Hoover. Then in the 100 Breaststroke final, Connery powered to a time of 53.65 seconds, crushing the previous state record of 54.47 seconds set by Hough’s Will Chan in the 2017 4A Final.

Community School of Davidson’s Baylor Nelson set the first state meet record of the day, racing to a new record in the 200 Individual Medley. Nelson won the event for the second year in a row and posted a time of 1:47.17, which trimmed the record of 1:48.16 set by Matt Houser from J.H. Rose in 2009. Nelson also earned a state title in the 100 Butterfly, touching in 48.76 seconds. 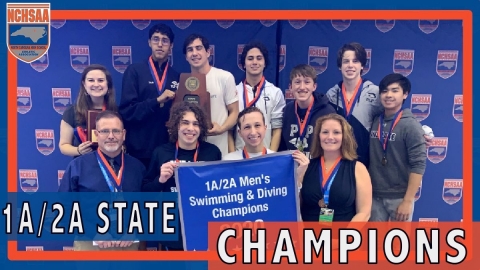 Pine Lake Prep capped off the night, putting an exclamation point on the program’s first team state championship by winning the 400 Freestyle Relay. It was Pine Lake Prep’s only event win of the Championships. Nathan Adams, Deaven Holder, Nathan Thornbury and A.J. Das combined to win the race for Pine Lake Prep, touching in 3:13.06.