1A Championship: Union Academy gets golden goal to knock out Franklin Academy in OT 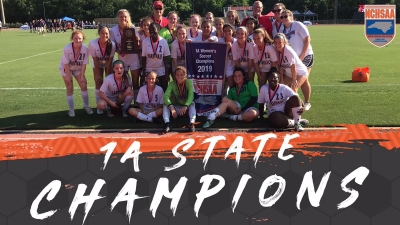 RALEIGH, NC - In a defensively-minded 1A State Championship, it was the Cardinals of Union Academy that prevailed in the second “Golden Goal” overtime 2-1 over Franklin Academy to win the school’s second Women’s Soccer State Championship in two years. The Cardinals winning goal came from Junior Midfielder Sarah Brown who sprinted upfield with under a minute to play to join the decisive attack in the final overtime period. Brown’s game-winning boot earned her the game’s Most Valuable Player.

The first 15 minutes of play remained scoreless until Kelsey Havican of Union Academy scored on a beautiful assist from Rebecca Garcia at the 19th minute of the match to put the Cardinals up 1-0. Franklin Academy had several opportunities to tie the game in the first half with five shots, in comparison to the Cardinals’ six shots.

Union Academy stood firm on defense throughout the second before Franklin Academy’s Ashlynn Stephan ripped in a goal from the corner of the box at the 58th-minute mark to even the score at one. The Patriots and Cardinals both remained strong on defense for the remainder of the second half, forcing overtime where both teams failed to net goals until the decisive blow by Brown. 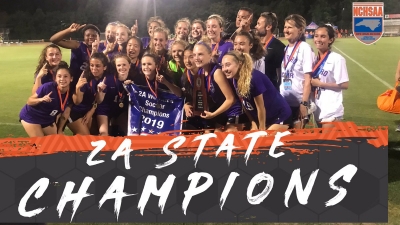 Carrboro’s winning goal occurred during the seventh round of the penalty kick shootout. Lake Norman Charter’s Ally Smith was stopped on her attempt, while Carrboro’s Olivia Winker drilled her attempt to win the 2019 State Championship Title. MVP Navia Mosley played an outstanding game, while also netting a much-needed penalty kick during round 4.

The first goal of the match occurred quickly, as MVP Mosley of Carrboro knocked it home off a corner sent in by Brynn Holt-Ling at the five-minute mark. The Jaguars lead did not last long with Ayden Yates of Lake Norman Charter finding the back of the net at the 15th minute to tie the game at 1-1. The remainder of the half was evenly played with both teams tightening up on the defensive side of the ball.

The Jaguars and Knights both had ample opportunities offensively during the front end of the second half. The match saw an impactful change once a player from Lake Norman Charter received their second yellow card of the day, resulting in the Knights playing with ten players for the remainder of the game. Both teams displayed strong defensive stands, thwarting many numerous offensive attacks, resulting in overtime.

Carrboro had the first scoring opportunity of overtime as Brynn Holt-Ling fired one in for the Jaguars, but goalkeeper Kaela Rasenberger of Lake Norman Charter skillfully stopped her attempt. The Jaguars and Knights played scoreless through the two overtime periods. Although the overtime periods were uneventful, Lake Norman Charter received a red card for unsportsmanlike conduct in the last minutes of the second overtime, resulting in the Knights playing with nine players for the remainder of the game. 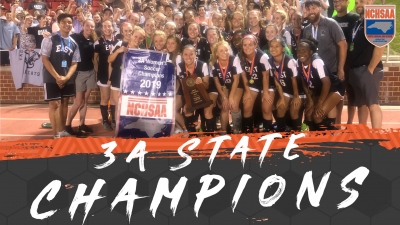 East Chapel Hill had their way in the first half scoring quickly to open the game as Sophia Coon of the Wildcats drilled one in off an assist by Kate Sheslow in the 2ndminute. The Wildcats would find the back of the net again at the 17thminute, with Sophia Coon scoring once more by sending one off the bar and in. Goalkeeper Tierney McConnel of East Chapel Hill, along with the Wildcats defense, played a spectacular first half, preserving their lead 2-0 at the half.

The Wildcats had not conceded a goal all postseason and that defensive dominance continued for East Chapel Hill throughout the State Championship. T.C Robinson had numerous attempts on the offensive side of the field but could not get past the Wildcats defensive line and goalkeeper McConnel. East Chapel Hill completed its shutout postseason against the Rams, resulting in the Wildcats fourth state title in program history. 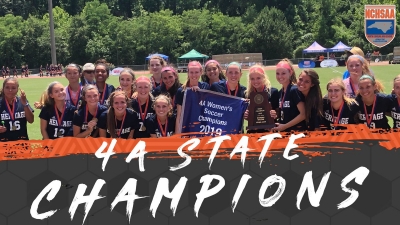 RALEIGH, NC - After a strong defensive performance by both teams in regulation and overtime, the Heritage Huskies won the school’s first Women’s Soccer State Championship in a penalty kick shootout over Pinecrest 1-1 (4-2 PK). Defenseman Braelyn Francher of Heritage was awarded the game’s Most Valuable Player after breaking up the momentum on several attacks by the Patriots throughout the game and scoring one of the four successful attempts for Heritage during the penalty kick shootout.

Heritage dominated possession in the first half, but the Huskies failed to get a goal past the Patriots’ back line and goalkeeper Carley Modlin. Pinecrest was unable to get the ball past midfield for most of the first half, due to strong pressure from the Huskies.

The Huskies pushed forward in the 53rd minute with Raegan Meyer burying a chance in the box, to put Heritage up 1-0 with 27 minutes remaining in the game. Pinecrest’s Madi Pry responded with a beautiful free kick goal right outside the far left of the box in the 56th minute to tie the match 1-1. Both teams had several opportunities on goal during the second half but were unable to capitalize in regulation.

In the first round of penalty kicks, Jessica Cannon of the Huskies missed off the post, while Keeley Copper of the Patriots squeaked her goal into the bottom right corner. Fain Buete and Hayley Boyles of Heritage both drilled their attempts in the second and third round. Pinecrest’s Madi Pry and Lauren Landry missed the mark on each of their attempts. In the fourth round of penalty kicks, both Braelyn Francher of Heritage and Parker Mecimore of Pinecrest put the ball past the goalies for a score. Finally, Bri Holt of the Huskies ended the game, scoring with a shot to the back left of the net that lifted the Huskies to a 4-2 victory in penalty kicks.