NCHSAA announces 2018-19 Athletes of the Year

The Male and Female Athlete of the Year awards are in their 34thyear of presentations with the Association. Recipients are selected from a pool of nominees from media and school administrators across the state. Nominations were pared down to three male, and three female athletes voted on by NCHSAA Staff and selected media members across the state. 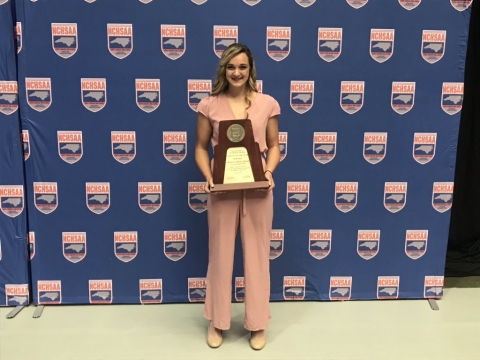 Chesney Cooper Gardner is a three-sport athlete participating in volleyball, basketball, and outdoor track & field. The senior earned Western Highlands Conference Player of the Year honors in Volleyball for 2018, was First-team All-Western North Carolina, and the Team MVP. She had 491 kills on the season in 197 sets played across her three-year volleyball career.

In Basketball, Gardner was All-Conference for 2018-19, First Team All-Western North Carolina, on the All-Tournament Team for the Conference, and named the Team MVP. She averaged 26.4 points per game during her senior season, bringing her career total up to 1946 (One Thousand, Nine Hundred, and Forty-Six). She also averaged 10.1 rebounds a game during her senior year, bringing her career rebounding total to 1,004 (One Thousand and Four) career rebounds.

In Track and Field, Gardner is an excellent performer in the field events, particularly the discus and shot. At the time of nominations, she ranked first in the state this season in all classifications in the Discus throw and was second in 2A for the shot put.

Remarkably, Chesney was involved in a serious car accident in 2012 when she was 11, riding back from horseback riding practice, is fueled by the memory of her best friend, Kori Goodson, who was pronounced dead at the scene of the accident. Gardner suffered a broken hip, fractured pelvis, and a spinal fracture that left her temporarily paralyzed on one side of her body, and doctors initially feared she might never walk again. She persevered and proved them wrong and is a testament to what is possible with determination, courage, and perseverance. 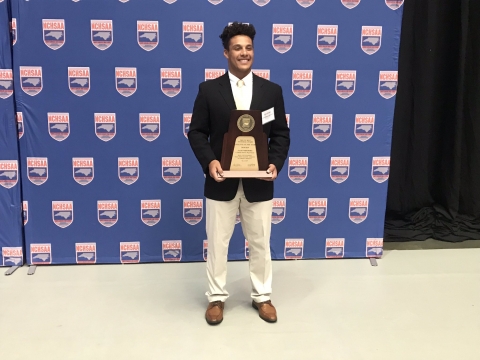 Jalen Brooks is a three-sport athlete at Cardinal Gibbons High School in Raleigh. He participates in football, wrestling, and lacrosse. Brooks is a dominating force on the Cardinal Gibbons defensive unit in football, a three-year starter at defensive end and fullback. For the second consecutive year, he was named the Cap 7 4A Conference Defensive Player of the Year and an All-Conference and All-State Performer. Brooks rushed for 17 touchdowns in his career on just 58 carries. He made 177 total tackles, with 116 of them coming solo and 68 for a loss. He also served as team captain.

Brooks is also a two-time state champion in wrestling, winning the 220-pound 4A division in each of the last two seasons. He wrapped up his senior season in the State Championship match with a 42-0 record on the year. In his junior season, he posted a 40-0 record and a State Championship. During his Sophomore season, Brooks wrapped up the year with a 35-6 record and a runner-up finish in the 220-pound division.

This year, Brooks elected to give Lacrosse a try for the first time competitively. At the time of nomination, he had participated in 9 games, winning 24 of the 30 faceoffs he had taken and winning 21 groundballs. He has taken to the sport quickly and is contributing to the perennially successful Crusader program. Brooks has committed to the United States Military Academy at West Point to continue his football career.