2A Women’s Championship: Cummings blasts past the field for program’s sixteenth State Championship

Kendall Jordan was the star of the meet and for Cummings, winning three individual events. Jordan won the 100 Meter Hurdles, finishing in 14.11 seconds in the finals before cruising to a time of 43.03 seconds to win the 300 Meter Hurdles. Jordan also won the Triple Jump, crossing a distance of 40’ 4.75” with her best attempt. Jordan was named the meet’s Most Valuable Performer.

Jordan’s teammate Allysia Farrar won a pair of events for the Cavaliers. Farrar claimed victory in the 100 Meter Dash, posting a time of 11.92 seconds. She also won the 200 Meter Dash, crossing in a time of 24.85 seconds, helping Cummings to outscore second-place Durham School of the Arts 90-50 in the final team count.

There were four new State Meet Records for the 2A Classification established during the meet. Two relay events saw new records posted as well as two field events. Surry Central’s Sarah Brown cleared 12’ 6.5” to set a new 2A Meet Record in the Pole Vault while Teteateh Snoh from Durham School of the Arts tossed 143’10” in the Discus to set the new 2A Meet Mark.

The 4 X 100 Meter Relay for Lexington’s quartet of Aquariah McIntosh, Ziavia Calvin, Ny’Lasia Brown and Alyssa Thompson Rowe was the fastest 2A time in State Meet history as the group combined for a time of 48.04 seconds. The 4 X 400 Meter Relay time of 4:00.23 by Ledford’s team of Breanna Walls, Skylar Payne, Lyrik Thorne and Samantha Payne also established a new 2A meet record. 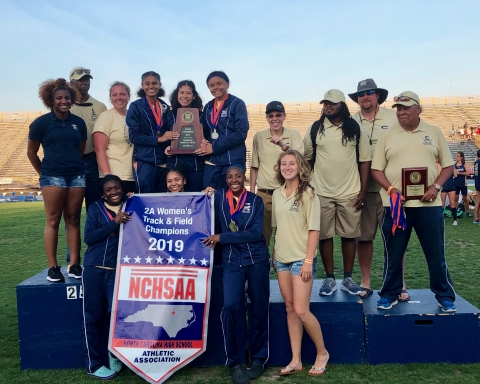 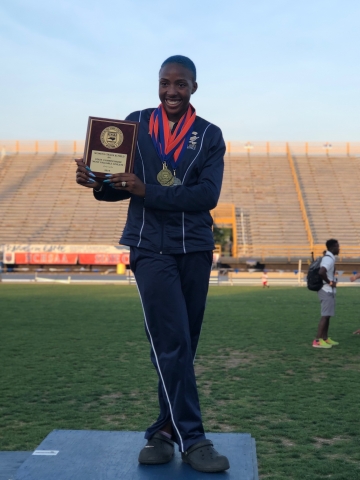 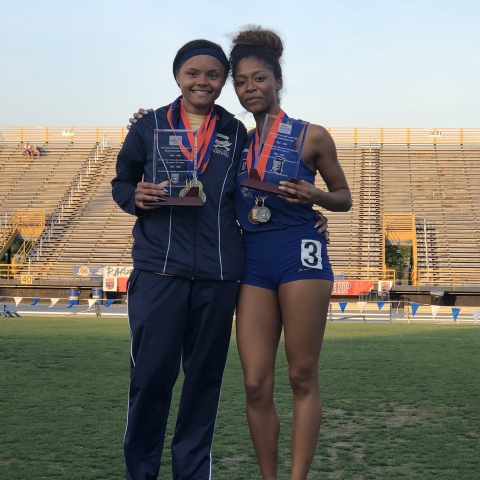 North Lincoln claimed the 2A Men’s Team State Championship, the first in program history, thanks to four event winners. The team combined to outscore second-place Croatan 76.5 to 57 in the meet.

North Lincoln runners won both of the individual long-distance races in the meet claiming the 1600 & 3200 Meter Runs. Jason Thomson earned first in the 1600 Meter Run, crossing in a time of 4:22.07 to claim the top spot. His teammate Brian Risse was the first to finish in the 3200 Meters, climbing to the top of the podium in 9:30.59.

North Lincoln’s Jake Soorus won both of the throwing events in field competition. Soorus tossed the Shot Put 56’ 6.5” to win first place and threw 175’ 11” to earn first in the Discus. 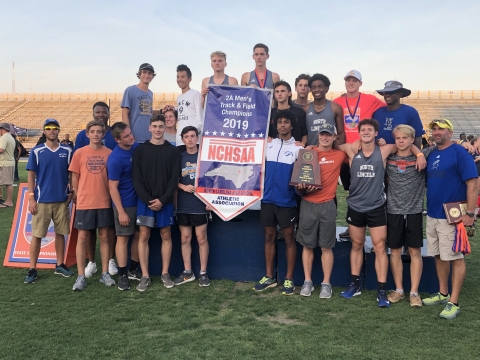 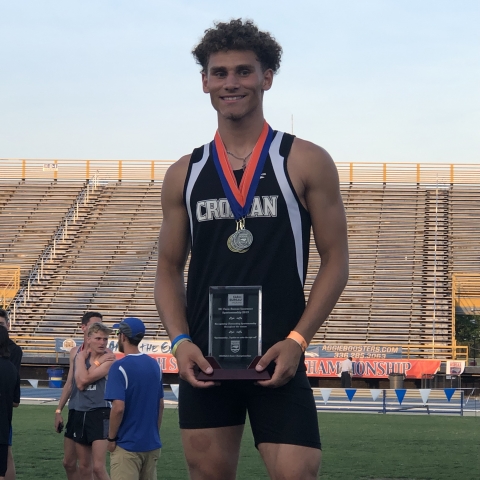 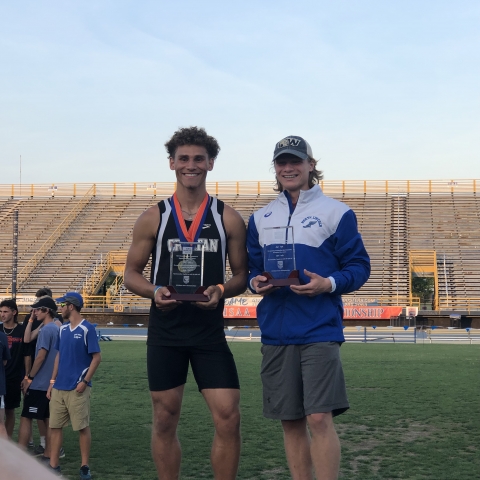 The Parkland Mustangs brought home the program’s third NCHSAA Team Championship, holding off a hard challenge from Cuthbertson 78-71. The Mustangs championship was their first since winning back-to-back 4A Championships in 2014 and 2015.

Alexis Patterson was the Most Valuable Performer in the meet as the Parkland star sped to victory in the 100 Meter Dash, the 100 Meter Hurdles and shared the top of the podium with three teammates on the victorious 4 X 200 Meter Relay team. Patterson set a new 3A State Meet record in the 100 Meter Hurdles, crossing in 13.91 seconds to break Nyile Facey of Southwest Guilford’s 14.00 second time established in last year’s meet.

Patterson also sped to victory in the 100 Meter Dash, posting a winning time of 11.95 seconds in the finals. She then combined with Ija Mumford, Del’Nique Penn, and Diamond Lyerly to set a new 3A State Meet record in the 4 X 200 Meter Relay, crossing in 1:38.29.

Other individual event winners for Parkland included Mumford who claimed victory in the long jump by crossing 18’ 3.75” on her best attempt. Parkland also won the 4 X 100 Relay event as Karisma Marte, Jadai Stevenson-Damon, Lyerly and Penn teamed up to win in 47.10 seconds.

Alysia Johnson from Hillside won a pair of individual events and participated on a victorious 4 X 400 Meter Relay team. Johnson set a new 3A Meet record in the 400 Meter Dash, crossing the line in 53.50 seconds and trimming more than two seconds off the 3A record time of 55.60 seconds set by April Cook from Watauga in 1983. Johnson also won the 200 Meter Dash, posting a time of 23.73 seconds in victory. She anchored the victorious 4 X 400 Meter Relay team for Hillside, combining with Imari Deloatch, Shaliyah Wilkerson and Emmaya Waters to set a new 3A Meet record of 3:51.26. 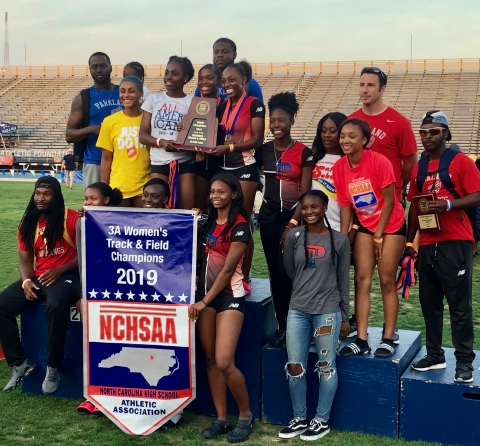 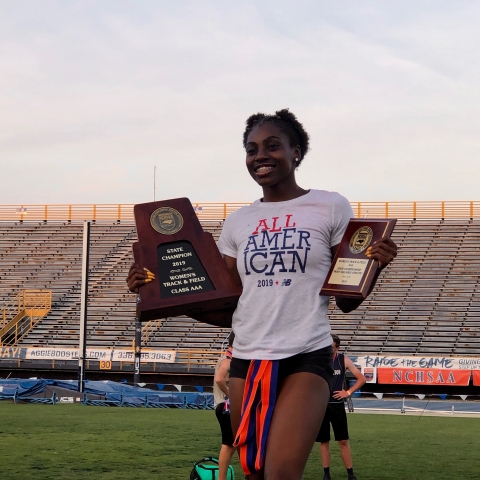 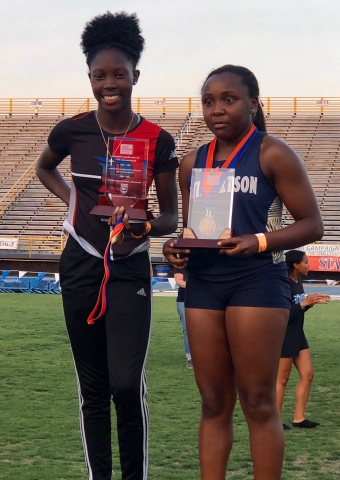 The Weddington Warriors captured the program’s third straight 3A team championship sprinting past the field in the 3A team race by a 102-53 count over second-place Cuthbertson. Meet Most Valuable Performer, Emerson Douds from Weddington, won a pair of individual sprint events before joining three teammates on top of the podium for the triumphant 4 X 400 Meter Relay team.

Douds sped to victory in the 100 Meter Dash, posting a time of 10.77 seconds in the finals to knock off Michael Allen of J.H. Rose who won the preliminary heat in 10.70 seconds. Then in the 200 Meter Dash, Douds powered to victory in 21.78 seconds. He provided the anchor leg to lift Kyle Durham, Will Mazur, and Jake Toomey to the top of the podium with him in the 4 X 400 Meter Relay, combining for a time of 3:17.92.

The Warriors also earned a victory in the 4 x 800 Meter Relay as Krystopher Durham, Stephen Larson, Toomey and Jackson O’Hara rolled to victory in 7:52.18. Weddington’s Kyle Durham set a new 3A State Meet record in the 800 Meter Run, winning in a time of 1:51.72 to break the 2015 mark of East Henderson’s Tavis Baldwin. Alec Mock claimed the only field event win for Weddington, tossing the Shot Put 53’ 8.5” to earn top honors.

Southern Durham’s Khaleb McRae had an outstanding performance in the 300 Meter Hurdles, setting a new 3A State Meet record on his way past the field. McRae finished in 36.78 seconds, eclipsing the record of South Iredell’s Cory Gaither who finished the same event in 37.18 seconds a year ago. 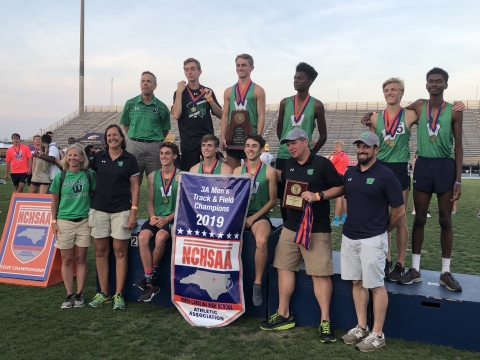 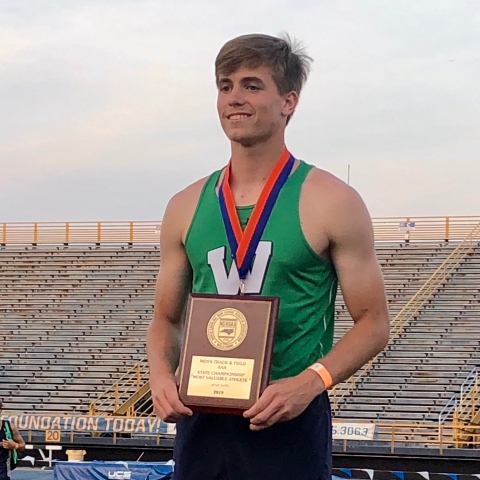 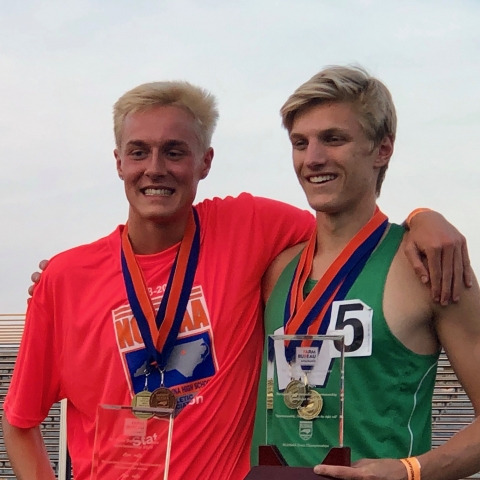