The 2019 NCHSAA Men's Golf State Championships have concluded in Pinehurst. Please find results and other information from the tournament here on this page. 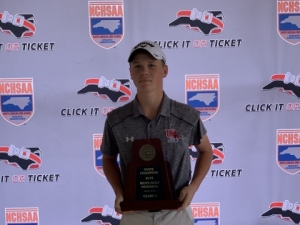 After an up-and-down round of even-par on Monday, Surratt played a steady-handed round in day two, carding 1-under, 71, with three birdies on the day. He earned the school’s second NCHSAA Individual State Championship in Men’s Golf, equaling the championship of Nick Smith in 2016. 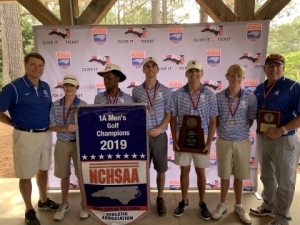 Community School of Davidson golfers claimed the school’s second men’s golf championship, and their second consecutive title, pulling away from East Surry on day two of the tournament. The Spartans entered the final round with a slim three-shot lead over East Surry, but pulled away to a 17-shot final margin, by lowering their combined round one total of 335 to 326 on the tournament’s final day.

Christian Jarrell led the way for Community School of Davidson, posting a four-over, 76, in the tournament’s final round. He finished the tournament at seven-over, 151, which put him in third place overall. The Spartans’ Brendan Cole finished tied for 15thoverall, with a 22-over score of 166. Alex Williams and Conner Maddox each contributed 28-over, 172 totals, for champions.

Jarrell was also named one of two winners of the NC Farm Bureau Sportsmanship Awards for the tournament. The other Sportsmanship Award went to Jason Moore from the state runners-up, East Surry. East Surry was paced by Landon Barnes who finished tied for tenth at 20-over for the tournament. Chase Harris also performed well for the Cardinals, firing 24-over, 168, to put him in a tie for 19th.

In the 1A Championship, Union Academy’s Caleb Surratt holds a one-shot lead on Highland Tech’s Addison Beam. Surratt fired an even-par 72 at Pinehurst No. 6 in a round that included four birdies. Beam also carded four birdies, but had five bogeys on his round, including three in a row on the third, fourth and fifth holes. Community School of Davidson holds a three-shot lead over East Surry in the race for the team state championship. Scores are compiled by taking the top four scores from a team’s five players in the field. Community School of Davidson was powered by Christian Jarrell’s 4-over, 76. East Surry was led by Landon Barnes who fired an 8-over, 80 to lead his team. 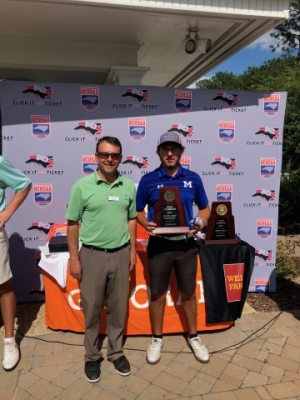 Patrick came into the day as the lone player under par in the field. While he gave a few shots back to the course, he maintained a comfortable lead for the majority of the day, posting a 2-over, 74, on the final day of competition. Patrick’s lone birdie of the final round came on the par 3 sixth hole.

Though he trailed by five shots entering the day, West Stanly’s Chase Clayton feverishly tried to chase Patrick down during the final round. Clayton posted a round with five birdies on the card, four of them on the back nine. His efforts led to a 1-under, 71, in the final round and a second place finish. 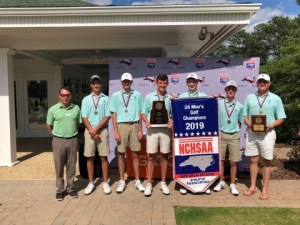 Ian Johnson led Lake Norman Charter to their first team state championship in program history, carding a 7-over, 151, to finish in a tie for third in the tournament and as the Knights’ top performer. Carter Busse was steady both days for the Knights, carding a 77 and 76 in the two rounds respectively, and finishing in a tie for seventh overall. Jace Arko also played well for Lake Norman Charter, powering his way to a 3-over second round and 11-over two-day total.

The 2A Championship saw Midway's Logan Patrick jump out to a two-shot lead after day one over Lake Norman Charter's Ian Johnson. Patrick shot a one-under, 71, with four birdies on the day while overcoming back-to-back bogeys on the first and second holes. Meanwhile, Johnson's one-over, 73, has Lake Norman Charter on top of the team competition by thirteen strokes over Midway. All four scoring players for the Knights shot 80 or better in round one, with Carter Busse firing a five-over, 77, and Jace Arko and Will Dalton each carding eight-over rounds of 80. 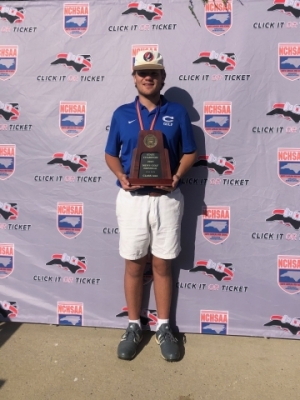 Hooks trailed Charlotte Catholic’s Jack Heath by a single stroke coming into the final round of play after Heath carded a 3-under, 69, on day one. Hooks was the steadier of the two players in the final round, coming home in 2-over, 74, on the final day. After a birdie on the opening hole, Hooks bogeyed the next two. He righted the ship on the par 5 fourth hole with another birdie, his second of three on the day. But then the fifth and sixth holes saw bogeys added to his card.

After a tumultuous start, Hooks settled into the round, with pars on every remaining hole except for his birdie on the par 4 11thand bogey on the par 3 13th.  The overnight leader, Heath, faired similarly on the front nine, recording a pair of birdies to offset three bogeys. However, the final nine proved difficult for the leader, as he opened the back nine with a bogey on the 10thand a double bogey on the 11th. He tacked on two more bogeys in the final seven holes to go with five pars, sending his total to 6-over, 78, for the final round. 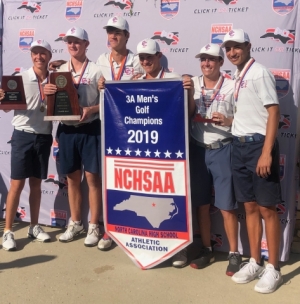 Despite a difficult final nine, Heath managed to finish in a tie for second with his Charlotte Catholic teammate, Drew Hackett, who closed the tournament with a 36-hole total of 147. The two led the Cougars to a second straight 3A team State Championship. Alex Campbell also contributed to the Cougars victory with a 7-over, 151, putting him in a tie for seventh overall. John Fahey finished in a tie for 15th, rounding out the Cougars scoring with a 10-over, 154.

Charlotte Catholic's Jack Heath leads the tournament by a single shot over Clayton's Brady Hooks. Heath fired a three-under, 69, on the opening round of the tournament, including an eagle at the par-5 ninth hole. In the team competition, Heath and his fellow Cougars lead Hooks and the Comets from Clayton by 13 shots. Charlotte Catholic's Heath, Drew Hacket, Alex Campbell and John Fahey all combined for a five-over, 293. Hackett shot even-par, 72, while Campbell carded 75 and Fahey posted 77. 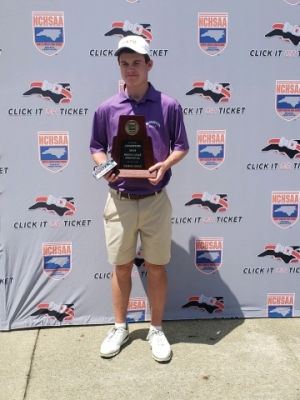 PINEHURST, NC – The North Carolina High School Athletic Association (NCHSAA) 4A Men’s Golf Championships concluded at Pinehurst No. 8. Patrick Fountain was a man on a mission, as the Broughton junior was the only player below par for the tournament, running away to the individual state championship. Myers Park claimed the team title, clipping New Bern by just two shots, to win the program’s fifth team state title and first since 1956.

Just one year removed from losing the 4A Championship in a one-hole playoff, Fountain would not be denied. After sleeping on a one-shot lead, Fountain turned in a beautiful 4-under, 68, in the final round, pulling away to a 7-under 137 and an eight-shot win. His 137 two-round total puts him in a tie for eighth all-time lowest 36-hole total in the NCHSAA State Tournament.

Fountain played the opening three holes perfectly, birding all three, before finally giving a shot back with a bogey on the par 3 eighth. Then on the 12thhole, a 353-yard par 4, Fountain got down in two, pushing his round to 5-under. He birdied the par 5 17th, before wrapping the round with a bogey on the final hole. 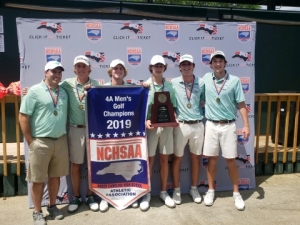 Myers Park overcame a two-shot overnight deficit to edge New Bern in the team championship. The Mustangs posted a combined 28-over, 305, on their way to the school’s first Men’s Golf team title since 1956. The Mustangs were led by Cole Chambers who carded a 3-over, 75, in the final round to go with his even-par effort on day one to finish at 3-over, 147 in a tie for sixth. Teammate Luke Hackworth was just one shot behind him with a 4-over, 148, for ninth place. Pearse Lucas finished in a tie for 13thto help the Mustang cause with his 6-over, 150, while Ben Morehead finished in a tie for 40that 15-over for the tournament.

In the 4A Championship, Broughton’s Peter Fountian rolled to a three-under, 69, on his way to a one-shot lead over New Bern’s Randall Hudson. Fountian carded six birdies in the round, including three consecutive with birdies on the sixth, seventh and eighth holes. Hudson helped lead New Bern to the team lead after day one, as the Bears hold a two-shot advantage over Myers Park. The Bears combined to post an 11-over total through 18 holes, with Hudson, Casey Osiecki, Jack Towarnicky and Caleb Kimbrough all firing sub-80 rounds. With Myers Park just two shots behind, the Mustangs lead a pack of six teams that are within ten shots of the combined lead as the teams prepare for the second and final round tomorrow.