CHAPEL HILL— Zahra Bichara from Mountain Island Charter and Jake Justice Polk County High School have been named recipients of the NCHSAA Performance of the Week awards. Each week two athletes in North Carolina High School Athletic Association competition are selected for this award from nominations received from media and school administrators. 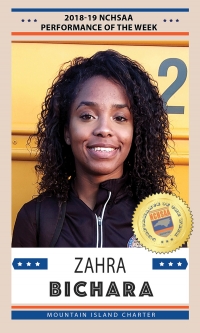 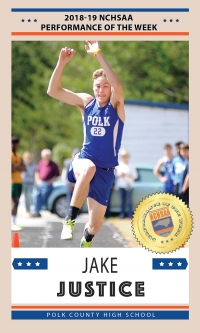 Justice, a senior on the Polk County men’s track team, scored 33 of Polk County 138 points in the Times-News Invitational Track meet. Justice, the defending 1A state champion in the pole vault, won the event and set a new school record by clearing 15’ 0”. He also won the long jump by over a foot with a 21’ 8” performance. He competed in the triple jump for the first time this season, finishing in second and also ran the 300 meter hurdles for the first time, posting a time of 44.82 seconds, which was fourth in the meet.