WINSTON-SALEM, NC – The North Carolina High School Athletic Association (NCHSAA) 4A Indoor Track and Field Championships at the JDL FastTrack were tightly contested as seven all classification meet records went down. The Southeast Raleigh men’s and women’s teams swept the team competitions, holding on to narrow margins in each team race to claim the state championships. 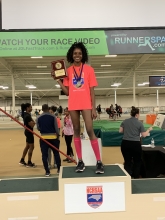 Morgan Smalls from Panther Creek was the star of the 4A Women’s Championship Meet, winning three individual field events and setting new state meet records in every one of those disciplines on her way to Most Valuable Performer honors. Smalls smashed the state record in the high jump, becoming the first female to clear 6’0” in the state indoor meet. She cleared 6’1” breaking the record of 5’10” held by Adriane Sims from Douglas Byrd and Patience Coleman from Southern Durham. Smalls also set a new record in the Triple Jump spanning a distance of 41’09.75” and besting the record of 40’11.5” held by Pinecrest’s Twyla Smith from 1995. For her third state record, Smalls jumped 19’11.25” in the Long Jump, exceeding the record of 19’7” set by Apex’s Sydnei Murphy in 2015. 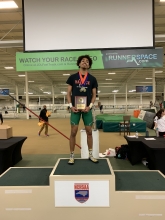 Southeast Raleigh’s Eric Haddock was the Most Valuable Performer, winning a pair of field events and standing on top of the podium with his victorious 4 X 200 Meter Relay team as he helped the Bulldogs to the State Championship. Haddock set a new all classification meet record in the Triple Jump striding 49’10.25” and besting the record set by Greg Yeldell from North Rowan back in 1998 when he jumped 49’10”. Haddock also claimed the Long Jump crown, leaping 24’05.50” to win the event.

The NCHSAA is committed to promoting good sportsmanship at all of our events and has partnered with North Carolina Farm Bureau to give two Sportsmanship Awards at each of our Championship Events. The winners of the NC Farm Bureau Sportsmanship Awards in the 4A Women’s Meet were Susanna Truitt from Panther Creek and Kyna Robinson from Southeast Raleigh. The winners for the 4A Men’s Meet were Eric Haddock from Southeast Raleigh and Anton Idhammar from Cary. 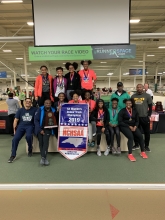 Sierra Fletcher from Southeast Raleigh dueled toe-to-toe with meet MVP Smalls as the Bulldogs star won top honors in a pair of individual events and stepped to the top of the podium in a relay as well. Fletcher claimed the 55 Meter Hurdles in a time of 8.04 seconds before earning the victory in the 300 Meter Dash in 39.49. She also ran the lead leg of the victorious 4 X 200 Relay team, combining with Jahzara Hart, Ani Judd and Kyna Robinson to take the title in 1:40.01.

In addition to the three new state meet records set by Panther Creek’s Morgan Smalls, West Forsyth’s Lindsay Absher set a new state meet record in the Pole Vault. Absher flew over the bar at 13’06.00” to beat the mark set by Weddington’s Riley Felts in 2018 when she cleared 12’07.5”. 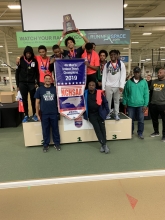 The Southeast Raleigh men completed the team title sweep, holding off Cary by a 55-51 count on their way to the program’s fourth team state championship in Indoor Track and their first since 2010. Millbrook finished in third position with 40 team points.

Meet MVP Eric Haddock led the way for the Bulldogs, who claimed victory in two of the meet’s three relay events. Haddock teamed with Romell McRae, Christian Ruffin and Brian Williams to rip through the 4 X 200 Relay in 1:27.87 and set a new state meet record. Their performance knocked off the previous record set by the Weddington quartet of Doug Dracon, Mark Conner, Denison Livingston and Emerson Douds in 2018 when they clocked 1:29.46. The Bulldogs also won the 4 X 400 Relay as Ruffin, McRae, and Williams partnered with Noah Larios to clock in at 3:25.94 to claim the event.

Ladale Gambrell from Broughton set a new state meet record in the Shot Put (Wheelchair) event by tossing a 16’06.00” performance and eclipsing his own record set a year ago when he threw a 16’02” distance. Gambrell also set a new 4A meet record in the 55 Meter Dash (Wheelchair) with a time of 14.71 seconds breaking the 4A record set by Ragsdale’s Christopher Coke back in 2017 when he raced to a 20.45 second time.