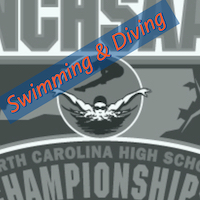 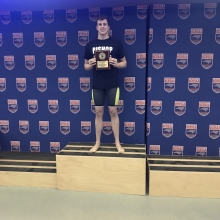 Thomas Hamlet from Bishop McGuinness grabbed the Most Outstanding Performer award on the men’s side, winning a pair of individual events. Hamlet set a new state meet record in the 100 Backstroke touching in 47.82 seconds. His time topped the mark set earlier this week by Athens Drive’s David Wahlen when he raced to a 48.44 in the preliminaries of the 4A meet on Thursday. Hamlet also topped the podium in the 100 Butterfly with a time of 48.80 seconds. 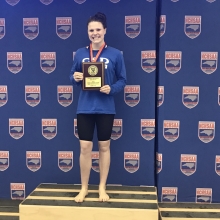 Emme Nelson from Community School of Davidson was the Most Outstanding Performer on the women’s side. Nelson set a new 1A/2A Classification meet record in the 200 Individual Medley by powering her way to a time of 2:00.70. That time bested the time she set last year of 2:02.01. Nelson also brought home the top spot in the 100 Breaststroke as she finished the event in 1:02.58. 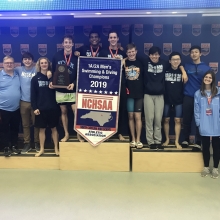 The Unicorns from the North Carolina School of Science & Math (NCSSM) won the program’s third team title, holding off Pine Lake Prep. It was the first title for an NCSSM men’s team since 2014.

The Unicorns collected wins in two of the meet’s three relay events to bolster their lead. Emile Charles, Jason Li, Andrew Eberhardt and George Heidkamp collaborated on a 1:28.25 performance in the 200 Freestyle Relay for the first victory. Charles and Heidkamp then teamed with Matthew Congiusta and Jack Healy on the 400 Freestyle Relay, posting a time of 3:13.79 as they cruised to victory.

In addition to the record-shattering 100 Backstroke time set by meet M.O.P. Hamlet, Ross Dant from Newton-Conover slashed the state meet record in the 500 Freestyle. Dant powered his way to a 4:18.70 time on his way to the top of the medal stand and into the record books with a new state meet record. Dant’s time bested the mark set by Jack Walker from Myers Park on Thursday in the 4A meet of 4:20.67, which had been a near five-second improvement on the previous state meet record in the event which had been held by Enloe’s Charlie Houchin since 2006 when he touched in 4:25.52.

Will Barker from Croatan found himself on top of the podium twice, once as the champion of the 100 Freestyle with a time of 46.31. His other trip to the top of the medal stand came as a member of the 200 Medley Relay team, as he swam the opening Backstroke leg while combining with Jack McCabe, Matthew McCray and Colby Loveless to touch in 1:36.83 and secure the event.

Baylor Nelson from Community School of Davidson also broke a 1A/2A Classification meet record in the 200 Individual Medley. Nelson brought home the win in 1:50.59 and out-touching the previous mark of 1:52.27 set by Mount Pleasant’s Danny Dilks in 2016. 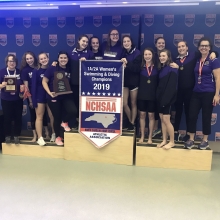 The Carrboro women swept all three relays as they ran away from second place Lake Norman Charter. The victories brought the Jaguars their first team state championship in Women’s program history.

The Jaguars opened the meet with a fantastic swim in the 200 Medley Relay as Kate Hegland, Audrey Cosley, Lindy Bilden and Anneliese Merry combined on a time of 1:47.24 to pick up the victory. Then in the 200 Freestyle Relay, Hegland, Bilden, Paloma Baca and Emily Carpenter wrapped up the title in 1:38.01. The Jags capped off the night with Carpenter, Baca and Merry swimming with Audrey Costley to touch in 3:33.65 for the 400 Freestyle Relay win.

Hegland worked her way to the top of the medal stand for the third time on the evening as she won the 100 Backstroke. She posted a time of 56.68 seconds in the victory. In addition to meet M.O.P. Nelson, Pine Lake Prep’s Allyson Accordino won a pair of individual events. Accordino claimed victory in the 50 Freestyle and the 100 Freestyle, touching in 23.66 seconds in the 50 and 51.09 in the 100.