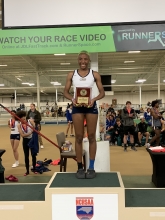 Kendall Jordan from Cummings was named the Most Valuable Performer of the women’s meet, as she found herself on the top of the podium in two events. She won the triple jump with a performance of 35’08.50”. Jordan also ran the lead leg of the 4 X 400 Meter Relay combining with Jydia Faucette, Britney Aguilar and Allysia Farrar to post a victorious time of 4:13.45. 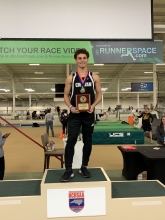 Brendan Hodge from Croatan won the Most Valuable Performer of the men’s meet and won top honors in three events. Hodge claimed the top of the podium in the 55 Meter Hurdles crossing in 7.67 seconds. He also was a part of two victorious relay teams. Hodge ran the lead leg of the victorious 4 X 200 Relay and the 4 X 400 Relay. 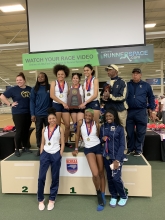 The Cummings women ran away with the women’s team title, outpacing Lexington 76-43. Croatan finished in third place with 33 points. The victory was Cumming’s tenth Indoor Track team championship in the program’s history.

Allysia Farrar captured the 55 Meter Dash crown for Cummings as she crossed in 7.17 seconds. Later she and Jordan paired with Aguilar and Faucette to win the 4 X 400 Relay in 4:13.45 blasting their way past second-place Croatan who crossed in 4:16.68 with Maleia Smith, Reese Hogan, Makenna DeLuca and Kaleigh Hanson combining for the Cougar relay squad.

Farrar was also a winner in the 300 Meter Dash, sprinting to a time of 40.50 seconds. Meet M.V.P. Kendall Jordan took the Triple Jump for Cummings and teammate Jydia Faucette claimed the long jump with a distance of 17’03.00”.

Lexington was led by Alyssa Thompson Rowe who claimed victory in the 55 Meter Hurdles with a time of 8.18 seconds. She then led off the 4 X 200 Relay team, working with Ziavia Calvin, Ny’Lasia Brown, and Taylor Bennett to win the event with a time of 1:47.91. 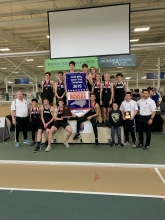 Brendon Hodge was the star for Croatan, earning Most Valuable Performer honors, as he won the 55 Meter Hurdles and was a part of both of Croatan’s winning relays the 4 X 200 and 4 X 400.

David Wallis also appeared on top of the podium three times for the Cougars. Wallis won the 55 Meter Dash with a time of 6.60 seconds. Hodge and Wallis combined with Travis Garner-McGraw and Noah Bibus to win the 4 X 200 Relay in 1:33.55. Then Hodge Wallis and Bibus teamed with Thomas McCabe to win the 4 X 400 Relay in 3:30.58.

There were a pair of 1A/2A Classification meet records set in the Championships. Jason Thomson from North Lincoln set a new record in the 1600 meter run as he crossed in 4:21.11. His mark bested the record set in 2018 by Forbush’s Dakota Mendenhall of 4:25.45. Later in the meet, Surry Central’s Erick Ramirez-Ramos toppled the 3200 Meter Run 1A/2A Classification record when he finished in 9:31.89. Ramirez-Ramos bested the mark set by Mitchell’s Zack Boone in 2015 when he finished in 9:35.19.