WINSTON-SALEM, NC – The North Carolina High School Athletic Association (NCHSAA) annual 3A Indoor Track & Field Championships saw some familiar faces and programs on top of the podium at the JDL FastTrack in Winston-Salem. The Cuthbertson women’s team ran away with their third straight 3A team title while the Weddington men captured back-to-back team championships.

Kyle Durham from Weddington claimed the meet’s Most Valuable Performer Award, capturing the top of the podium in two individual events and the 1600 Meter Relay. Durham set a new all-classification meet record in the 1000 Meter Run, finishing in 2:28.85 and breaking the record set by East Forsyth’s Dylan Ferris in 2008 of 2:29.03. Durham also won the 1600 Meter Run, finishing in a time of 4:20.90 before leading off the victorious 4 X 400 Meter Relay team where he combined with Jake Toomey,, Jackson O’Hara and Emerson Douds to post the top time of 3:25.53. 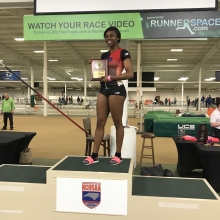 Alexis Patterson from Parkland was the Most Valuable Performer on the women’s side, winning three events including the 4 X 200 Relay. Patterson ripped through the 55 Meter Hurdles in 8.03 seconds to claim the top spot before sprinting to a victorious 7.02 second time in the 55 Meter Dash. She ran the second leg of the 4 X 200 Meter Relay team working with Ija Mumford, Del’Nique Penn and Diamond Lyerly to post a time of 1:41.95.

The NCHSAA is committed to promoting good sportsmanship at all of our events and has partnered with the North Carolina Farm Bureau to recognize two individuals who have exhibited excellent sportsmanship throughout the year at each of our Championships. The NC Farm Bureau Sportsmanship Award Winners for the 3A Men’s Meet were Jackson O’Hara from Weddington and Trevor Grant from Cuthbertson. The Sportsmanship Award Winners for the 3A Women’s Meet were Netanya Lineras from Cuthbertson and Alexis Patterson from Parkland. 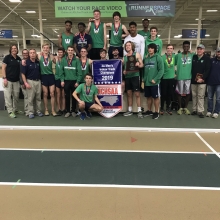 The Weddington Warriors won back-to-back titles in Men’s Indoor Track as they earned their third crown all-time in the sport. The Warriors rushed by cross-county rivals Cuthbertson by a 99-56 count in the meet. Southwest Guilford finished in third with 40 points.

Weddington runners won two of the three relay events in the Championship. Krystopher Durham, Stephen Larson, Jake Toomey and Will Mazur rolled to the title in the 4 X 800 Relay with a time of 8:09.68. The result paired nicely with the Warriors victory in the 4 X 400 Relay to give the team a comfortable cushion in the team standings. Emerson Douds sprinted to the 300 Meter Dash victory for Weddington, posting a time of 34.53 seconds for one of his two trips to the top of the medal stand.

Jaylen Wright from Sotuhern Durham tied the 3A meet record in the 55 Meter Dash with a time of 6.35 seconds. His time equaled the time of Kadarius Lotharp from Sun Valley who set the mark back in 2016. Second place Cuthbertson’s lone event win came in the 4 X 200 Relay where Brandon Black, Christian Phelps, Ashton Spangler and Aidan McNally combined to cross in 1:30.13. 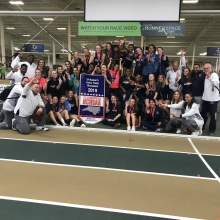 Nothing would stop the Cuthbertson Cavaliers from their third consecutive team crown as they bested second place Parkland by a 102-76 count. Weddington claimed third place in the meet with 50 points on the day.

The Cavaliers spread the success around the team with only Leah Helms appearing on top of the podium in more than one event. Helms anchored the victorious 4 X 800 Relay team, teaming with Gabriella Castro, Kaitlyn St. Hilaire and Madeline Hill to cross in 9:34.34 for the win. Helms was also a winner in the 1600 Meter Run, breaking the line in 5:11.05.

Netanya Linares earned Cuthbertson another victory, clearing 5’ 04” in the High Jump. Lainie Baumgardner was also successful in the field events for the Cavaliers as she won the Pole Vault with a clearance of 11’ 00”.

Other than the meet Most Outstanding Performer, Alexis Patterson, Parkland only had one other individual that earned a top spot in more than one event. Ija Mumford won the Long Jump with a performance of 18’ 05.75”. She was also on the 4 X 200 Relay team with Patterson, Penn and Lyerly that topped the podium.