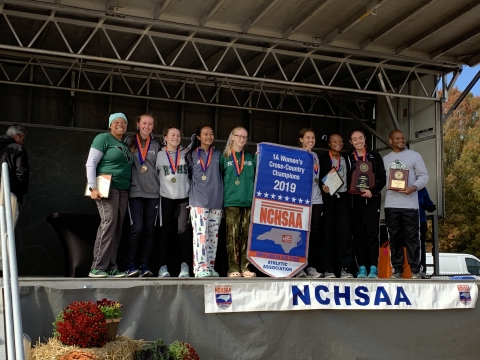 KERNERSVILLE, NC – Abigail Hemric from North Stokes won her second consecutive NCHSAA 1A Women’s Cross Country Individual State Championship. The senior edged Highland Tech sophomore, Lauren Tolbert, for the title as Hemric broke the tape in 19:19.17 ahead of Tolbert’s 19:21.61. Hemric claimed North Stokes’ only individual state championship in Women’s Cross Country a season ago and added to her trophy case with the victory.

Junior McCarty Hudson led Research Triangle to the program’s first team State Championship in Women’s Cross Country. She finished the course in 19:19.17, third overall, as teammates Caroline Foley and Victoria Swepson crossed just behind her in fifth and sixth respectively. Lillian Scott finished 31st and Sarah Villaruel crossed in 51st for the Raptors. The five combined for 67 points, besting second-place Community School of Davidson who plodded to 104 points. The Raptors runners averaged 20:44.11 in completing the course on the way to the title. 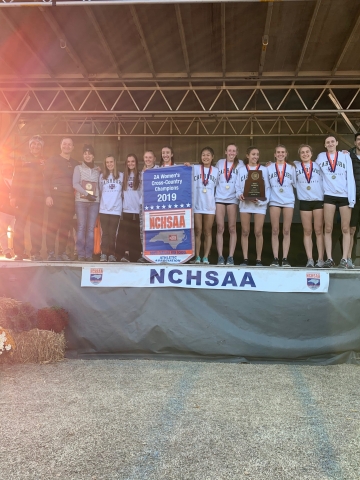 KERNERSVILLE, NC – North Lincoln runners finished first and second overall, but it wasn’t enough to overcome a strong performance from Carrboro for the team title. Junior Angie Allen brought home the individual State Championship for the Knights, crossing in 18:42.23 to win the school’s first title of any kind in Women’s Cross Country. Her teammate, senior Alyssa Galvin, came in second with a time of 18:53.91.

Carrboro was led by Louise Lounes, as the senior finished fifth overall with a time of 19:16.11 to lead the Jaguar runners. A Jaguars’ trio comprised of Hannah Prisser, Cora Van Ray and Madeline Ramsden finished eighth, ninth and tenth respectively. The group crossed in 19:29.74, 19:39.04 and 19:47.60 anchoring the Jags State Championship hopes. Senior Selia Lounes brought home a 14th overall finish for Carrboro, rounding out the scoring five runners with a time of 20:06.65.

Carrboro won their second consecutive 2A Women’s Cross Country State Championship, and the school’s seventh overall. The Jaguars averaged 19:39.82 while scoring 38 points to best North Lincoln who scored 58 points with an average time of 19:45.14.

Cuthbertson earned the school’s second consecutive Women’s Cross Country State Championship. The Cavaliers were led by Castro’s second place finish, but teammate Lillian Nasta was not far behind her in tenth overall at 18:40.49. Marissa Bosland, Leah Helms and Alyssa Preisano ran together for the Cavaliers, crossing in 19th, 20th, and 21st respectively. The trio posted times of 18:58.63, 18:56.30, and 18:58.63 as the crossed to round out the scoring five runners for the State Champions. Cuthbertson averaged 18:44.63, scoring 67 points to edge Chapel Hill who came in second with 84 points and a team average of 18:54.92. 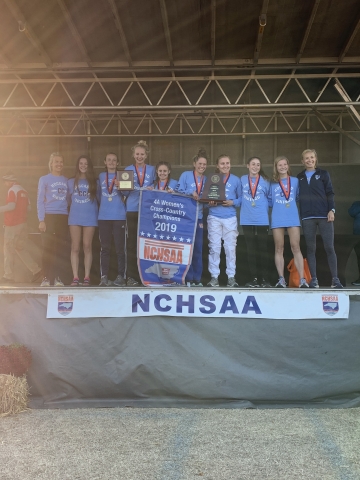 KERNERSVILLE, NC – Junior Carmen Alder from Pinecrest won her second consecutive individual State Championship, crossing well ahead of the field at Ivey Redmon Park. Alder crossed the tape in 17:58.84, more than 26 seconds ahead of Hough’s Lilly Walters, who came in second in 18:25.14. Alder was the first Patriots runner to win an Individual State Championship in Women’s Cross Country a season ago.

Hoggard won a close battle with West Forsyth for the team State Championship. The Vikings scored 87 points and averaged 19:25.97 while West Forsyth checked in with 108 points and a team average of 19:29.35. Hoggard was led by freshman Molly Parker who finished tenth overall in a time of 18:59.37. Fellow freshman Sarah Martin was just two spots behind her in 19:09.98. Sloane Fleming-Hickey was 19th overall with a time of 19:28.44 as the third Viking to cross the line, while teammate Shea Hoffacker ran through in 26th with a time of 19:42.27. Jenna Pellizzari, a Hoggard senior, rounded out the scoring positions for the Vikings with a 34thplace finish and a time of 19:49.78.