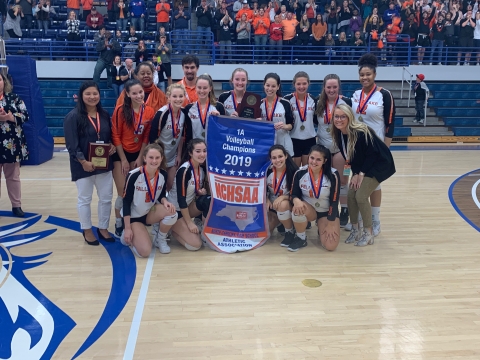 FAYETTEVILLE, NC – Macey Sammons was a dominant force in the attack for Falls Lake Academy as she led the Firebirds to their second straight NCHSAA 1A Volleyball State Championship with a clean sweep of East Surry. Sammons had 12 kills in the contest and added a solo block and block assist on her way to being named the match Most Valuable Player.

The Firebirds rolled off a 25-14 first set victory, rolling off a 12-4 run in the frame to stretch their lead out to a comfortable margin in the first.  Falls Lake cruised in the second set as well on the way to a 25-16 victory. East Surry fought hard in the third set, trying to stave off elimination, clawing their way within two of the Firebirds at 20-18. But Falls Lake ripped off five of the last seven points to close out the set and the match, 25-20. 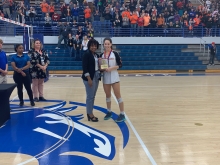 Austin Proctor distributed the ball well for Falls Lake, dishing out 40 assists in the match. Behind Sammons 12 kills, Falls Lake got a pair of nine kill performances from Morgan Newton and Jenelle Mason. Last year’s 1A Championship MVP, Chase Teal added seven kills and a block, while Hannah Collier chipped in seven kills and a pair of aces.

East Surry finished the season 29-3, the Cardinals were 10-0 in Northwest 1A Conference play, winning the league championship. The Cardinals captured the program’s second Western Regional Championship, making their first State Championship appearance since 2014.

Falls Lake Academy wrapped up the season 27-3, they were 13-1 in the North Central Athletic 1A Conference where they were league champions. The Firebirds won the Eastern Regional for the second time in program history and the second straight year. They captured the school’s second all-time State Championship in any sport. 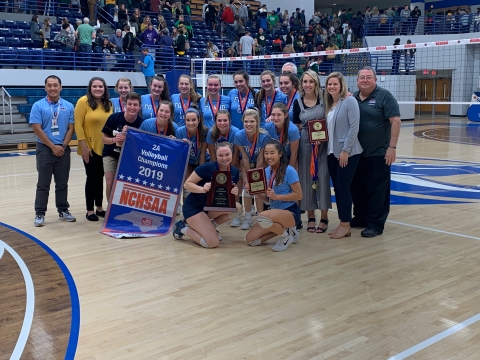 FAYETTEVILLE, NC – Fred T. Foard won the school’s seventh State Championship in Volleyball, powering to a three-set sweep over Ayden-Grifton. The Tigers dominated each and every set, leaving no doubt as to whether or not they would maintain the program’s spotless record in State Championship Game appearances.

Ayden-Grifton did give a bit of resistance in the first set, managing to hang in the set in the early going at 9-6. Then Foard ripped off a long run to build a cushion and win the first set in relatively easy fashion, 25-15. The second and third sets were fairly similar to the end of the first set, with the Tigers never trailing. They claimed the second set 25-12 and the decisive third set 25-11. 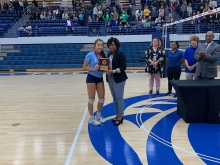 Michelle Thao was the Most Valuable Player of the Match. She was credited with five kills and 12 digs in the contest. Dara Schaffer led the Tigers with 13 kills and a pair of aces. Megan Dorsey also kicked in 11 kills.

Ayden-Grifton’s attack was primarily funneled through two players. Emily Dykes had eight kills while Alexis Bryant had six. Ultimately, service errors proved just too much for the Chargers to overcome in the match.

Ayden-Grifton finished the season 22-6, the Chargers were 12-0 in the Eastern Carolina 2A Conference where they were the champions. The team won the Eastern Regional Championship for the first time in program history to reach the school’s first State Championship Game in Volleyball.

Fred T. Foard completed the year 33-1, the Tigers were 14-0 in the Northwestern Foothills 2A Conference claiming the league title. Foard won their seventh Western Regional Championship, appearing in the State Championship Game for the seventh time. The Tigers captured the school’s first Volleyball title since 2005. 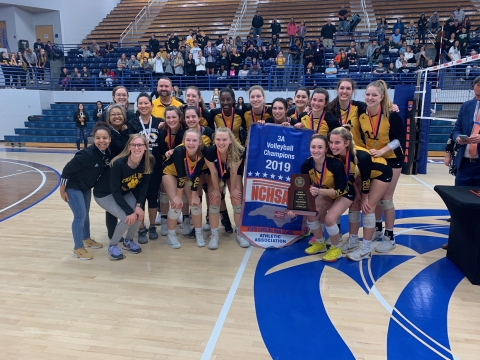 FAYETTEVILLE, NC - West Henderson ripped off a first set win, but Chapel Hill dominated the next three sets on their way to a four-set State Championship victory at Fayetteville State’s Capel Arena. The Tigers and Falcons battled hard in the opening set, a back-and-forth affair that West Henderson nabbed 28-26.

Chapel Hill responded with a 25-20 set two win followed by a tightly played 25-23 third set that went to the Tigers. The Tigers blew away the Falcons in the fourth set, leaving no suspense for the final frame, hoisting the school’s third Volleyball State Championship trophy with a 25-11 fourth set victory. 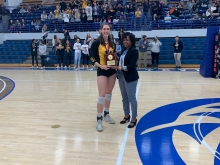 Kaya Merkler was dominant for Chapel Hill, scoring 20 kills in the win. She added 15 solo blocks and a pair of aces in the match. She was named the 3A Most Valuable Player for her role in the victory. Sam Breschi also had an exceptional day for the Tigers, adding 36 assists in the contest. Courtney Zwikker had eight kills for the Tigers and a trio of players: Kaya Monrose, Julia Charney, and Taylor Knott, had six each.

West Henderson was led by Kinsley Morgan and Malia Moore who both had 9 kills in the match. Moore also contributed 19 assists to lead the Falcons while Addison Hichman chipped in 15 helpers.

Chapel Hill completed the year 28-1 with a 13-1 mark in Big 8 3A Conference play where they won the title. The Tigers won the Regional Championship for the sixth time in program history and won the school’s third Volleyball State Championship. The title was the Tigers first since a 4A Championship victory in 2003. 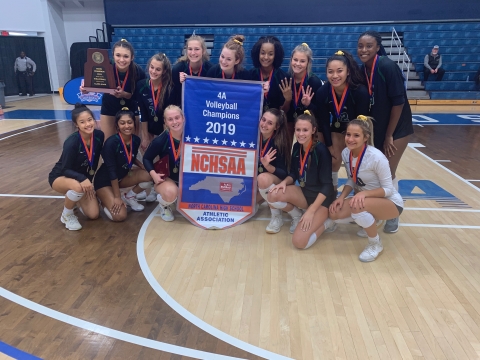 FAYETTEVILLE, NC – Green Hope had no trouble in the opening two sets against Ardrey Kell, eventually wrapping up the Falcons fourth straight State Championship in four sets thanks to stellar play from stand-out Sydney Dowler and company. Dowler won her state record fourth consecutive Most Valuable Player award in the 4A State Championship. Dowler had 43 assists, 2 kills, a pair of aces and five block assists in the award-winning performance.

Green Hope cruised in the first set, powering out to a 25-13 opening frame win. The Falcons followed that up with a 25-16 performance in the second set to put themselves on the precipice of a championship.

Just when it appeared that the Falcons were poised to roll of a straight-set victory, Ardrey Kell mustered a spirited late rally in the third set. The Knights trailed 18-15 in the third set before calling a timeout to regroup. After the breather, Ardrey Kell took seven the next 11 points to tie the score at 22 and eventually took the set 25-23, forcing a fourth set. 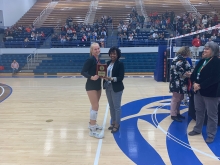 Ardrey Kell even led the fourth set 11-10, but in the end, the Falcon attack of Dowler and Alexis Engelbrecht proved too powerful, roaring out to a 17-13 lead before trading out points and capturing the final four points of a 25-20 fourth set.

Ardrey Kell was led by Alexis Shelton who compiled 15 kills and an ace in the match. She was aided by 31 assists from Mya Duggan and 10 kills by Sania McCoy.

Ardrey Kell finished the season 25-6. The Knights were 10-2 as the second-place team in the So. Meck 7 4A Conference. The Knights won the 4A Western Regional for the third time in school history and reached the State Finals for the first time since their only title in 2012.

Green Hope wrapped up the year 27-2, a perfect 14-0 in the Triangle 8 4A Conference where they were the league champions. The Falcons won the program’s fourth State Championship. The four-consecutive State Championships makes Green Hope the second school to accomplish the feat in open division or 4A in NCHSAA history. The Falcons joined Durham Jordan, who won four straight open classification or 4A titles from 1983 to 1987.