CHAPEL HILL, NC – The North Carolina High School Athletic Association (NCHSAA) is pleased to announce the eight-member group that will join the NCHSAA Hall of Fame in the Class of 2020. This year’s class includes individuals who made tremendous impacts on their communities through coaching and athletic administration. This year’s class is the 34th to join the Hall of Fame which is dedicated to honoring those who “have done the most for high school athletics in North Carolina” throughout their careers.

The Class of 2020 is: Donald Clark from Snow Hill, Barbara Foxx from Sanford, Henry Jones from Cherryville, Norvell Lee from Goldsboro, Fred McDaniel from Wade, Ron Parson from Reidsville, David Rothwell from Statesville and Milt Sherman from Greenville.

The class will be formally introduced at an Introduction and Luncheon on Wednesday, October 9, 2019, at the NCHSAA offices in Chapel Hill at 11:00 a.m. The Introduction Luncheon is not open to the public. The NCHSAA will stream the event live on the Association’s Facebook page. The Formal Induction Ceremony and Banquet for the Class of 2020 will be held on Saturday, April 18, 2020, at the Embassy Suites in Cary. The Banquet and Ceremony are open to the public. Tickets to the event are $50 per person and will go on sale in the coming weeks. 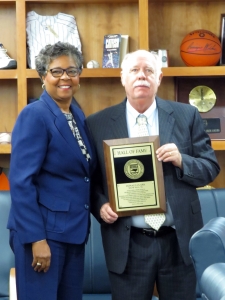 Donald Clark built the Greene Central High School Tennis program into a powerhouse during his 26-year career at the school. Clark built a reputation of excellence, and his teams demonstrated that throughout his career, helping him to be named Eastern Plains Conference Coach of the Year 22 times between his men’s and women’s duties. Clark led the Greene Central women’s tennis program to two state championships, 20 consecutive conference titles and compiled a record of 422 wins against just 178 losses. During this span, the women’s teams made 11 trips to the 2A State Finals between 1998 and 2012. His men’s teams from 1989 through 1998 won six conference championships and held a record of 167 wins to just 53 losses.

Clark has been an active member of the tennis community in eastern North Carolina, as a founding member and the only President of the North Carolina Tennis Coaches Association for twelve years. He was also a member of the Wilson Tennis Foundation Board of Directors from 1992 to 1994 and has served as a USTA Tournament Director from 1997 until the present. Now retired from public school and coaching at Arendell Parrott Academy in Kinston, Clark continues to serve the NCHSAA as the State Tournament Director for the 2A Men’s and Women’s Individual Tennis Championships annually. Due to his tremendous service, Clark was selected as a Charlie Adams Distinguished Service Award winner in 2011. He has also been selected for the George Whitfield Hall of Fame and was the NCTA High School Coach of the Year in 2006. 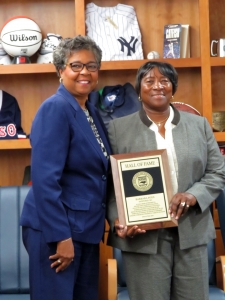 Barbara Foxx was an exceptional volleyball, women’s basketball and softball coach at Pinecrest High School in Southern Pines from 1978 until her retirement in 2017. During 38 seasons as the head volleyball coach, Foxx’s teams captured two state titles, one in 1988 and the other in 1992. She led the Patriots program to 726 wins in her tenure, putting her in the top 10 for head coaching wins in NCHSAA history. Foxx also led the women’s basketball team from 1993 until 2002.

Foxx served the NCHSAA as a member of the Association’s Board of Directors from 1995 until 1999, representing Region 4. She was selected as one of the NCHSAA’s 100 Coaches to remember during the NCHSAA’s Centennial Celebration in 2013. A proud alumna of Campbell University, she was a three-time varsity letter winner at the school. Upon her retirement from Pinecrest, the school named the auxiliary gymnasium in her honor in 2018. 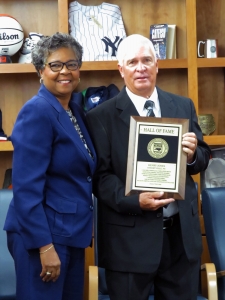 After graduating from Shelby High and Gardner Webb, Henry Jones began his teaching and coaching career in Gaston County’s Cherryville High School in 1973. Jones served as the school’s head coach in numerous sports including, basketball, football, and cross country during his tenure from 1973 until 2005 but made his most notable contributions in baseball. Jones led the Ironmen baseball program to six State Championships in three different decades (1980, 1982, 1992, 1993, 1998, & 2001) and a runner-up finish in 1997 while appearing in the post-season 24 out of 28 years.  His teams won conference championships 11 times while posting a career record of 542-207.

Jones was named Coach of the Year in the conference on eight different occasions and Gaston County Coach of the Year numerous times. He was selected as the 1982 Outstanding 2A Coach by the North Carolina Association of Broadcasters. He won the 1993 North Carolina Baseball Coaches Association Coach of the Year Award and was given a Meritorious Service Award by that group in 1997. He was the athletic director at Cherryville for over 25 years. In 1988, the NCHSAA honored Jones with the Region 6 award for Male Coach contributing the most to High School Athletics and he was selected as one of the NCHSAA’s 100 Coaches to Remember during the Association’s Centennial Celebration. He has been inducted into the Cherryville, North Carolina Baseball Coaches, Gaston County and Cleveland County Hall of Fames. 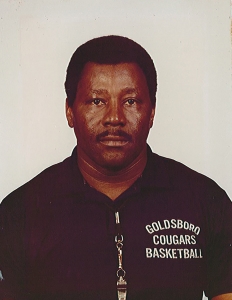 Norvell Lee was an outstanding basketball coach and athletic director at Goldsboro High School and several other schools before advancing to the collegiate ranks in 1994 at St. Augustine College. Lee served as a teacher and basketball coach from 1958 through 1969 at three different high schools, Swift Creek, Sampson and Dillard High Schools. His teams won seven conference championships during those years and finished as 1968 State Runners-up in the NCHSAC (North Carolina High School Athletic Conference), the Association that served African American High Schools during segregation.

In 1969, Lee joined the Goldsboro High School staff as an athletic director, teacher and basketball coach. His 26-year tenure at Goldsboro saw his teams compile a 455-133 record with 19 conference championships and a 4A State Runner-up finish in 1983. He coached the East team in the 1984 NC East-West All-Star game and received a lifetime achievement award from the NCHSAA. He was inducted to the Goldsboro High School Hall of Fame as one of its charter members in 1987. He passed away suddenly in 1997 after completing his third season as head basketball coach at St. Augustine’s College in Raleigh, where he had been named CIAA Conference Coach of the Year and won the CIAA Tournament in 1997. The Gymnasium at Goldsboro High School is named in his honor. 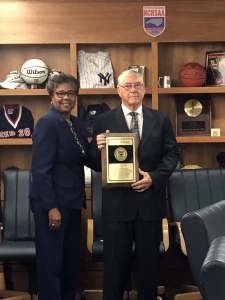 Fred McDaniel had a long and distinguished career as a coach, athletic administrator in the Fayetteville area from 1974 until his retirement in 2009. McDaniel began his career at Terry Sanford High School in 1974 where he served as the school’s head baseball and wrestling coaches while assisting in football. He led the Bulldog baseball team to their first conference championship and a state playoff berth in 1980. As a wrestling coach, he guided six students to top-four finishes in the individual state tournament, including one state champion. In 1988, McDaniel made the shift to an administrative role at Westover High School, serving as Assistant Principal and Athletic Director there until 1994, and then serving in the same role at Cape Fear High School from 1994 until 1999. During these years, McDaniel regularly hosted conference tournaments in wrestling, women’s basketball and volleyball.

He joined Cumberland County Schools Central Services staff as Director of Student Activities in 1999, serving in that role until 2009. He served as conference president for the Mid-South 4A from 1999 until 2004 while serving on Advisory Boards for the Southeastern Officials Association in football, volleyball, basketball, baseball, softball, soccer and wrestling. He served as the President of the NC Athletic Directors Association in 2008-2009 and became a Certified Master Athletic Administrator (CMAA) in 2003. Among many distinguished awards, notably McDaniel was selected as one of the “100 Administrators to Remember” during the NCHSAA Centennial Celebration, was the Region 4 Athletic Director of the Year for the NCHSAA in 1997, received the Outstanding Achievement Award in 2004 and was chosen as the State Award Winner in 2010 of the Dave Harris Athletic Director of the Year by the Association. He has previously been inducted in the NCADA, George Whitfield and the Fayetteville Sports Club Halls of Fame. 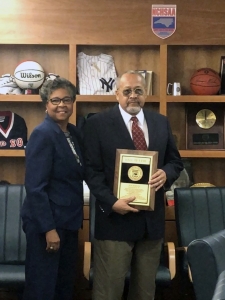 Ron Parson’s coaching career has spanned three NCHSAA member schools, three states and numerous championships, as Parson’s regularly is credited with building outstanding programs and leaving a legacy of success. He served as a men’s basketball coach 1975-2005 at Cummings and Hoke County High Schools, eventually making his way to Reidsville High School where his most notable accomplishments are found. Parson led the Rams to two state championships, one in 1994 and the other in 2003 while compiling a 405 win to 186 loss record in 21 years at the school.

Parson is a highly decorated coach, winning 13 conference championships and being named Conference Coach of the Year on 12 occasions. He was the Greensboro News & Record Coach of the Year in 1994 and 2003, while being named the Associated Press North Carolina Coach of the Year in 1994 season. During the 1994 season, he was also selected as the US Air Sportsman of the Year. In 1992, he served as the Head Coach of the North Carolina East/West All-Star Game. Parson was well respected among basketball coaches across the state, serving on the North Carolina Coaches Association Board of Directors and as the President of that organization in 2000. In the fall of 2015, Parson was inducted into the Randleman High School Hall of Fame. He concluded his coaching career in Virginia at George Washington High School in Danville, reaching the final four all four years of his tenure. 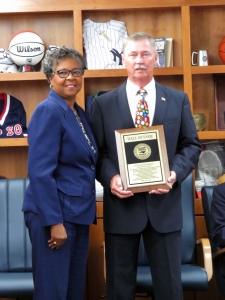 An outstanding wrestling coach and athletic administrator, David Rothwell served the NCHSAA and its student-athletes with distinction from 1972 until his retirement in 2012. Rothwell began his career in education as a teacher and coach at three different NCHSAA Schools from 1972 until 1992. He guided his Statesville team to the 1992 3A Wrestling State Championship. During that span, he served at Albemarle, Asheboro and Statesville High Schools before taking a position as Assistant Principal and Athletic Director at Statesville High School, a position he held from 1992 until 1997. After a four-year stint as Principal at East Iredell Elementary School, he took a position as the Athletic Director for Iredell-Statesville Schools in 2001, remaining in that position until his retirement in 2012.

Rothwell has received many awards from various organizations. He was the Mat News 3A Coach of the Year in 1992. In 1994 and again in 2007 he received the Proclamation of Achievement Award from the NCHSAA. The North Carolina Athletic Directors Association dubbed him the Region 7 Athletic Director of the Year in 2002 and selected him for induction in their Hall of Fame in 2014. He garnered the State Award of Merit from the NIAAA in 2008. In 2010, Rothwell was named the Region 7 recipient of the Charlie Adams Distinguished Service Award, selected for the National Wrestling Hall of Fame, and inducted into the Iredell County Sports Hall of Fame in 2019. 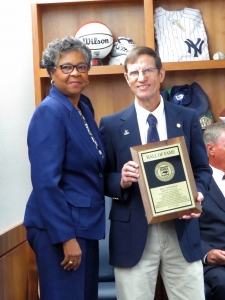 An outstanding coach for 30 years in the Greenville area, Milt Sherman built D.H. Conley’s wrestling program into a powerful force in North Carolina wrestling.  His team compiled a dual record of 470-114-5 during his tenure, making him 2nd all-time in North Carolina coaching wins at retirement.  Sherman had 43 All-State wrestlers including 14 state champions.  He coached 5 high school All-Americans including James Johnson who went on to win 3 national championships and coach the 2012 Olympic team.  His team won the 3A State Championship in 1995 and he was named the 3A Coach of the Year that season.  His teams finished as state runner-up in 1977, 1989, and 1990.  They claimed 10 Regional Championships and 16 Conference titles.