CHAPEL HILL— Jonna Strange from North Iredell High School and Cameron Brown from Person High School have been named recipients of the NCHSAA Performance of the Week awards. Each week two athletes in North Carolina High School Athletic Association competition are selected for this award from nominations received from media and school administrators. 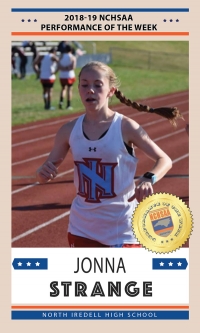 Strange, a junior from the North Iredell indoor track team, finished first at the Green and Gold Border Clash in the 3200 meter. Strange’s time of 10:37.84 is the fastest time in the indoor 3200 in the NCHSAA since Sarah Platek set the state meet record during the 2017 Indoor Track Championships. According to MileSplit, Strange’s time is the fastest 3200 meter indoor time this season in the NCHSAA. She also runs the 1600 meter, with a personal best of 5:09.82 that she set this year when she won the event at the Champion Fast Track High School Invitational earlier in January. 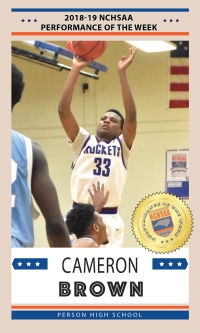 Brown, a senior on the Rockets men’s basketball team, helped the squad to wins over Western Alamance and Northern Guilford last week. Against Western Alamance he scored 21 points with 18 rebounds, seven assists, four steals and two blocks as the Rockets handed Western their first conference loss of the season. Then against Northern Guilford, Brown came up big again with 24 points, 12 rebounds, eight assists, two steals, and two blocks.