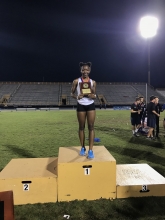 West Montgomery’s Araybian Lilly was the meet’s Most Outstanding Performer winning three individual events. Lilly claimed the three sprint events with a blazing 12.48 second time in the 100, a 25.73 seconds mark in the 200 and a speedy 57.06 seconds performance in the 400 meters.

Hobbton’s Lakelyn Bass tied a 1A Classification Meet Record in the pole vault as she cleared 11’ 00”. That tied the record set by North Stokes’ Tess Rogers in 2011. 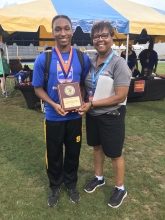 GREENSBORO, NC – The Wolverines of Polk County have been strong in track and field for many years, but this year’s men’s team accomplished something none of their predecessors have been able to, win a team state championship. Jake Justice led the Polk County men as he was the only individual to win an event for the team, claiming the pole vault by clearing 14’ 06”.

Josh Polk dominated the two shortest events of the meet, the 100 and 200 meter dash. The Hobbton runner crossed the line in 10.92 seconds in the 100 and blitzed through the 200 in 21.94 seconds. He was named the meet’s Most Outstanding Performer.

Polk County held off a strong challenge from John A. Holmes as the Aces got wins in the 300 meter hurdles and the 4 x 200 meter relay. Aaron Pryce won the 300 meter hurdles posting a time of 39.81 seconds. He also led off the victorious 4 x 200 meter relay squad, combining with Zakeem Brooks, Xavius Capehart and Eric Phelps to complete the 800 meter distance in 1:31.18. 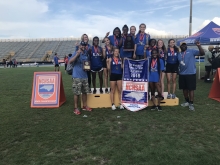 GREENSBORO, NC – Mariah Howlett from Lake Norman Charter won two individual events, the 1600 and the 3200 meter runs, to lead Lake Norman Charter to the first ever team state championship in women’s track and field program history. The Knights also got a win in the 4 X 100 meter relay as the team of Chioma Asiebunam, Jordyn Earl, Kiya Means and Destiny Benson combined to cross in :49.56. 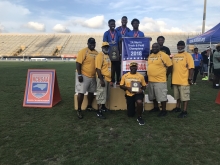 GREENSBORO, NC – Forest Hills got a pair of individual wins from Scott McClendon in the long jump and the triple jump as well as wins in two of the four relay events to sneak past Croatan 57-53 and win the school’s first Men’s Track and Field State Championship. McClendon was named the meet's Most Outstanding Performer.

McClendon jumped 22’ 5” on his way to victory in the long jump before clearing 45’ 4.25” in the triple jump to win the event. Forest Hills teams won the 4 x 100 meter relay as well as the 4 x 200 meter relay. Jadus Davis, Jaleel McLaughlin, Quentin Huntley and McClendon combined to cross in 42.20 seconds to win the 400 meter relay. Davis, Huntley, Keeshawn Tyson and McLaughlin teamed up to finish the 800 meter relay in 1:28.29 and win.

3A Women’s Championship: Hillside wins the final relay to slip past Parkland 62-61 in a record-slashing meet 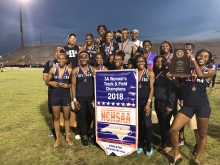 GREENSBORO, NC – In a meet that saw five classification meet records trimmed down, the Hillside 4 x 400 meter relay team earned a win in the final relay of the night to edge Parkland 62-61 in the race for a team championship. The win gave the Hornets their eighth women’s team state championship. The Hornet quartet of Emmaya Waters, Gabrielle Ryan, Ashlan Bowdry and Jessica Wright blistered the 1600 meter distance to post a new meet record for the 3A classification of 3:52.23.

The Hornet’s relay performance broke a record set in 2009 by the Dudley team of Shaquilla Gibson, Tyler Brockington, Natalie Nelson and Keneisha Williams when they posted 3:55.47. Hillside also got a 3A meet record performance from Kayla Beasley who won the shot put with a record-breaking throw of 43’ 7.5”. Wright claimed victory for the Hornets in the 300 meter hurdles, finishing the course in 44.50 seconds for the win.

Parkland was led by Alexis Patterson who earned the top spot in the 100 and 200 meter dash events. Patterson took down the 100 meters in 11.78 seconds before toppling the 200 in 24.39. She also anchored the victorious 4 x 200 meter relay team for the Mustangs, teaming with Shamara Tolliver, Diamond Lyerly and Del’Nique Penn to win the event in 1:38.96. Patterson was named the meet’s Most Outstanding Performer.

The Mustangs also earned a victory in the 4 x 100 meter relay. Jadai Stevenson-Damon, Tolliver, Amari Simington and Penn combined to post a time of 47.28 seconds to edge out Southwest Guilford. 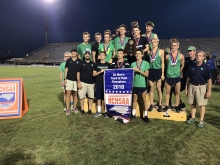 GREENSBORO, NC – The Weddington Warriors claimed the school’s second straight 3A Men’s Track and Field team title with a pair of event wins on the day. Kyle Durham was the lone individual winner for the Warriors as he won the 800 meters in 1:54.63. The Warriors also flew to a winning 7:57.21 in the 4 x 800 relay with Will Mazur, Stephen Larson, Jackson O’Hara and Durham combining to outpace second place Mount Tabor by almost 5.5 seconds.

Williams relay teams earned a pair of victories in the shorter relays. Corey Johnson, Solomon Womble, Quincy Dabney and Darius Turner raced to a win in the 4 x 100 relay with a time of 41.87 seconds. Johnson, Dabney, David Miles and Turner sprinted to the 4 x 200 relay win as well, crossing the line in 1:26.53.

South Iredell’s Cory Gaither was the lone male to set a new 3A Classification Meet Record in an event during the day. Gaither cruised to a new record in the 300 meter hurdles, finishing in 37.18 seconds. That mark snapped the record set by Scott Grell from Western Alamance in 1987 when Grell posted 37.80 seconds. 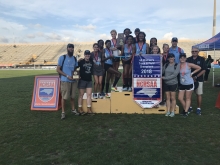 GREENSBORO, NC – Panther Creek captured the school’s first team title in Women’s Track and Field behind three individual event wins from Morgan Smalls in the jumping events. Smalls set a new state record in the high jump clearing 6’ 0.25”, breaking the record of Adrianne Sims from Douglas Byrd who cleared 6’ 0” in 1997.

Smalls claimed victory in the long jump as well as she cleared 19’ 3.5” before earning a win in the triple jump with a distance of 40’ 7.5”. Smalls was named the meet’s Most Outstanding Performer.

Maya Singletary from Hoke County set a new state record in the 400 meter dash with her time of 53.42 seconds. Her performance snapped the old record of 53.50 seconds set by McKinley McNeill from Parkland in 2016. 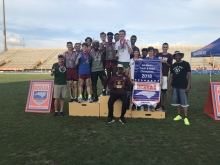 GREENSBORO, NC – The Green Hope Falcons got a pair of individual event wins from Ian Delgado in the 800 and 1600 meter runs as well as a 3200 meter relay championship on their way to the program’s first team state title. The Falcon team of Daniel Vo, Matthew Kehn, Michael Biddle and Sean Petersen combined to post a time of 7:54.09 to win the 4 x 800 relay for Green Hope.

Garner’s Randolph Ross was named the meet’s Most Outstanding Performer. He was the champion of the 400 meter dash with a time of 47.58 seconds. He finished third in the 200 meter dash crossing in 21.80 seconds behind the winner, Cameron Rose from Hickory Ridge and second-place Ronnell McRae from Southeast Raleigh who posted 21.74 seconds and 21.79 seconds respectively.

Cary finished in second place in the meet thanks to a first-place finish in the 4 x 400 meter relay. The Imps saw Brian Stevenson, Kayin Fails, Tre’ Thomas and Anthony Robinson combine to break the line in 3:20.16 over half of a second faster than the second place team from Grimsley of Jakel Chalmers, Lance McMillan, Justin Santiago and Anthony Morgan.