CHAPEL HILL— Morgan Smalls from Panther Creek High School and Tyler Harris from Polk County High School have been named recipients of the NCHSAA Performance of the Week awards.

Each week two athletes in North Carolina High School Athletic Association competition are selected for this award from nominations received from media and school administrators. 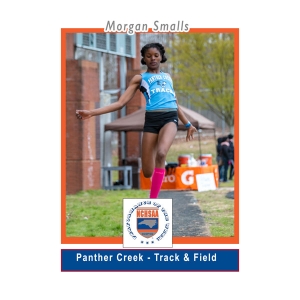 malls, a sophomore on the Catamount’s Track and Field squad, led the Catamounts to a team title in the Wake County Championships. She finished first in the long jump, the triple jump and the high jump before anchoring the victorious 4 x 200 Relay team. Her high jump is currently tied for first in the 4A Classification of the state. She holds the top spot currently in 4A for the triple jump and is part of the top performance in the state for this season for the 4 x 200 relay team. 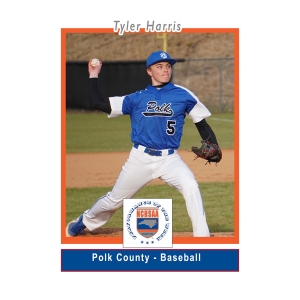 Harris, a senior on the baseball team, helped Polk County to a 3-0 week with a pair of wins over Owen, and a win over Rosman. He slashed 2 for 3 with a home run and a pair of RBI’s in a 9-3 win over Rosman. Later he went 3 for 4 with a grand slam and seven RBI’s in a 16-0 win over Owen. He closed out the week on the mound against Owen, going 5 and 2/3 innings with 9 strikeouts, while only allowing three hits and a single run in an 11-1 victory. He also went 1 for 3 at the plate with 2 RBI’s in the game.

Weekly recipients will be recognized on the NCHSAA Website and social media pages. They will also be honored at a banquet for all recipients from this year in late April. The deadline for nominations is each Monday at 5 p.m through the online form that can be found here.