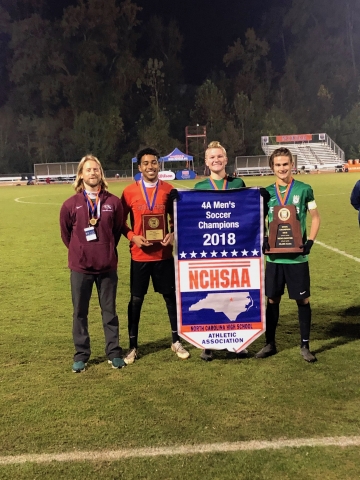 RALEIGH – The Green Hope Falcons netted two second half goals, both by Sam Durand, and ran away to a 4-1 victory over Myers Park for their fourth men’s soccer State Championship in school history.

In the early going, both teams had opportunites, but were unable to cash in. The Falcons saw a header by Josh Mohess sail wide off a corner kick in the 13th minute. Then in the 14thminute, Myers Park lofted a ball up to Daniel Watts in the center of the box. Watts cooly too the ball down off his chest and turn towards goal, ripping a shot right at the keeper which was held out to keep the game scoreless.

The Falcons broke the ice in the 20th minute as Daniel Cho ran onto a ball in the edge of the penalty area. With the keeper running on, Cho took a step right and slipped a pass just in front of the sprawling keeper to Dylan Enseling who slotted the ball in the net for the 1-0 lead.

Watts created another two chance for Myers Park in the 33rd minute as he rang a shot low off the left post, bouncing out to teammate Charles Pringle. Pringle’s put back attempt was off the mark as well, and the Falcons held on to their 1-0 lead at the half.

Just two minutes into the second half, Sam Cooper shook his Mustang defender, splitting a pair of them into the box. He let loose a right-footed shot that was knocked away by the keeper, but fell right to Sam Durand. Durand chipped in the rebound for his first of two markers on the night and a 2-0 Green Hope lead.

Durand got his second of the night in the 51st minute after the Falcons worked some fantastical one and two-touch passes up the left side, eventually resting with Enseling about 45 yards from goal. Enseling picked out Alex Penel making a run towards the left side from midfield, who then slipped a pass to Durand at the edge of the box. Durand slid the ball under the keeper in the left side of the net for a 3-0 lead. Durand was named the game’s Most Valuable Player.

Myers Park tried to claw back into the game with Daniel Watts picking up an unassisted goal in the 62nd minute to cut it to 3-1. However, the damage had been done with the Falcons three goals, and they added a fourth in the 73rd minute when Sam Cooper banged home a rebound chance following Daniel Cho’s shot off the post.

Myers Park finished the year 20-3, 11-2 in the Southwestern 4A Conference where they finished second behind Porter Ridge. The Mustangs reached the State Championship for the seventh time in school history.

Green Hope wrapped up the year 23-2-1, champions of the Triangle 6 4A Conference where they held a 9-1 record. The Falcons reached the State Championship game for the sixth time in school history, earning the school’s fourth championship. It was the first title for Green Hope in men’s soccer since 2016 when they defeated Providence 3-0. 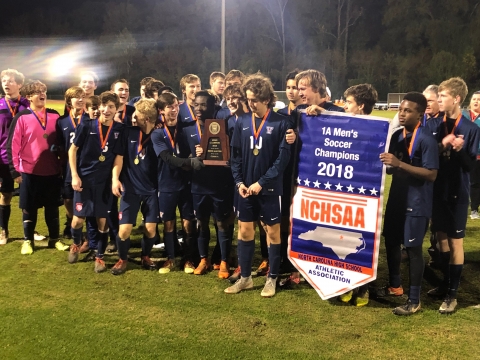 RALEIGH, NC – Voyager Academy and Community School of Davidson both entered the day looking for their first State Championships in Men’s Soccer, and after an incredibly even match, it was Cole Scarantino’s golden goal in sudden victory overtime that lifted the Vikings to their title, 2-1 in the 114th minute.

Community School of Davidson had the run of play in the first half, but neither team could find the back of the net. Isaac Haddock intercepted a clearance in the box and booted it on frame in the 13th minute, but it was saved by Jacob McGhinnis, one of his 12 on the day. Liam Timoney crept into the box from his defensive slot for CSD in the 26th minute, and a deflected ball found him but he pushed the shot just wide.

Perhaps the best chance for either side in the first half was when CSD’s Micah Chabeda got loose along the goal line in the penalty area and rifled a shot off the outstretched hands of McGhinnis and off the crossbar to carry the two sides to halftime scoreless.

The Spartans didn’t take long to break the ice in the second half as CSD won a corner which dropped into the middle of the box. The Vikings attempted to clear, but failed as the failed clear dropped to Haddock who deposited the loose ball into the back of the net making it 1-0.

Voyager began to turn the tide in the 57th minute as they earned a corner of their own, and it deflected down to the back post where Ben McQuaid poked it wide. Some shaky moments defending in the box three minutes later by CSD allowed Noah Wells to pick up a loose ball in the box on the goal line and his shot was handled by the keeper.

Then Scarantino chased down a long diagonal ball into the box in the 63rd minute, ripping the one-timer over the bar. Just three minutes later, Scarantino found himself on the end of a beautiful cross into the box by Mason Kosik. Kosik had deflected a clearance to himself, springing him into the clear with an opportunity to find Scarantino on the right side. Scarantino made no mistake, volleying the shot into net with his right boot tying the score at 1.

Community School of Davidson had several opportunities in the first overtime, particularly off of set pieces. In the 84th minute a corner kick dropped on the head of Haddock who pushed the shot wide. The best opportunity came when the Spartans won a free kick in the 98th minute 25 yards from goal. Haddock pouned the shot, dipping under the bar, but McGhinnis sprawled up to poke the ball high and over the bar, and out for another corner.

McGhinnis saved a header off the line on a corner opportunity in the sudden-victory overtime. Three minutes later, the keeper stood tall again poking a corner out and starting a counter attack for Voyager. Kosik launched a ball just outside the right edge of the Spartan box, and Scarantino ran onto the ball just ahead of the keeper, flicking it over his outstretched arms and into the net for the win. Scarantino was named the match Most Valuable Player for his pair of goals, including the game-winner.

Community School of Davidson finished the season 22-2-2, they were 14-0 as the champions of the PAC 7 1A. The Spartans reached the State Championship for the second time in school history.

Voyager Academy wrapped up the year 22-3-2, they were the champions of the North Central Athletic 1A Conference at 14-0. The Vikings won the schools first state championship in men’s soccer in their first championship appearance. 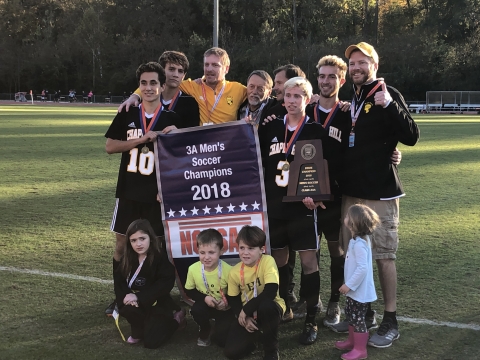 RALEIGH, NC – Chapel Hill won the school’s second straight State Championship in Men’s Soccer as they held off Marvin Ridge in a tightly contested match 1-0, winning the 3A Championship.

Chapel Hill outshot the Mavericks 6-3 on the day, but Marvin Ridge had the first big chance as Nick Jones sent a cross in along the ground all the way through the goal mouth in the 14th minute. That send Chapel Hill defenders scrambling in the box, eventually clearing the ball to safety. Two minutes later the Tigers, who held the majority of possession in the first half, sent a high, curling ball into the box that was ripped down by the keeper just in front of a Tiger attacker, keeping the game scoreless.

In the 20th minute, the Chapel Hill pressure paid off for the Tigers as a high cross came into the box, knocking off of three or four players before finding the head of Kalvin Matishack. Matishack cooly deposited the ball in the back of the net to lift the Tigers into the lead, 1-0, a lead they would never relinquish, as they moved on to the fifth state Championship in school history.

Matishack was the second straight defender to win the 3A Most Valuable Player honors, joining teammate Ryan Smith who won the honor a year ago. The Center Back played a critical role all afternoon, shutting down attacks in the center of the park by the Mavericks and of course had the game winning goal.

The Tigers had two more first half opportunities to put the match away, as a corner pinballed around the box in the 32nd minute, eventually dropping to the right foot of Tom Morioka who blistered a shot off the keeper and out of play. Six minutes later Morioka again played a huge role in setting up an attack, getting to the goal line and sliding a cross through the box all the way across goal to Gabo Tobin-Xet who pounded the ball off the crossbar and out.

Chapel Hill continued the pressure in the second half as Cobi Promislow had two shots on frame, knocking it off the keeper both times in the 44th minute. Marvin Ridge began to gain their footing in the 53rd minute when Jones volleyed a beautiful cross from Zenou Tchamwa. The shot skimmed low and along the ground right on, swallowed by the keeper as the score remained 1-0. The Tigers had the final good opportunity as Morioka headed one right and saved off the line from a cross sent in by Tobin-Xet.

Marvin Ridge wrapped up the season 21-4, 12-2 in the Southern Carolina 3A where they were second. The Mavericks made their fourth Championship appearance and their first since 2016.

Chapel Hill finished the season 21-3-1, they were 12-2 in the Big 8 3A where they finished second this year. The Tigers made their eighth appearance in an NCHSAA Men’s Soccer Championship, earning their fifth state championship in school history. 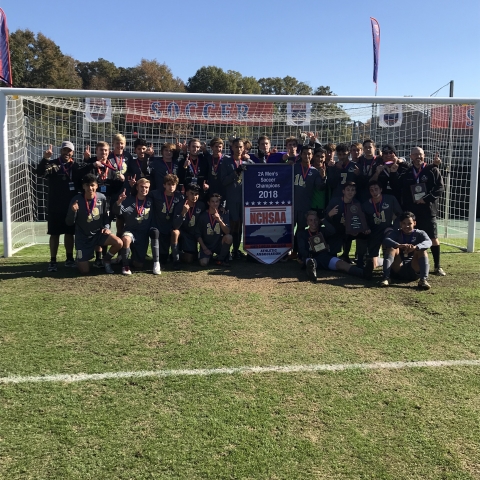 RALEIGH, NC – In the school’s first State Championship appearance in Men’s Soccer, the Clinton Dark Horses looked smooth and calm, despite falling behind in the second half against the defending 2A State Champions from Newton-Conover.

Clinton had the better of the possession in the first half, and had the first real scoring opportunity of the day when Jared Aguilar got in on the keeper one-on-one, but it was parried away in the 20th minute. Aguilar again got loose behind the Red Devil’s defense two minutes later, earning a corner kick which was headed just wide of the target.

After a scoreless first half, it was Newton-Conover that got on the board first. Dribbling along well outside the box on the left side, Jason Agreda stunned everyone when he turned loose a shot that skimmed low along the ground, finding the right side of the net in the 43rdminute to give the Red Devils a 1-0 lead.

After springing Aguilar on the first two Clinton opportunities and seeing his team fall behind, Parker Norris went to work for the Dark Horses. Clinton played a ball into the right side of the box and Peter Darden chipped it over the keeper, clanging it off the bar where it fell to the waiting Norris who pounded it into the net to tie the score at 1 with 22:58 to go.

Just over five minutes later, the Dark Horses earned a corner kick, one of their eight in the match, and Reid Taylor bent an out-swinging ball right onto the waiting right foot of Norris who promptly deposited it into the bottom right corner of the net through traffic to lift Clinton to a 2-1 lead in the 63rd minute. Norris was named the game’s MVP with the two goals.

Newton-Conover finished the season at 22-4-1, they were 12-1-1 in the South Fork 2A where they were the conference champions. The Red Devils appeared in the State Championship for the fourth time in school history and the second consecutive year.

Clinton wrapped up their campaign at 26-1-0 on the year, 11-1 in the East Central 2A where they were the Champions. The Dark Horses advanced to the State Championship for the first time with a 0-0 (4-2 PK) decision over the defending 2A Eastern Regional Champions from First Flight. Clinton won the school’s first men’s soccer State Championship.