NCHSAA Athletes Of The Year Named At Annual Meeting 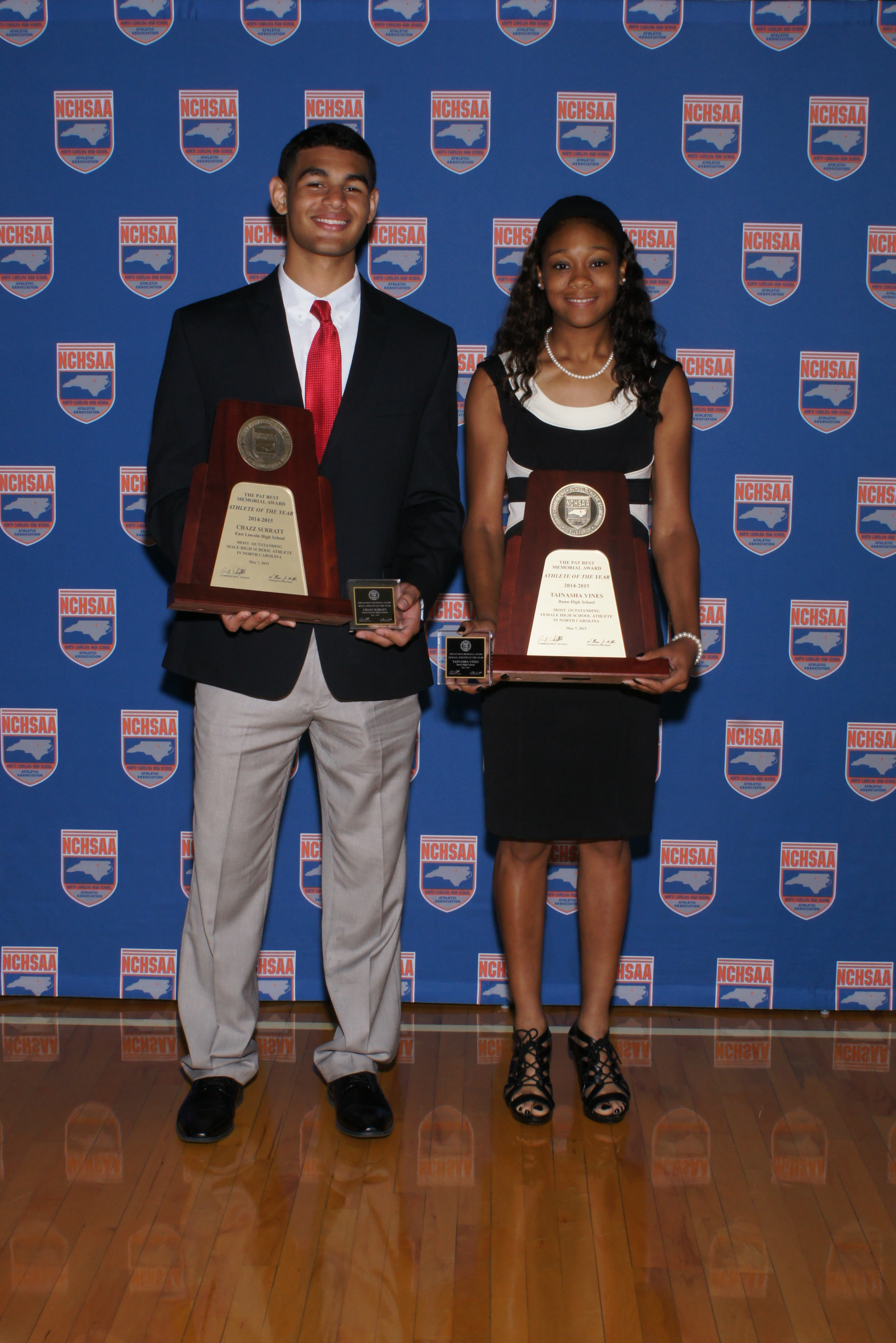 CHAPEL HILL --  Tainasha Vines of Bunn High School and Chazz Surratt of East Lincoln High School have been named winners of the 2015 Athlete of the Year awards by the North Carolina High School Athletic Association (NCHSAA).

These are the top athletic awards given by the NCHSAA to honor the most outstanding male and female high school athletes in the state. They were presented at the Dean E, Smith Center on the University of North Carolina campus during the NCHSAA's Annual Meeting on Thursday.

Both of the winners were selected by a special panel that includes media representatives from across the state. They were each presented with the Pat Best Memorial Trophy, named for the former Goldsboro High principal and president of the NCHSAA who died unexpectedly in 1988.

"On behalf of our Board of Directors and the entire membership of the NCHSAA, we congratulate these outstanding student-athletes on their tremendous achievements during their high school careers," said Davis Whitfield, commissioner of the NCHSAA. "Both have extremely impressive credentials which are in the same vein as previous winners of this award, and we certainly wish them well in their future pursuits."

Surratt has been an amazing two-sport star, leading East Lincoln to almost unprecedented success as the Mustangs football team went 16-0 and won the NCHSAA state championship and then the basketball team was unbeaten until it lost to four-time champ Kinston in the championship game.

Surratt, football Player of the Year in the Southern District Seven for the second consecutive year, was the Most Valuable Player in the state football final and finished the season with the third-best all-time record for touchdown responsibility with 73, including 51 TD passes and 22 rushing touchdowns.   He threw for 4,338 yards and had 5,621 yards in total offense, giving him 11.657 for his career.

In basketball, he averaged 20.0 points per game, 6.7 rebounds, 8.0 assists and three steals a game this season. He was also Player of the Year in the SD7 in basketball and was the Most Valuable Player in the Western Regional. He did all of this during the season on a torn meniscus in his knee, suffered early in the football season, and had surgery right after basketball ended.

He has committed to Duke University to play football.

Vines has had a remarkable high school career in a variety of sports, including earning state championship last spring in the long jump and triple jump in outdoor track and is an excellent possibility to repeat.

In volleyball, she was a four-time all-conference selection and was the Northern Carolina Conference Player of the Year in that sport as a sophomore.  She is the school’s all-time leader in kills in that sport and led her team to the third round of the playoffs.  And in basketball, she is a two-time Player of the Year in the conference and earned all-league honors four times. This year she averaged 20.7 points per game and 11.2 rebounds per game, and also posted a quadruple-double, only the fourth one ever in NCHSAA history.

She will attend the University of North Carolina at Chapel Hill on a track and field scholarship.

This is the 30th year in which awards have been given to the top overall male and female athletes.  Previous winners of the award include: