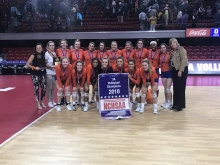 3A Championship: Marvin Ridge pounds out a 3-0 victory over Conley to win first Volleyball Championship

RALEIGH, NC – Marvin Ridge started out their bid for the school’s first volleyball championship in a tightly contested first set against unbeaten Eastern Champion D.H. Conley, but the Mavericks’ confidence was bolstered by the first set win, and they went on to sweep Conley 3-0 and claim their first Volleyball Title.

The first set saw 11 ties, the last coming at 16 all, before Marvin Ridge used a mini-run to stretch out the lead to 22-18. The Mavericks went on to a 25-22 first set win as Maggie Young slapped two of her 11 kills to the floor late in the set to spark the Mavericks win. 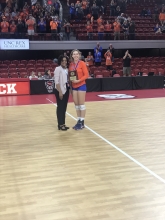 The confidence continued to expand for Marvin Ridge as the Mavericks ripped off the first five points of the third set. With a 24-16 lead in the set, and championship point, Russ blocked down a Viking attack to lift the Mavericks to a 25-16 third set win and an NCHSAA record 44th win of the season.

Russ finished the match with a team-high 12 kills and an assist. She was named the 3A Championship M.V.P. Marvin Ridge’s Adriana Jordan had 34 assists to go with 3 kills and 6 digs on the day.

NOTE: 2005 was the last time that all four NCHSAA State Championships were 3-set sweeps. That year, Hendersonville swept Trask in the 1A finals, Cardinal Gibbons downed West Henderson in 2A, Fred T. Foard bounced D.H. Conley in 3A and Providence beat Person in 4A. 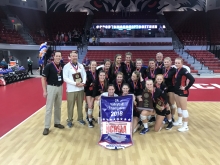 West Davidson came out of the gates on fire, scoring the match’s first 4 points as senior middle hitter Ashley Johnson pounded the ball to the floor four times in a row. But Currituck was undaunted. 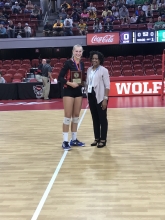 The Knights stormed back to tie the set at 4, as Merritt Woodson slammed one to the deck, and the match was on. The two teams traded points back and forth until the first set was tied at 10. That is when Currituck County went on a run to close out the set on a 15-3 run.

Johnson again lifted the Knights in the third set, coming alive with four kills in six points to extend the Knight’s lead to 18-13. Currituck held on for a 25-21 third set victory and their first state title. Johnson was named the match M.V.P. piling up 37 digs and 16 kills to go with a block and an ace. 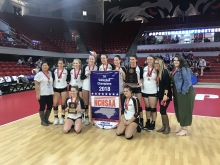 RALEIGH, NC – In a match that had two teams participating in their first Volleyball State Championship Match, it was Falls Lake Academy that rode some early momentum to a 3-0 victory over Polk County to win the Firebirds first NCHSAA State Championship.

Falls Lake came out swinging early winning the first four points of the match. The Firebirds rode that early confidence to build a 17-8 lead in the first set with a 9-2 run. The Wolverines tried to claw their way back into the set, as the Wolverines rolled off a 4-0 run of their own to respond. The Firebirds were unfazed as Hannah Collier would pound three kills to the floor in the final seven points of the set to help Falls Lake take the set 25-19.

The second and third set were both thrilling as the two teams tied each other during the sets on fourteen occasions, mostly late in the sets. After falling behind 20-16 in the second set, Polk County scrapped their way back to tie the set at 22. Junior Grace Lauer got into a nice rhythm, spiking balls regularly late in the set. The set was tied at 22, 23, 24, 25 and 26 before Collier gave the Firebirds a 27-26 lead before a lift call against the Wolverines closed out the set 28-26. 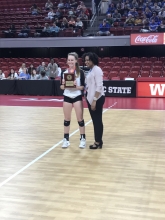 In the third and final set, the two teams were tied seven times, as Lauer and Marilyn Castillo provided some heavy hitting to keep Polk close. The Wolverines managed to tie the set at 19, 20, 21 and 22 late before match M.V.P. and setter Chase Teal ripped a ball to the floor to give Falls Lake a 23-22 lead. The Wolverines were called for a double hit to make it 24-22, before serving a pass over the net out of bounds to close the match.

Teal was named the match M.V.P. for Falls Lake Academy. Teal had 18 assists and 15 digs to go with 10 kills and 2 blocks. 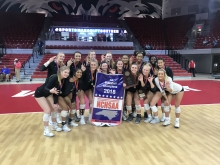 4A Championship: Green Hope wins third straight with a 3-0 victory over Panther Creek

RALEIGH, NC – The Green Hope Falcons secured their third straight 4A Volleyball State Championships, dominating conference rival Panther Creek 3-0 on their way to the 2018 title. The Falcons are the first 4A team to win three consecutive 4A Volleyball Championships. Sydney Dowler won the M.V.P. award for the third year in a row, helping set up numerous attacks for the Falcons as they cruised to the title.

Green Hope took the first set 25-15 behind a strong first set performance by Annie Elvin. Elvin recorded six kills in the opening set leading set in the category. Elvin finished the match with 12 kills. The Falcons and Catamounts traded points for the most part until Green Hope went on a 7-2 run to go up 15-10, comfortably keeping the Catamounts at arm’s length the rest of the set.

The Falcons second set was nearly the same script as the first. After falling behind 5-4 early, Green Hope stormed back to take 8 of the next 9 points to run out to a 12-6 lead in the set. 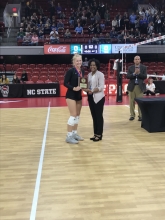 Panther Creek battled well in the third set, desperately trying to force a fourth set, but as the Catamounts drew within two at 20-18, Sydney Dowler powered a kill to the floor to put the Falcons up 21-18 and start the momentum rolling for Green Hope again. That momentum did not stop through the decisive point of the match as Pricilla Jones pounded the ball into the floor in the middle of the Catamount defense to send the Falcons into a joyous celebration for the third straight year.

Dowler finished the match with 34 assists, 6 kills, 14 digs, 4 blocks and a pair of aces. She became the first-ever three-time M.V.P. of the NCHSAA 4A Volleyball Championships. Only Hendersonville’s Molly Pyles who won four 1A Championship M.V.P. Awards from 1997-2000 holds more. Dowler joins Cardinal Gibbons’ Madison Bugg and Hendersonville’s Bailey Hunter as three-time winners.

2018 NCHSAA VOLLEYBALL PLAYOFFS FOURTH ROUND HIGHLIGHTS
MILESTONE WINS
Chapel Hill earned NCHSAA Playoff win number 70 with a 3-0 win over Cleveland. Chapel Hill is making their 32nd appearance in the NCHSAA Playoffs and have reached the Regional Finals each of the last two years.
Louisburg gained the school’s 75th playoff victory with a 3-0 win over Lakewood. Louisburg has appeared in 37 NCHSAA Playoffs. A win in the Regional Finals would secure the Warrior’s second State Championship appearance in three years.

Hendersonville secured the program’s 100th win in the state playoffs with a straight-set sweep of Mount Pleasant in the third round. The Bearcats were the first NCHSAA Volleyball program to reach 100 playoff wins.

In a thrilling five set match, South Granville stunned Carrboro, stopping the two-time defending 2A Champion’s playoff win streak at 14 games in a row. The Vikings won the final two sets to take the victory.

Hendersonville secured the program’s 99th win in the state playoffs with a five-set second round match victory against Brevard. The Bearcats will look to make history as the first program to reach the 100 playoff win plateau when they face Mount Pleasant on the road on Saturday in the third round.

Three teams won back-to-back volleyball state championships a season ago. Green Hope, Carrboro and Community School of Davidson all earned a second straight championship in 2017. Their playoff winning streaks continue now as they moved into the third round.

NEW QUEEN OF THE KILL

Vance County’s Emani’ Foster set a new state record for kills in a single match with 57 as she led her team to a five-set win over East Duplin in the 2A playoffs. Foster broke her own record, set last year while she was at Northern Vance, of 48 kills in a match against J.F. Webb on September 7, 2017. She finished the season last year with 598 kills, the second-highest total in NCHSAA history, behind only Enka’s Taylor Sauer who amassed 602 in 2012.

FOR THE VERY FIRST TIME ...

The first round match between Robbinsville and West Montgomery was postponed due to a bus accident involving the bus carrying Robbinsville’s volleyball team to the match. According to the Asheville Citizen-Times two players were injured and treated for minor injuries at a local hospital near the accident site. The game has been rescheduled for 5:00 p.m. today (October 24th) at West Montgomery.