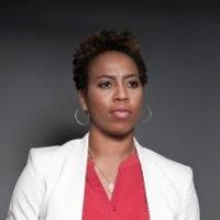 Chasity Melvin, a small-town girl from Roseboro, NC, pushed her way to NC State and WNBA-stardom from her outstanding roots at NCHSAA Member School, Lakewood High School. Melvin was one of five children for her parents Jimmy and Janey Melvin drawing much attention to herself and her teammates in 1994 when she led the Leopards to the 1A State Championship.

Playing alongside her sisters, Danielle and Jimmelle, Chasity poured in 37 points and snatched 21 rebounds in an 80-60 victory over Murphy to win the State Championship. At 6’ 4”, she drew national attention from college coaches and scouts but elected to stay close to home, attending NC State, where she excelled for the beloved Wolfpack Women’s Coach Kay Yow.

Melvin scored more than 2,000 points and had over 2,000 rebounds during her fabulous tenure with the Wolfpack. She helped lead the NC State Women’s program to the team’s first-ever Final Four appearance in 1998. She is one of seven Wolfpack Women’s players to have her jersey retired and hung in the rafters at historic Reynolds Coliseum.

After her four years at NC State, Melvin played for 12 seasons in the WNBA, spending time with the Cleveland Rockers, Washington Mystics and the Chicago Sky. Chasity is an author, radio show host, emcee, motivational speaker and philanthropist. Her devotional memoir At the End of the Day, is an outstanding personal account of her life’s journey and self-discovery.

She currently is an Assistant Basketball Coach for the WNBA’s Phoenix Mercury. Melvin has been inducted in the NC Sports Hall of Fame as well as the NC State University Athletics Hall of Fame. She was named one of the ACC Top 50 Athletes, a 2011 ACC Legend and was one of the NCHSAA’s 100 Female Athletes to Remember during the Association’s Centennial Celebration in 2013.