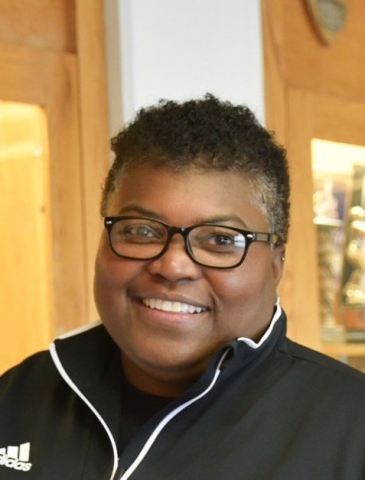 Sonita Warren-Dixon, formerly Sonita Gibbs, has been a star in the high school coaching ranks of western North Carolina for much of her nearly 30-year career in public education. Warren-Dixon began her teaching career at Hall Fletcher Elementary School in 1991, serving as a physical education teacher.

During her long career in education, she has served as a school counselor and physical education teacher at various times at both the high school and elementary school level after earning her Master of Education in School Counseling in 1996 at Western Carolina. However, her greatest mark may have been made as a basketball coach. She is one of the first, if not the first, African American female to serve as the Head Men’s Basketball Coach at an NCHSAA Member School. She is a trailblazer in her current role as Asheville High Athletic Director as well, making her the first African American female to hold an Athletic Director role in Western North Carolina.

However, her true passion was basketball and she spent seven seasons, 1996-2002, as the Assistant Coach of the Women’s Basketball team at the school. Then in 2002, then Coach Gibbs got a chance to be the Head Women’s Basketball Coach for Asheville. She took full advantage of the opportunity, leading the Cougars to three consecutive State Championships in 2003, 2004 and 2005.

Warren-Dixon’s Asheville team knocked off Rockingham County 62-52 to win the program’s first State Championship since 1987 in 2003. In 2004, the Cougars dominated Southern Durham to take a 64-47 victory for their second straight title. In 2005, Asheville stopped a tough High Point Central team 72-65.

She compiled an overall record of 185-89, including a 54-game winning streak in the 2003-2005 seasons. The Cougars were unbeaten in conference play all three of those seasons and boasted a 100% graduation rate with admission to college for all players. In 2011, Warren-Dixon accepted the challenge of coaching Asheville’s Men’s Basketball team. In five seasons at the helm, she piloted the team to a 64-54 record, including a 32-24 mark in conference play.

She was the Head Men’s Basketball Coach at Cherokee High for a year in 2016-17, posting a 19-9 record overall, 9-3 in the Smoky Mountain 1A Conference before returning to Asheville as the Head Women’s Basketball Coach where her teams have posted winning records in each of the last four years, including a 48-11 mark in conference play ad 70-25 overall.

Warren-Dixon’s long-time Athletic Director and friend, Rex Wells, talked about Warren-Dixon in glowing terms. “Sonita is an incredible lady. She has such rapport with her students and athletes that some of them refer to her as “Momma Vette”. She takes care of so many that may not have a parent at home, and she loves them unconditionally.” Wells noted that the two talk almost daily, even though he is now with Polk County Schools, and he considers her as his best friend.